To Make People Explore Women Writers, Artist Saheli Is Drawing 26 Of Them In Alphabetical Order 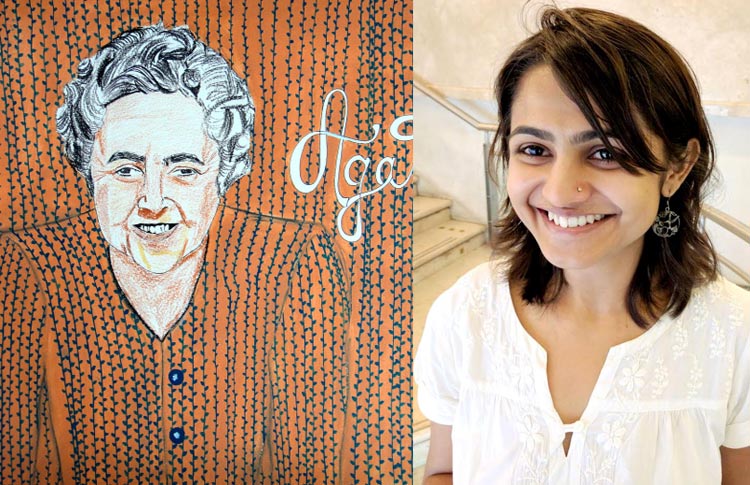 Bong artist Saheli Khastagir is an ardent reader and a little biased towards female authors. To club her interests in painting and reading, she’s started an art series that has a collection of 26 female writers in alphabetical order.

We asked her to share the detailed list of Indian and international women authors and poets who’ve spurred her to pick up the brush and paint, in turn, promoting their profound work in the world of literature. Excerpts below.

What made you think of drawing women writers?

I started #WriterlyWomen when I was on a short break from work. I was reading various female writers and decided to draw the most powerful ones, thereby explaining what I like about their writing style. For this, I made a website called 26portraits.wordpress.com.

So, who are your favourite women writers?

Number one has to be Daphne du Maurier. Her book “Rebecca” had a lasting impression on me during childhood, and it continues to be one of my favourites. I have forcefully made many of my friends and relatives read it (laughs).

Apart from this, I’m a fan of Joan Didion whose raw testimony to grief and aging in “Blue Nights” had left me softly weeping for days after I finished the book.

Are you fond of poetries?

Oh, ‘Fundamentalism’ by Naomi Shihab Nye is love. By the way, she’s my letter N.

When you began, were you ready with the list of 26 women writers according to the English alphabet?

Not really. This is because I didn’t want to draw the writers I wasn’t aware of. So I made sure I drew only those who were found on my bookshelf and Kindle. For example, I was stuck at letter ‘O’ when I got a suggestion to explore Octavia Butler. As I’ve mentioned on the website, I turned her devotee the moment I began listening to the audio-book version of her books. I can’t wait to add her books to my collection!

You’ve admitted to being addicted to Joan Didion. Has any other female write impacted you in the same manner?

Patti Smith has totally won my heart. I know she’s famous as a singer but come on, have you read her books? When I was in New Orleans, I happened to read ‘M Train’ and boy, I remember cuddle-sleeping with it during most nights. Obsessed much? Listen to this – when I read about her adventures of going to the Blue House in Mexico City, I was forced to go there myself. There I found the poem she wrote lying on Frida’s bed.

Mahasweta Devi, undoubtedly. She was also a strong socio-political activist.

Saheli is also a development/research professional (with a Masters degree in Psychology). If you want to explore her paintings exploding with deep human emotions, head to her page right away. Also, I recommend you to check out the hashtag #MHIllustrated that documents her artwork on various known and unknown mental illnesses. About this, she says, “I am working on a website that I aim to make an illustrated directory of mental health concepts. Each illustration is accompanied by a narrative in first-person. I hope it will serve as a platform for the common people who want to learn about every mental health concept that ever existed.”

(All pictures are Saheli’s own)