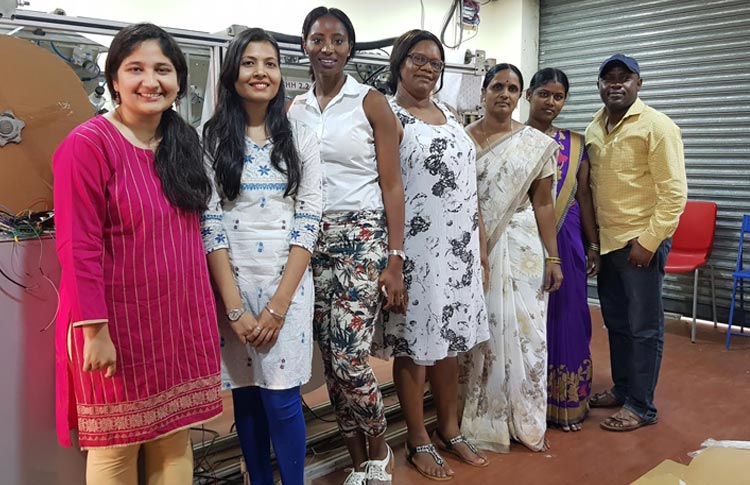 She is the founder of Saral Designs, a Mumbai-based startup that is working on increasing the access to high-quality affordable sanitary napkins using a smart distributed manufacturing technology.

An IIT Bombay alumnus, Suhani Mohan, along with her colleague Kartik Mehta, developed world’s first automatic and compact machine to make ultra-thin sanitary napkins. And it’s only been three years, but the pads sold under brands ‘Ultra Active’ and ‘Ayesha’ have already found a place next to Whisper and Sofy on store shelves.

Last time we spoke to Suhani, she had introduced us to the process of making these pads, and talked about their plan of reaching out to women in rural areas. Fast forward a year, and we’re seeing her far ahead on the success track. Conferred the title of ‘Pad Woman Of India’, Suhani was recently covered by Forbes India as one of the ‘Top 25 Trailblazing Women Of India’.

But her true success lies in the fact that Saral Designs has transcended boundaries and reached Bangladesh and Namibia! More updates below:

You’re currently in the process of selling machines; how far have you reached in terms of geography?

By April 2018, we will have reached Tamil Nadu, Karnataka, Gujarat, and outside of India to Bangladesh and Namibia. We’re currently in the process of conducting incubation programs that involve two weeks of training. The machine makes 10,000 pads in a day, so it is must that the market has a customer base of at least 20,000.

Having addressed menstrual hygiene, do you also plan to empower women financially through your brand ‘Active’?

So, of the six machines that we have sold, two buyers are women, and others that are bought by the NGOs are working for women.

You are titled as the ‘Pad Woman of India’. How does it feel, added responsibility or does it make you more driven?

Laughs. To be honest, it feels a little strange. Isn’t every woman a pad woman? For a man, it still makes sense to confer the title of ‘Pad Man’. And though I am just as driven, the response from people has definitely escalated.

Speaking of which, what do you have to say about the importance of involvement of men?

My co-founder is a man, and he recently wrote an article on his experience so far, on Women’s Day. I think the involvement of men is extremely important, and the reasons are varied. For instance, in rural areas, it is still men who control the expenses mostly, and they need to be made aware of the importance of using pads. Another reason is sex education; starting with menstrual talks is the best way to get there, they may not understand issues of consent and rape as easily as they would get that.

Also, I think there are more men like “Pad Man” in our society, and given the current societal norms, their involvement and participation deserves acknowledgment.

What concrete actions do you think are needed to convert the Padman-generated awareness into a more result-oriented campaign?

The movie per se shows the generic aspect of the person’s life, and though it has provided a good starting point, a lot more needs to be done. We have to go beyond the ‘padman challenge’ and have conversations with all those people who still remain unaware of the issues and problems, and make them get rid of the taboos that exist around menstruation.

Did you also have to deal with menstrual stigmas while growing up?

I come from an academically oriented family, so there wasn’t much that I had to deal with in my home, except for, of course, my mother’s occasional “at least bathe before you sit for puja, it is kind of dirty”, she laughed. But I remember, there were families in our society that wouldn’t let girls participate in their puja festivities if they were menstruating, and to the extent that they directly asked while inviting. I was kind of bold that way, so I used to go regardless, but for some people it is difficult to be defiant.

Ah, nice! Tell me, Suhani, did there ever come a point in your journey where you sought an external push?

Back when we had just started, there was a phase when nothing seemed to be working out. One day we were visiting my school to take a session on the vending machine that we had made, and even that didn’t work there. I was so embarrassed, almost on the verge of tears and giving up. But around the same time, I received a call from someone who had used the prototype of our pads, and she said that she was proud of me and that there should be more people like me in the world. And that, I must admit, brought me back on my toes and motivated me to not give up.

Wow! And lastly, from the start to now, has the manufacturing of pads seen any change; are you planning to incorporate eco-friendly ways?

Just recently we’ve done some pilot tests, using different materials to see how we could make our pads more eco-friendly, or sustainable. But these raw material checks usually take up to 6-7 months, and there is no such test that can certify any brand for eco-friendly pads, so before we claim it to be that hundred percent, we want to be really sure. However, our perspective has more to do with the machine functioning and manufacturing of pads and to make them accessible to more women.