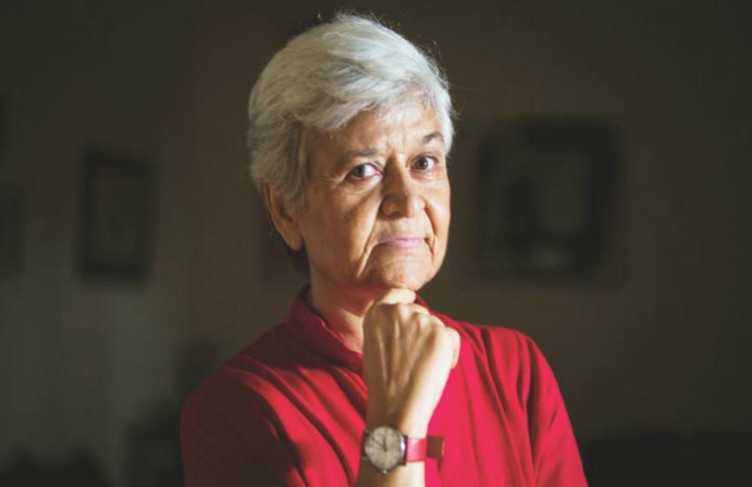 Kamla Bhasin is a name well known both amidst the feminist fractions of the country as well as among the ones who dread them.

It was almost 4 decades ago, a time when most of us weren’t even acquainted with the term “feminism,” that Bhasin decided to rewrite the sexist nursery rhymes.

Through her rhymes, she tried to subvert the practice of deciding gender roles for children and strongly advocated equality in all spheres. Her war was not just against the way society represses its girls but also against the toxic ideals of masculinity that it uses to burden its boys.

“In patriarchy, both boys and girls are pushed into certain kinds of job. Boys are taught to be tough and manly, not to cry and face the world like a warrior. Girls are taught household works and ethics that they need to follow after marriage,” she said in a recent interaction with IWB.

Bhasin is a woman known for always speaking her mind and never ever flinching while she does so. Recently, in the ‘Me, the Change’ podcast by The Quint, Bhasin shared how she was sexually abused as a child, how she grew up to be a gender activist, and how her daughter’s death shook her life.

On being sexually abused as a child

In the podcast, Bhasin shared that she was just 4 years old when a male servant at home lured her into sitting on his lap and then ended up abusing her sexually. “After that, over the next four years, 12 or 13 men, all connected to the family – teacher, tailor, father’s friend, older brother’s friend – did the same,” she shared. She also shared that she often imagines what she would do to all the men who dared to abuse her.

She said, “I wrote a book later, called, If only someone broke the silence. In it, I asked – I was an extrovert. I lived with my family with six brothers and sisters… How come I didn’t tell anybody about it? And I made a list of these thirteen fellows and thought about what I’d do to them all the time. When I grew up and became strong, (I thought about) what I’d do to these fellows, and I still do not know the answer.””

Bhasin recollected her painful memories of sexual abuse so as to support all the women who are constantly questioned for taking time to come out with similar experiences. “So when people ask now why women are speaking ten years later, I say it took me forty years to speak up. It’s because of the women’s movement that this is possible. Soon, this 10 will reduce to two, and one, and eventually young women will speak up on the same day and say, ‘Stop,’” she says.

“I really feel that what stops us often is our own fear. That’s why I like the title of your podcast – ‘Me, the Change’. Really it has to be me, the change. It can’t be, ‘You, the government, you change’. Or, ‘you, the police, change,’” says Bhasin.

She adds, “So ‘Me, the Change’ is something I’ve been saying and working for for 45 years. Encouraging them to change themselves. We have to walk on the two legs of change i.e. me, the change and society, the change. My emphasis has been on changing yourself.”

On protecting both the girls and the boys

Bhasin also talked about why there is a need to protect our boys as much as our girls. “With more conversation around the topic, what they’re discovering is – in many states like Kerala, they’re finding that more boys would have been abused. When you have girls, you take care of them. You don’t let them step out. But with boys, you don’t do the same thing. As a woman, I can speak out, but they can’t speak. It goes against their masculinity,” she said.

On her daughter’s demise and her battle with depression

In was in 2006 that her daughter, Meeto Bhasin Malik, committed suicide after her desperate fight with depression. Bhasin shared that Meeto started taking medicines soon after she was diagnosed with clinical depression for the first time but discontinued it after a while. “And the next time depression came back, she committed suicide. That’s been the biggest tragedy of my life and I feel that if I didn’t have this work, I would have perhaps collapsed,” she shared.

Meeto’s death hit Kamla so painfully and ended up impacting her marriage as well when her husband who suffered from bipolar disorder, got “involved with another woman who was the same age as my daughter.”

Bhasin, however, had her work to take care of and miles to go in her field. She sought some succor in the same and found it too. Her gender activism was spreading like wildfire and one of the most monumental moments arrived when her interview with Aamir Khan ended up becoming a big hit and was viewed over 11 million times on Youtube.

She says, “I can’t even begin to imagine that 12 million Indians would be interested in listening to this stupid fight. So when we talk about social media campaigns and ‘Me, the Change’ and all, (I think) ‘Yeah, good idea man!’ But look at what we’re competing with on the other side.”