Having Worked For Only Re 1, This Millionaire Kutch Artisan Dreams Up Her Road To Success 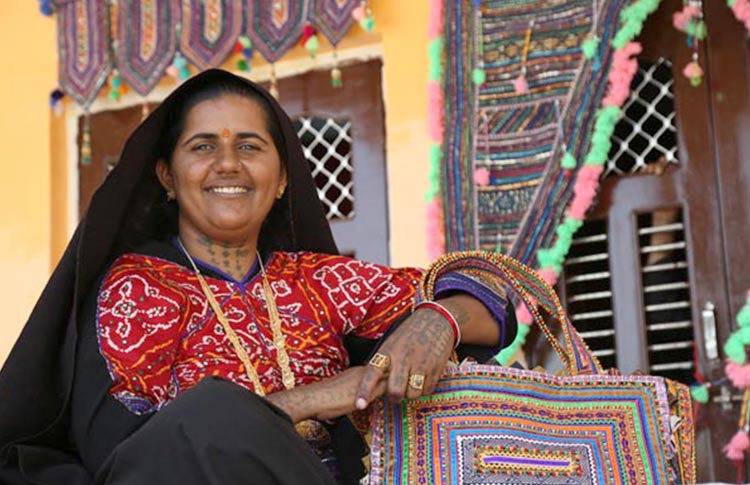 “Intelligence is the ability to adapt to changes!” Pabiben Rabari, an artisan of Kutch, Gujarat, has lived these words of Stephen Hawking, at every step of her life.

Eldest among three daughters, Pabiben has come a long way from being a ‘ben’ (Gujarati term for sister) to her two sisters, to now the world recognising her by the very name. Hailing from Bhadroi Village in Anjar Taluka of Kutch, she is the millionaire face of the “Rabari Artisans”, a community known for their beautiful embroidery designs.

Born and brought up in a small Indian Village, and at the time when not having “a man” in the house was even bigger a taboo in our society, the courageous woman took out on a unique path to success with her innate sense of art, belief in self, and unmoving support of her mother.

Now 33, a typical day in Pabiben’s life starts with house chores, extends to ten-hour work shift, and wraps up with some love-spiced food cooked by her mother, and quality time with family. She doesn’t forget to thank God for all that she has been blessed with.

Success stories are not rare to find, but only rarely does one find traces of humility and modesty in those stories. It wouldn’t be wrong to say that in our conversation with Pabiben Rabari, IWB found not just few, but many such traces. Shared below are the excerpts:

You have a team of 60 women artisans today. Tell us about their backgrounds, did they ever have to seek your support?

All of my team artisans come from similar families as mine. For a long time my village remained sceptic of my work and ways, but when they saw my work getting recognised, they all grew supportive. For me what was important was to help more women from my village to learn the embroidery work, to guide them on a self-dependent path, and my success helped me do that. Today, 10-20 of us work together at one place, and those who can’t stay out of home for long hours because of small children or other responsibilities, they “work from home”.

A strong advocate of the Gandhian Approach to Rural Development, Pabiben was recently honoured with the Janaki Devi Bajaj Puraskar (2017).

What strengthened the determination of Pabiben to succeed, any instance that dates back to your childhood?

When I was 5 years old my father passed away, and my mother was then expecting my third sister. I was too young to understand her situation then, the struggles of running a home and raising three daughters, but it didn’t take me a lot of time. I dropped out of school after class four, because neither could we afford the commutation fee nor did the situation allowed me to – I had decided that I’ll help my mother in her efforts to earn a living. She worked at people’s homes and farms, and together we used to go to and fro from the village well to the houses, filling water for Re 1.

“I always knew I’ll do something, and I never lost hope.”

How did you think of inventing the “Hari Jari” embroidery form?

My tribe, the Dhebaria Rabari, is known for its intricate embroidery art. Owing to a long-established custom, girls had to make embroidered pieces for their dowry, but when the elderly people realized its disturbing consequence, of girls staying at their parents’ home for until 30-35 years of age (It used to take good 1-2 months to make one dress-piece, even if the girls didn’t do anything else), they passed a diktat (decision) of ‘no embroidery for personal use’. I was around twelve then, heading a group of women (as the master artisan) that was funded by an NGO; my mother who was an embroidery expert herself had been my teacher. So to find other ways to keep the work running, I invented ‘Hari Jari’, and found an alternate method to keep the artwork live. We used trims and ribbons, and blended them with our prevalent embroidery art.

Take us to the start of your entrepreneurial journey.

For six-seven years I worked with the group, we had begun with lace-work and basic machine embroidery, but with time grew more efficient, and I started to conceptualize more designs for garments, cushion covers, quilts, and bags. I was then receiving a salary of 300 Rupees a month, which was a big sum for me.

I got married at the age of eighteen, and interestingly, the start of my home-making journey also marks the start of my entrepreneurial journey. (Excited she narrated the instance) Few foreigners had attended my wedding – our village used to see a lot of them in those days, charmed by Indian traditions, groups of them would come often. When they saw the bags made by me, they got very intrigued, and as a kind gesture, I decided to gift them a bag.

Little did she know that her small self-less deed would later serve to be the foundation stone to her journey, they took back the bag with them, which became an ‘International hit’, later popularized as “Pabi Bags”.

Tell us about the first success that you remember celebrating, a breakthrough moment, perhaps?

After marriage, my husband often told me to start my own work, he’d say, “You are so good at what you do, till when will you depend on others to take your products to the market!”. I knew he was right, but I was too shy and felt incapable of the marketing expertise that was required. I didn’t know how to meet and greet customers, but with my husband’s constant push and support, I eventually found a way. I slowly began to participate in exhibitions in various cities, and that helped me expand my business, and learn its skills. Where my team’s first order was of 17,000, for which we had collected funds from home, later we received our first big order of 70,000 from a store in Ahmedabad. We also received a grant from the Gujarat Government in 2015.

Pabiben’s current turnover sums up to 20 Lakh, and her husband who used to earlier run a Kirana Shop (being able to help her only as and when), has now shut his shop and works with her full-time.

How do you feel about being featured in the recently published book, ‘Millionaire Housewives’?

Her voice note amplified a bit, and in what sounded like a childishly happy tone, she shared with us the happiness that such small and big acknowledgments bring for her. “The people who were to write the book had met me at one exhibition in Delhi, a year ago or so. They later came to our village and saw the work, and even met my other team artisans. I feel honoured to have been featured in the book with so many other successful urban women.”

‘Pabi Bags’ finding their way to Bollywood (Luck By Chance) and Hollywood (The Other End of The Line) both, is another added feather in Pabiben’s artisan cap!

You are doing inspirational work, helping women take to entrepreneurship. Which are the other causes you stand for?

I am glad to be a means of inspiration and substantial help. I strongly support Girl Education. It is very important for parents to provide education to their children, girl or boy. I didn’t get a chance to study after class four, my situation was different, but it was that little education that I could receive that helped me realize the importance of school.

Pabiben has two sons, of age twelve and five. She has already got her elder son enrolled in an English medium School, and is looking forward to the admission of the younger one.

We have deep respect for the confidence you manifest in the traditional black dresses that you wear. Do they speak of some community practice?

I love dressing the way I do. It is how the women of my tribe have always dressed – black embroidered ghagra and choli.

She also shared with us a secret – “I have a lucky bag, which I always carry with me!”
(How sweet!)

Are there any customs prevalent in your community that you wish could fade away?

Yes. There are a few practices that our community people have been following since long, and their existence makes me rather worried. For instance, the amount of resources and money that a death ceremony involves in our village goes up to 1.5 lakh. And the belief of buying unaffordable gold is another issue, instead of utilizing the hard-earned money for education and better livelihood ways, people overspend it on buying gold in marriages.

Pabiben also expressed her views on ‘Community Wedding’ (Samuhik Vivah). According to her, it can reduce the management and economic stress on the families to a great extent. She hopes for her community people to realize and bring it in practice, soon.

“I love dressing the way I do. It is how the women of my tribe have always dressed – black embroidered ghagra and choli.”

We then asked Pabiben for sharing her three ingredients for the recipe of success.

In no time, she made us note:

Pabiben’s goal is to help evolve at least 500 women through her work. She has her own website (link below) and an Instagram page, a glimpse of which you must have caught above. Drop in at either of the platforms, to find lots of motivation and some very beautiful bags!

This article was first published on November 7, 2017.