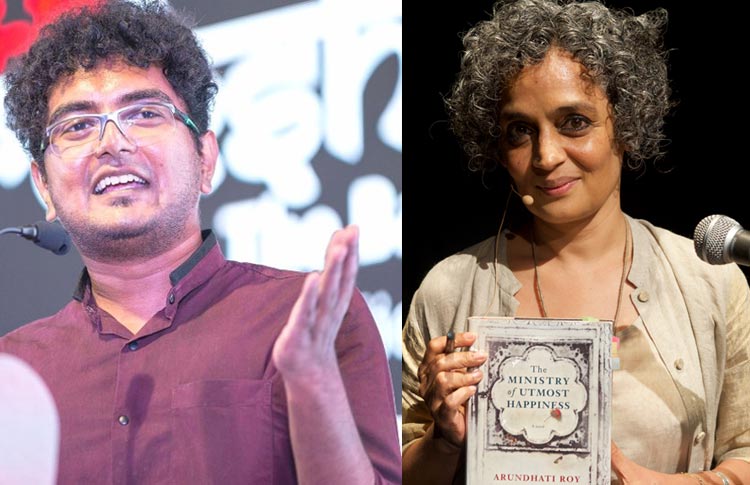 In my previous interview with Gopi Shankar Madurai, Founder of Srishti Madurai, a collective which explores the interrelations of nature, human, and society to celebrate all forms of life, Gopi had pointed out, “While referring to the LGBTQIA+ community, the real issue lies in failing to understand the difference between sex, gender, and sexuality.”

(You may read Gopi’s entire interview with IWB here)

Recipient of the Commonwealth Youth Worker Award, Gopi represented Hinduism & LGBTQIA+ community at the World Pride Madrid 2017, one of the biggest LGBTQIA+ events of West supported by United Nations and European Parliament.

Zir (a gender-neutral pronoun) final speech on the issues related to Intersex community and their struggle to make the world understand the existence of their identity was tabled at Spain Parliament on 29th June and received a standing ovation from the audience.

However, during the Madrid Summit, Gopi Shankar shared chair with Dr. Katrina Karkazis who is best known for her book, Fixing Sex: Intersex, Medical Authority, and Lived Experience.

“It was during my conversation with Dr. Katrina,” says Gopi, “that the topic of the acclaimed author Arundhati Roy’s latest book, ‘The Ministry of Utmost Happiness,’ came up. Like me, she too agreed that the book’s one of the protagonists, Anjum, is a complete misrepresentation of the Intersex community.”

Gopi also quotes noted Intersex activist Hida Viloria statement, “I noticed in an interview that she used “hermaphrodite” and then later used “trans” to describe the same characteristic. very irresponsible of her as a writer to not research the character she is writing about enough to know what. they are.”

Gopi reflects on the character of Anjum and says, “Initially, Anjum is described as an Intersex person and later on, she is said to be a Hijra.”

“I am an LGBTQIA+ activist myself and I’m not averse to the Hijra community. However, being identified and misrepresented as what you are not and do not prefer to be identified with is absolutely wrong,”  ze continues.

With an example, Gopi clarifies, “Imagine, Jayati Ji, that you are a female and you identify as being one. However, people identify you as male, wouldn’t it upset you?”

“Sex is a biological identity it comes along with the birth that is Male, Female and Intersex, and Gender is a role. There are over 58 gender identities and there are more than 15 types of sexual orientations. Sexual orientation is what we are attracted to. But, in India many are not aware of the difference between the word Sex and Gender,” continues Gopi.

Further explaining the diverse Indigenous gender minority communities in India, Gopi says,  “Sangam literature use the word ‘Pedi’ to refer to people born with Intersex condition, it also refers to antharlinga hijras and various Hijra, The Aravan cult in Koovagam village of Tamil Nadu is a folk tradition of the trans women, where the members enact the legend during an annual three-day festival. This is completely different from the sakibeki cult of West Bengal, where trans women don’t have to undergo sex change surgery or shave off their facial hair. They dress as women still retaining their masculine features and sing in praise of Lord Krishna. Whereas, since the Tamil society is more conservative and heteronormative, transwomen completely change themselves as women. In the ancient times, even religion has its own way of accepting these fringe communities. From The Nupi Manbis of North Eastern India to The Bachura Devi worship in Gujarat and Jogappa cult of Karnataka are the other examples. There are even different kinds of dialects and languages that are spoken by these communities which differ from region to region. Like, ‘Hijra Farsi’ is the transgender dialect, a mix of Urdu, Hindi and Persian spoken in the northern belt of India, Pakistan, and Afghanistan, and ‘Kothi Baashai’ is spoken by the transgender community in Karnataka, Andhra, Orissa, and parts of Tamil Nadu.”

“They even have sign languages and typical mannerisms to communicate. The peculiar clap is one such, but they were very clear about Intersex people and referred them as Mabedi Usili and gave a distinct identity to denote them. Students from across the globe come to Srishti Madurai to know, learn about these diverse indigenous gender minority communities. And, when you see such an acclaimed author, who has an enormous base of readers worldwide, portraying the community in a wrong light, you are pushing us back 10 years. All our work towards spreading awareness that, yes we exist and we are different from Hijra community or Transgender community, goes in vain, just because one author doesn’t take into account the need to research her subject well.”

Gopi further asserts, “You cannot club these diverse communities into one and homogenize these varied communities.”

“Intersex people are known as Mabedi Usili, Antharlinga Hijra, Idailinga in native communities but Arundhati Roy simply misrepresented my community and sex identity. She needs a proper understanding of Sex, Gender, Sexual Orientation among native IGM communities with huge diversity in Asia and its subcontinent,” Gopi explains in zir tweet, too.

“Intersex people or a person with Intersex traits are not a Hijra or a Transgender person. She failed to define and differentiate the differences in the diversity this is kind of homogenizing Intersex people as Hijras,” ze adds.

Making money off how “interesting” a story #intersex people make, w/o taking the time to learn who & what we are, is really not okay. https://t.co/PkVmxnIF2U — Hida Viloria (@HidaViloria) July 7, 2017

Gopi maintains that Arundhati has all the rights to frame a story, but, ze feels that if one is writing about a certain community, they should research about it and get the facts right, at the least.

“We have struggled so much, Jayati Ji, just to popularize the word ‘Intersex’ and to establish our existence and identity and when progressive writers like Arundhati misrepresent us, so many people will get the wrong understanding of our community.”

I ask Gopi to break down the basic differences between Hijra and Intersex so as to give our readers a better understanding of the terms.

Gopi then explains, “Intersex is a sex identity whereas Transgender is a gender identity. All Hijras come under Transgender umbrella but not all Transgenders are Hijras. Intersex people are born with ambiguous reproductive organs and/or may have several variations in sex characteristics including chromosomes, gonads, sex hormones. Whereas Hijra community is one of the oldest gender identities in India and has their own language, traditions, rituals, and code of conduct. A few of the Intersex people choose to identify as the modern day trans people but that’s not the identity of our entire community.”

“Calling us Hermaphrodite is derogatory and we do not prefer people using this term for us. You don’t grow up to be a Hijra. So why are you attaching this stigma? Why are you homogenizing our people?” questions Gopi.

I further inquire Gopi on what change or modification or rectification the Intersex community and the activists seek from the author to which Gopi says, “She can just upgrade or reprint with one extra page address defining and differentiating the Sex, Gender Identities with a clarification on Intersex and Hijras.”

This article was first published in August, 2017.