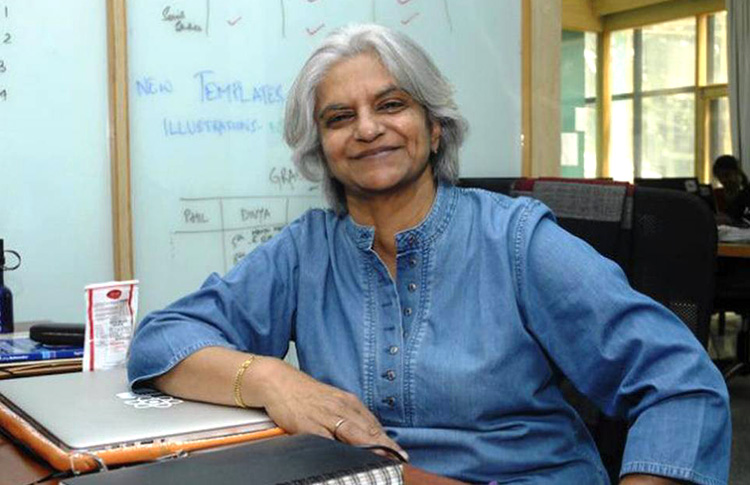 No, don’t ask your kids to keep that tablet down. There lies the world beyond our imagination in it!

Did you know about Meghshala (the School on Cloud)? An initiative taken two years back, this not-for-profit organization aims to educate the students in a fun way by empowering teachers to be creative inside the classroom.

This enterprise was started by Mrs. Jyoti Thyagarajan when, near her retirement, she felt the urging need to reach out to the kids across the nation who didn’t have the privilege of an excellent teacher. But how can just one individual change the course of 40-50 million kids?

Mrs. Jyoti was able to do that too when she met Mr. Sridhar Ranganathan. He too wanted a radical change in the education system and had already developed CloodOn.

Now, what are two people with a progressive idea and a leading technological system? Change-makers!

From there started a journey of two people with a common goal in their heart, a revolutionary procedure of twisting and tweaking the process of learning. They gathered a bunch of teachers to create interesting lessons on various subjects for kids from class 1st to 8th and uploaded it on CloodOn.

It has been two years, and they have reached out to 300 government school teachers in the rural and urban area of Bengaluru, Tamil Nadu, Telangana, and Pune. They teach students in English and other vernacular languages through which the dream of accessibility becomes a reality.

Recently, I had the opportunity to have a conversation with Mrs. Jyoti Thyagarajan and let me tell you that she doesn’t sound like a teacher with work experience of 45 years. I expected a cold, dull hello and instead was met with a warm one. Indeed she has been breaking stereotypes.

When I was shamelessly stalking her, I came to know that she has been a high school math and physics teacher.

Introduce yourself as a mathematical equation, I asked?

I knew she found it stupid the moment she exploded into laughter. Nevertheless, she was quick to hand me a profound formula in which she explained her wish for equality. So according to her, the equation would have been E=equal.

Continuing my mathematical analogy, I inquired ‘what has been the biggest addition/multiplication in her life?’ She continued to explain how through this NGO she and her colleagues are aggressively multiplying the skills of teachers and their number itself. They are teaching them how to make a lecture a fun learning activity because their ultimate goal is to impact the children and what can be a better way of doing so than transforming a class into a playground of ideas.

Mrs. Jyoti worked in Kenya and  Zambia for a long period before moving back to India. ‘Why did you move back? Was it because of your family?’

Well, it turned out that she moved back for her son. He was earlier living with her parents because she and her husband used to work in Kenya. ‘My son was entering his teen years, and during this period, it is better to have parents by your side,’ she remarked.

Jumping from personal to professional, I knew this would be a correct time to address the elephant in the room, ‘How did you reach out to so many teachers since people are generally not entirely acceptable of such technological advancements? They are used to papers, notes, and a general chanting so did you not face any opposition?”

‘I believe that the whole world is becoming open towards technologies. No doubt that we received some opposition from a few people, but that was an ant in front of the support we procured.’

She also explained how it was all about the introduction or stepping into the government school. ‘Maybe due to my gray hair people invited me to their classrooms willingly plus with a teaching experience of over 45 years I became known in the education system, and people knew my motives were healthy. Here my name went ahead of me, and that is how I empowered teachers. I wanted to impact the children since they will act as collateral and at the same time will make India livable too.”

She added that ‘generally the teachers would voluntarily call them to learn more.’

Since Meghshala’s mission is also to ‘Make learners and thinkers, not memorizers,’ I requested her to ‘give me an example where these children were able to implement theory into application.’ Mrs. Thyagarajan couldn’t exactly pinpoint one and instead told me that ‘they have applied every trick in the book, but learning a new way comes in 3-4 years, though huge changes are visible as kids are learning in and out of the classroom, their ideas have changed, and their way of conversing has changed.’

Their mission also includes their 2020 agenda in which they’ll have 1,00,00 teachers working beside Meghshala. And when asked about its implementation, Mrs. Jyoti used the concept of natural acceleration to chalk out their plan.

‘By using tech products we are trying to energize and up-skill our teachers because we already have the natural acceleration towards success, in fact, we touched it within the first six months of our inauguration. You know there is a tipping point? And when the whole process tips at the right time there is a runway success. Teachers are already coming forward, so I know that by 2020 we’ll be able to complete our mission successfully.’

Meghshala also operates in rural areas and knowing the discrepancy in understanding between a rural and urban teacher, I asked her the same. ‘Rural teachers are so eager to try this, so they are much faster to learn and understand this whole concept while the urban teachers have already seen it, so it isn’t a great deal for them. I am just so happy with how far the teachers have gone, and their changing mindsets will definitely be an asset for our community.’

Since we all know that education is a group activity, I wanted to learn about the role of parents and how they can access CloodOn. She told me that this system isn’t accessible for parents rather this is purely for teachers, so they have been encouraging teachers to maximize its utilization.

It can be next to impossible to have an empire built without the support of family. She eagerly told me how her son constantly gives her ideas on apps and very much every part of the process. Her husband has been generous enough to give away all the savings to start this NGO.

I am sure Mrs. Jyoti has inspired you enough to break out of your comfort zone and educate the children around you to be thinkers. Her philosophy of ‘kids must learn by doing’ has guided innumerable teachers across India so why don’t you become one of them?