You Don’t Need To Punish A Dog Or Be A Man To Train Them, All They Need Is Your Love: Shirin Merchant 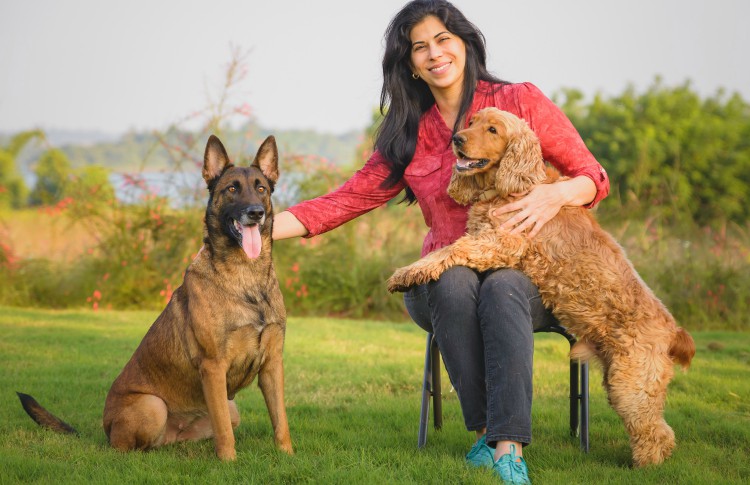 “‘Women can’t train dogs, disciplining dogs needs a man who will appropriately punish and scold them’- these were the two myths that I wanted to break when I became a canine behaviorist and trainer. I wanted to make people understand that not only can a woman train a dog but also you don’t need harsh measures to discipline pups, who just need your understanding, patience, and love,” said Shirin Merchant, India’s first qualified canine behaviorist.

Known for her compassion and care towards our four-legged friends, Shirin is also the first in India to excel in canine behavior psychology to tackle issues in dogs like aggression, shyness, high energy, etc. As I chatted with Shirin, with a hot cup of tea to keep me company, she narrated her journey of 23 years, where she has worked hard to ensure that dogs are treated with love and understanding and trained via positive methods.

What was it that led you on the path of becoming a canine behaviorist, a profession that was unheard of at the time in India?

I was born in a family that had many pets, who were family to us. So, compassion towards dogs was always there, I don’t think I chose the profession as much as it embraced me. It was 1995 when world-renowned canine behaviorist and trainer John Rogerson in England came to India and I coincidentally met him, after which he invited me to study abroad about dogs and their psychology.

But when I came to India after four years of studying, I realized that one, there were hardly any women dog trainers as women were considered too weak to discipline them. And second, dog training was being carried out using primitive methods of intimidation and pain; and dog behavior was unheard of. If a dog was aggressive, it was deemed rabid and put to sleep. A dog is never a bad dog, they are either misunderstood, frustrated, or are trying to say something to their human.

So, these issues you faced on your return to India, how did you work through them?

There were a lot of challenges. Like when people would meet me regarding their problems about their dog, they would look at me and raise the doubt that ‘Oh, but you are a woman. How would you know what to do? We thought that the trainer would be different.” Also, it didn’t help that what I was bringing was an entirely new concept of teaching dogs, something they were not used to.

There was a lot of criticism, people who put me down. Till date, it is a male-dominated field and people still ask me whether I would be able to handle a rottweiler. And that’s when I tell them that if you have the brain, then you don’t need to have the brawn to train the dog, so any woman can do it.

You are not only the first canine behaviorist but also the first woman to be one in India. But even today, the number of women in the field is less than that of men.

But I am still happy to see the ones who are there as compared to when I started out, there were hardly any. I’ll like to tell these women and to the ones who are hesitating to take up this field, today the world is more open, do what you love, don’t wait for that ‘one day’.

So, you like to understand a dog’s behavior, understand what they are feeling which sums up the equation of why they are behaving in a particular manner.

Every living creature on Earth wants two things in life primarily- respect and kindness. So, when a dog comes to a house, he wishes that its inhabitants will treat it well, that it will become his or her home. When a dog is aggressive, shy or anything that is out of the ordinary, it is because something happened in the past that has shaped their behavior, something traumatic, something that had a lasting effect on how they react to certain things.

So, their past influences their strange and often unwanted behavior. Have there been any such cases where a dog owner had more or less given up hope on changing their dog’s behavior but you were their knight in shining armour and succeeded in transforming the pup?

I have one recent incident for you. This happened a few months ago, it was a labrador who was adopted by a family which also had many elderly members. But it was a lively little puppy, to put it politely. And eventually, the issue magnified, the puppy started to bite their hands, jump on people. They hired trainer after trainer but nothing worked out. Then they sent the dog to a kennel, spent about a lakh there. It was then that I received a call from them, as they said I was their last hope or they would have to give the dog away.

In fact, on the day of the appointment, she couldn’t come as the dog had jumped on an elderly neighbor who fell down and fractured her arm, so they had to rush her to the hospital. Till date, she had spent around 6 lakh because of a dog she had adopted. What I basically understood from the dog’s behavior was that it is not a bad dog and when he behaves the way he does, it was because of some trauma he went through in the past and it was his insecurities that were showing.

When I told the owner this, she started crying because she had misunderstood her dog, thinking that his disobedience was on purpose. Like many others, she had resorted to disciplining the dog, scolding, punishments, thus making the already traumatized dog more insecure. We worked through a whole new system where we taught the dog how to let go of his stress and how the owner should respond whenever he loses that control. She has sent me messages, thanking me and saying that while her dog still, sometimes, behaves aggressively, she knows how to react in a way that calms him down.

A victory in the end! I have always felt that when it comes to crucial life lessons, one can learn a lot from dogs, after all, they are human’s best friend.

They teach us something as basic and simple as unconditional love, forgiveness. How many times have we shouted at our dog as we left for work but when we return in the evening, they are there at the door, wagging their tails, just ecstatic to see you. Try doing that to your husband/wife one day, you’ll come home to a prolonged 48-hour drama!

But dogs forgive and prefer to live in the present, they never hold grudges. If they have a problem, they don’t sit on it for ages like humans do, they immediately express it. These are all lessons that we can surely learn from.

As you shared that even dogs who are pets often get punished and scolded by their owners, what about the ones on the streets, the strays dogs who are often beaten, get stones thrown at them by bystanders for no reason at all?

I feel that the people who do this are not cruel but just frightened. When someone is afraid of something and doesn’t understand it, they use aggression to keep themselves safe. That’s why, I, with my students, go to school, corporates, hold workshops to educate people about dogs because then you understand these misunderstood creatures a little better, you’ll not see them as something which will hurt you. When you do that, you’re unlikely to hurt the animal first. We teach people signs to know when a dog is aggressive and may bite you, so they are not unnecessarily frightened.

For the past 23 years, Shirin has has helped dog owners across the world with behaviour and training problems including, dominance, house training, toilet training, aggression, and compulsive behaviours. She has worked with over 6,000 dogs with breeds ranging from the feisty Belgian Malinois to the shy Samoyed.

Is it possible to do anything at the government level for these stray dogs?

You see, people are all about breeds, husky, labrador, etc and not interested in these ‘local dogs’. When they get a dog, it is for showing off. There are some NGOs who are actively working on rescuing stray dogs and getting them adopted but it is still developing and it needs government support to blossom. If the government promotes it, on social media and on television, run a good campaign for the welfare of our indie dogs, I think that will make a change in how people see them and they may even take them home.

I myself hope that it works out. You see, dogs understand us, support us when we are in dire need of it, they are amazing at helping. You may have heard of dog therapy, currently a rather less explored field, where dogs are specifically trained for differently-abled people, children with special needs, and for those suffering from mental illnesses. But dogs even help us as we live in a world with a plethora of mental stress, be it adults or kids, which we don’t talk about.

I have countless stories of people telling me ‘my dog helped me go through a difficult period in my life’, ‘my pup helped my mother recover from cancer.’ These are just dogs doing what they do best – love.

431 Likes, 8 Comments – Shirin Merchant (@shirinmerchant) on Instagram: “You can always tell about somebody by the way they put their hands on an animal. – Betty White . ….”

In 1998, Shirin conceptualized Canines Can Care, India’s first organization dedicated to pioneering a variety of canine-related activities in India. It trained the first civilian dogs for search and rescue work in India. In fact, the ‘Canines Can Care’ search dog team was the only one representing India in the aftermath of the Bhuj earthquake in 2001.

But even then, as I earlier mentioned, these little angels are beaten up by people often for fun. Aren’t there are any laws which can protect them from further abuse?

Actually, there is a law, The Wildlife Protection Act, 1972, that was enacted to protect plants and animals. But it is so archaic, that its presence now is more or less futile. It is like ‘Hey, I ran over your dog, here is Rs 500 as fine, now I am free.’ Does that sound like a punishment? The punishment should be such that it acts as a deterrent to anyone who dares to hurt these creatures intentionally. The changes that should have been made in this law are long overdue.