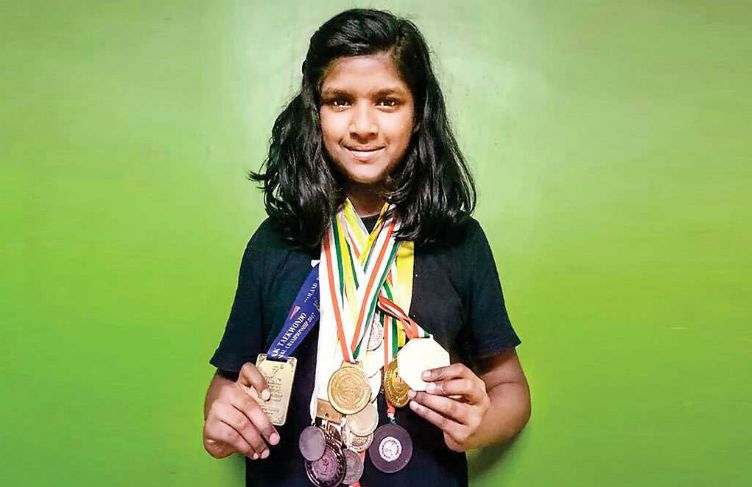 For 14-year-old Mumbai-based Shreya Jadhav, choosing taekwondo as a sport to invest time and money in, came out of the need for her parents to ensure that she learnt self-defense techniques in order to protect herself.

She started training at the age of four when renowned taekwondo coach Bhaskar Karkera observed her potential to excel in the sport and subsequently approached her father to encourage her daughter to pursue it earnestly. “He felt that she had great potential and with intense training and exposure, could easily represent India internationally. We were amazed but felt that we should give her a chance, as he must have seen some spark in her and as parents, we should help her hone it too,” shared Nitin Jadhav, Shreya’s father.

With her remarkable talent, Shreya, at the age of nine, started participating in local competitions that won her many medals. In 2017, she grabbed the spotlight as she claimed gold at Mumbai General Cup National Taekwondo Championship. What followed was her participation in the 7th Tirak Taekwondo International in Thailand where she bagged another gold. But, while Shreya, already India’s U-14 taekwondo champion, dreams of participating in the 2024 Olympics, financial constraints of a middle-class family come in the way of her passion.

“For any athlete to qualify for the Olympics, they need to register and earn ranking points in the Global Membership System (GMS). Shreya can only achieve this if she participates in international competitions in the next five years,” shared Nitin. “In 2017, I was able to send her to Thailand for an international taekwondo meet, where she won the gold medal. But that wasn’t enough. She needs to take part in a lot of international competitions to even qualify for the Olympics and sadly, that’s beyond our capacity. But I don’t want my daughter’s dream of participating as India’s representative and winning an Olympics medal in 2024 to fail as she has repeatedly proved her mettle at various platforms. I felt that crowdfunding would be the answer.”

Having joined hands with a crowdfunding platform, ImpactGuru, Shreya’s parents hope to raise Rs 20 lakh that will help her cover her advance training expenses and participate in international taekwondo competitions for Olympic qualifications.