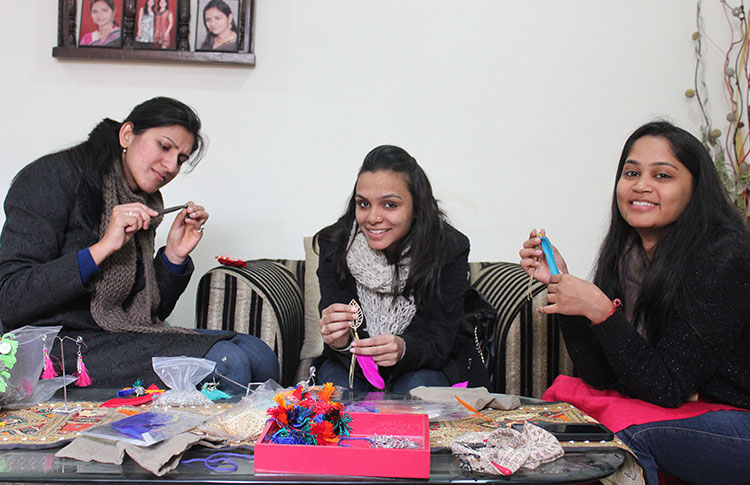 Dreamcatchers, feathery-earrings, tribal jewelry is fascinating. And, honestly, if you think you can easily make it all at home, you’re WRONG.

Because, with the same sense of conviction, we headed off to Pranshuta’s place. However, when we reached there, things were different.

Imagine a dense forest, with the thumping wet sound of percussions playing somewhere at a distance, now imagine a few Gorillas find some complex tools, a little more complex than what the Early Man had discovered…

What do they do?

Needless to say, Mansi, Shreeya, and I had the same expression when we got into the details. we buckled up, scratched our backs like Gorillas and it all began.

“How difficult are they to make?” Shreeya smirked.

“Once you learn how to do it, it’s not difficult at all. If you know how to use a pair of pliers, it will be even easier.”

We decided to trust her, and while Mansi’s attention was fixed at the feathered bookmarks, Shreeya and I listened to Pranshuta like sincere students.

She dug out a tiny ring from her tools and showed us how it was done. She began by tweaking the ring, so that it would have enough space to let a tassel in.

She then went on to lock the ring & the tassel on the earring.

And then, I called it!

One by one, Mansi and I failed miserably, and Shreeya seemed to be pretty much an expert on the second one.

Mansi said, “Can we also make those feather bookmarks?”

With most of my concentration on the biscuits sitting on a plate not far from me, I continued to babble to Mansi, “Don’t be so greedy.”

“Are you sure you’re talking to me?” Mansi said.

“How long have you been doing this, Pranshuta? You’re so good at it!” Shreeya curiously asked.

“It’s been about a year and a half since I started with jewelry. I’m also a fashion blogger, otherwise.“

We’d met Pranshuta at the Rajasthan Heritage Week, and she’s flying to Pune with her husband, probably now, as I’m typing this, for another exhibition.

It was finally the turn to fulfill Mansi’s desire, who had basically been only waiting for this moment.

While Mansi waited for the feathers, I was honestly desperately trying to get a tassel inside the tweaked ring.

And after a lot of efforts, I SUCCEEDED!

Now, I could easily calm down and chill, maybe even munch on a few biscuits while Mansi and Shreeya would make those bookmarks. Tehehe.

We absolutely loved the bookmarks and, really, we were lucky! Pranshuta had already wrapped some bookmarks as gifts for us.

But, Shreeya had some kinda special love for the earrings.

Now, there’s a new added FEATHER to our caps (literally). Oh yeah, we can make our own jewelry now!

Before we took off with the gifts, Pranshuta also told us that it wasn’t just her who was making all the jewelry. See the tassels?

All done by her grandmom & mom. Well, clearly now, we can tell where Pranshuta’s love for jewelry and creativity comes from!

Dreamcatchers, feathery-earrings, tribal jewelry is fascinating. And, honestly, if you think you can easily make it all at home, you’re probably right. *wink*