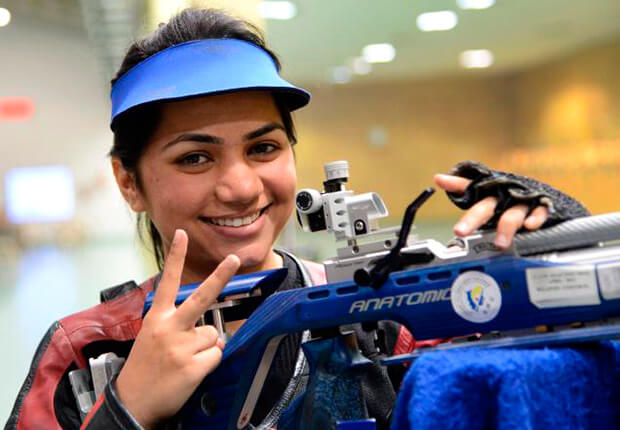 World number one in women’s 10M Air Rifle, Apurvi Chandela, partnered Deepak Kumar to win India their fourth gold medal on the concluding day of the ISSF World Cup in Rio on Monday. The result ensured an unprecedented top finish for the country across all four ISSF World Cup stages this year.

Champion Apurvi describes herself as a quiet girl with rock-hard determination, who believes in ‘utmost for the highest’; and her highest aim is Olympic Gold next year.

We stole a few minutes from Apurvi’s busy schedule for a quick shoot-out.

India is proud of you. How do you feel when girls and boys come up to you and say you are their role model?

Apurvi: I myself was inspired by Abhinav Bindra. I started shooting after watching him win the gold in Beijing. How humble of people who look up to me and get inspired! I feel so good to be someone else’s inspiration. My message to them is to just aim for the highest, do whatever it takes to get there and don’t be afraid of the hard work.

Tell us about your hobbies.

What was your unforgettable moment in the sport?

Apurvi: When I stood for the first time with a Gold medal and saw the beautiful Indian flag flying high with National anthem echoing in my heart at the Common Wealth Games 2014. This sight filled my heart with pride and eyes with tears of pride.

What is your highest aim today?

How would you describe Apurvi in one word?

Excerpts from the interview published in 2017.