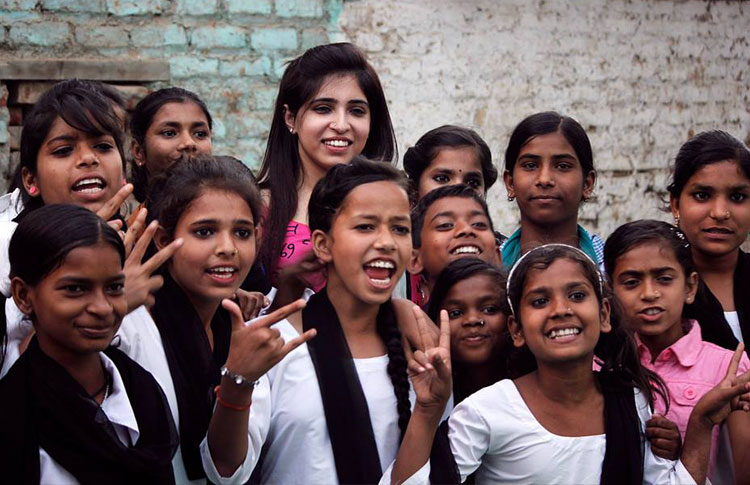 “Do what you can, with what you have, where you are.” Young and dynamic social worker Rashi Anand, has lived these words of Theodore Roosevelt, every day of her life.

Daughter of Jharkhand-based social activist, Poonam Anand, Rashi took on her mother’s instincts and set out to work for the underprivileged children and women, at the tender age of eighteen.

“Once when I was a small child, a woman had come to my mother for help. She was trafficked by her parents, and the man whom she was sold/married to, exploited her and got her private parts stitched to ‘keep her character in check’. And when she sought help from Police, they gang raped her. I was too small to absorb all of it back then, but it left a huge impact on me,” shared Rashi.

With ‘hands to hearts’ as her motto, Rashi, through her NGO Lakshyam, is encouraging people to do a heart-touching deed to help better the lives of those who are in need. Find the excerpts of our conversation with her below.

You started while still in college, tell us about your first steps?

While growing up I always remained conscious of my mother’s work, who was a Social Activist in Jharkhand (my hometown). But my first real effort shaped up in the form of collecting toys for children whom I saw playing with tire tubes at street lights. Which was shortly after I moved to Delhi for college. I started a Campaign under which we collected toys and books from various schools and then gave them to those children.

A particular school, Golden Bell’s Principal played a huge support. He gave us space to install a box in their school and helped contact other schools, too. Students of all the schools were asked to donate their used toys and books, and that came as a big help.

Then when did you think of expanding?

So we ended up collecting thousands of toys and books, but while the children happily took the toys, they showed little to no interest in reading books. Which left us with an initial collection of around eight-thousand books, and we had to think of ways for their appropriate utilization. That’s when we got to know of a little village in Himachal, Naddi. A school there acknowledged our request and we sent them books in lots. And alongside, we also rented a space in Delhi’s biggest slum and created a library for the children. That’s how ‘Laskhyam’ took birth and thereafter the expansion began!

Established in 2004, Lakshyam is currently functional in 11 states of India with 13 centers. ‘Lakshyam Toy Library’ is a need-based approach, the other program, ‘Butterfly: Child Welfare & Education’ offers holistic education to children, and ‘Rooh: Awakening Women’s Soul’ is designed to empower women.

My parents, who not only are my biggest supporters, but also my source of inspiration and motivation. And though with time, a lot of people have joined me, I can never forget the support I received in my endeavors from my college friends. I used to live in a PG hostel in Delhi, and had no vehicle to commute to different and distant places. So my friends would volunteer to come along, and loading everything in their cars, we’d go to all the possible street lights and areas under flyover to reach out to the children.

And who has been among the prime contributors?

All the children, authorities, and staff of the schools we approached, and also the many individuals who came forward to help simply because they found my intentions honest. But I can’t thank Safexpress (one of the biggest Logistics Company of India) and their Coordinator, Ms. Abha Bhatnagar, enough. Had it not been for their constant Logistics support, neither the first box of books would have reached Naddi, nor could we have afforded to continue doing so.

Ah, okay! You also work with homeless people, what are the common problems you find them facing?

Their main problem and struggle centres around the lack of access to basic necessities. On surveying, we found out that even water they have to buy. And having no money to do that, they wear the same clothes for 10-12 days and then throw them.

Our team of volunteers tapped some of these areas and contacted The Jal Board of Delhi to look into the matter. For good six months, no action was taken, but there was no day when our volunteers would not go to their office, so eventually they had to address the issue, and allotted a supply of 9000 liters of water to the areas.

Brilliant. Tell us about the recent Diwali celebrations at Lakshyam?

So we ran a 7-day campaign on our Facebook Page, through which we asked people to visit our Lakshyam Centres and organized distribution of sweets and snacks for children. It was a huge success! We also collected toys and clothes, and gave gifts to all the children. And alongside conducted workshops on ‘Say No To Crackers.’

And lastly, how can people join you as volunteers?

We have 100-200 volunteers working with us at a time, and they come from various colleges and institutes. Also, corporate companies collaborate with us as a part of their social initiatives, and even Bollywood stars. Anyone is welcome to join us in any capacity they can! You could either get in touch through our Facebook Page or contact us on the numbers available on our Website.

This article was first published on December 28, 2017.