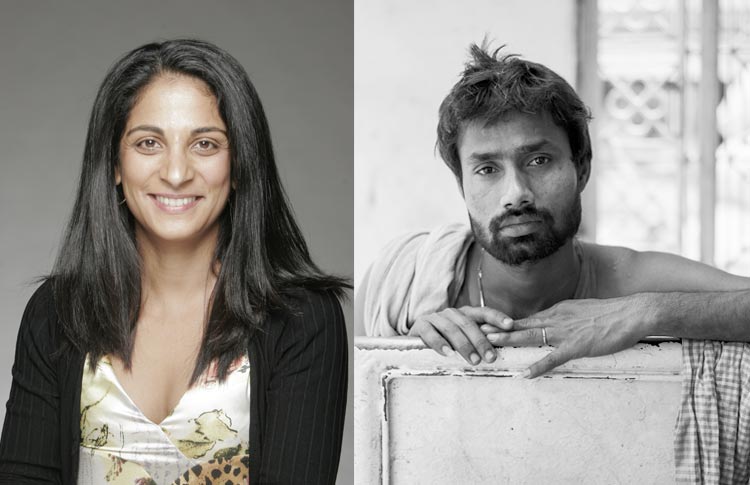 On a sweltering Sunday in June a few years ago, Sarah K Khan was invited to a simple Rajasthani breakfast of masoor dal, fresh-made chapatis and a mound of hot rice covered in powdered jaggery. The little feast had been made by a young man who works as a spice porter on weekdays at Gadodia Market, Asia’s largest spice market located in Khari Baoli in Old Delhi, and along with other spice porters who live and work in Gadodia Market, spends his weeks carrying heavy loads for spice-trading companies.

A Pakistani-American researcher exploring food, culture, migration and sustainability, Sarah has been photographing the market since her first visit to India in 2001, and documenting the lives of the porters in portraits has been a long-term project for her. Most tourists would come, walk around, look at the views, and take photos from a distance of the men labouring. But Sarah was no ordinary tourist, she kept showing up and gradually the porters became more open to her. And one day a porter said to her, “if you want to spend time come on a Sunday, when we rest. It is easier to interact.”

Sarah’s father’s family lived in Old Delhi, and the stories she heard growing up was one of her major draws to the city. “The source of flavour and taste, this center of spices in Delhi motivated me as did knowing that my father and his family walked these same streets before Partition,” said Khan in an interview with Scroll.

Though photographing the market for almost 17 years now, it was in 2014-15 that she really got to know some of the porters. “A large majority of them come from farming background,” she said. “These men become the designated family member to travel to the city to bring in some cash while the rest stay behind and tend to their farms. The reasons for migrations are many and Old Delhi and Khari Baoli overflow with much migrant diversity. I wanted to highlight that most migrants anywhere work hard to make a living with dignity, and I wanted to capture them as individuals with vibrant personalities.”

Back in Old Delhi, documenting the lives of the spice porters, returning photos, and privileged to take more. Morning scene before the mad mad rush. Those with the least always give the most.

15 Likes, 2 Comments – Sarah K Khan (@sarahkkhan) on Instagram: “Back in Old Delhi, documenting the lives of the spice porters, returning photos, and privileged to…”

The images that she captured in this Delhi market, alongside the ones taken during her research meeting and speaking with many women farmers, found their way into a solo exhibition titled In/Visible: Portraits of Farmers and Spice Porters of India at New York University’s Kimmel Windows Gallery.

The exhibit will be up 24/7, all summer. “In/Visible: Portraits of Farmers and Spice Porters, India” Photography Exhibition by @sarahkkhan to Debut at NYU’s Kimmel Windows Galleries, Jun 7 – Sep 7, 2018 https://t.co/yPIAFyyLJV

None of the images show the men toiling or as beasts of burden. Instead the portraits reveal them striking a pose in their best. “For many of them it was their quiet time. They would be hennaing their hair, shaving, cooking. A lot of them were resting or talking on the phone to their families. Many would see my camera and request me to take their photographs. I photographed them as they preferred, as they wanted to be seen.”

“There was one young porter, who called me ‘didi’, who was so eager to be photographed that he planned the location, background and his serious gaze back at the camera. He struck different poses, and angles, fussed with his collar and took it very seriously. He would then take me to other porters, to their shops and godowns where they rested. The younger porters spent time getting ready, while other porters did not want to talk about where they were from, or their backgrounds. Instead they wanted me to take several photos of them in different poses with their friends close by,” she further recollected.

But also in the exhibition are portraits of women whom Sarah met while researching and documenting the lives of women farmers as part of the Fulbright Scholar Programme. “There are 95 million women farmers in India. Their informal labour and their extraordinary contributions are undervalued. They are encyclopedias of information and ecological knowledge about a specific place. The women I engaged with are seed savers, growers of crops, foragers, hunters and food processors, and culinary experts. I worked with Mirasi caste singers in Rajasthan, Siddi women farmers in Karnataka, women rice farmers in Nagaland, Adivasis in Telangana, millet processors in Andhra, and women street vendors in Delhi. All of them struck a chord with me.”

Another day with these beauties. The Mirasi caste singers, poets, storytellers and main carriers of every conceivable type of cultural knowledge. Making invisible lives visible in partnership with those who have been doing it for decades! @thedesertmuseumjodhpur

18 Likes, 3 Comments – Sarah K Khan (@sarahkkhan) on Instagram: “Another day with these beauties. The Mirasi caste singers, poets, storytellers and main carriers of…”

Just as her other projects, the central theme for this project, too, remains the strength of these women outside of their work as farmers and as resilient working individuals.