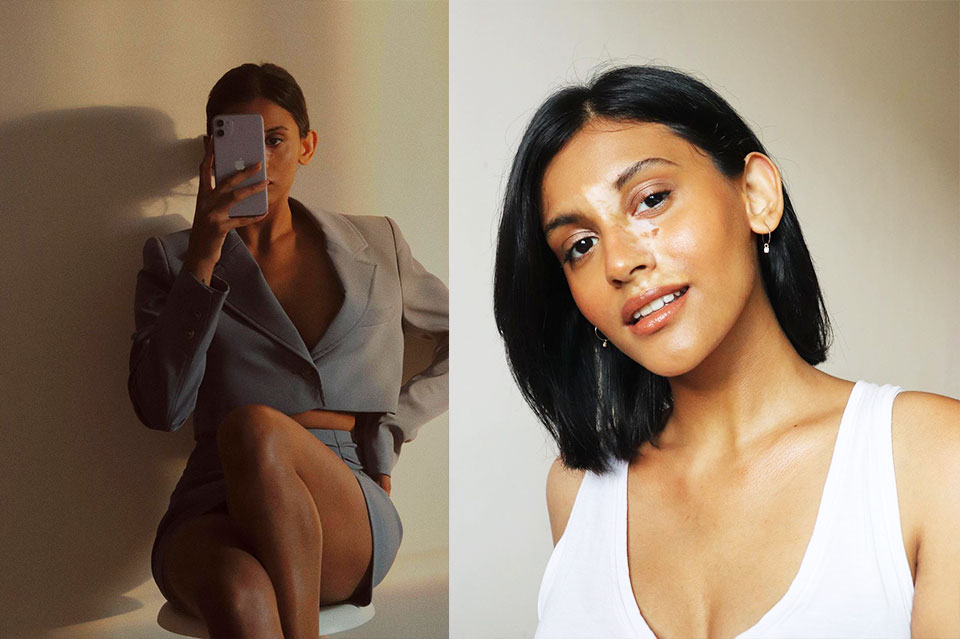 How does a beautiful face look? Is it defined by structure, complexion, or tone? Or is it in the openness of the smile and the confidence in the eyes? With each passing day, the understanding of true beauty is evolving. And this has been made possible by every new face that defies and refuses to fit itself in rigid checkboxes.

Prarthana Jagan is a model who has posed for Elle Magazine, Grazia and also featured on the cover of the Cosmos. She has vitiligo.

Vitiligo is a skin condition where white pale patches start developing and can affect any part of the skin. Prarthana was 11 years old when she first saw a pale white spot on her forehead. Prarthana was misdiagnosed by doctors since vitiligo wasn’t a common disease back then. Because of the lack of proper medication, her vitiligo started spreading until the dermatologist told her one day to try concealer and makeup. “I went on to wear make-up until I was nearly 19. I was in front of my mirror for 30 minutes every single day wearing make-up. I would be asked questions in school and made fun of, too. I got bullied; people would call me names, like orange face and so on. Yes it was daunting for me to have something like this as a kid,” reminisces Prarthana.

Prarthana’s early days throw light on the lack of sensitivity that runs through society, at large. In schools, kids are bullied and there is no shortage of advice by ‘well meaning’ people around. It is hard to imagine a young girl going through the trauma of having to put on make-up, a luxury that not many knew or understood then.

Today Prarthana is spreading awareness on vitiligo. Through modeling, content creating, and social handles, she has shown the world that beauty is owned not handed over by societal standards. She doesn’t use make-up to hide but instead takes pride in her real awesomeness. As she says, “You are worth more than your skin and you are you! That is your superpower.”

What changed the course of events for Prarthana? How did she manage to let go of her insecurities and see her true beauty?

In conversation with Prarthana as she unfolds her inspiring journey,

What advice would you like to give those who have vitiligo and how would you suggest family and friends stand in support?

Prarthana: I would say stop giving them unsolicited advice. There is not much we don’t know about ourselves. We know there is surgery or treatments that exist. Some doctors claim that there are 100% results, some people have been cured and I am very happy for them. But don’t be disheartened if you are not. I learnt that when I started accepting my skin I started seeing my brown pigments come into my vitiligo. It was like my skin itself became so happy that it started healing itself and I didn’t have to do anything for it to happen. So the first step is acceptance and power from within that says this is normal. It’s you, it’s a part of you, it’s not isolating you but it’s making you different. Accept your skin and tell yourself that this is my skin and I am going to embody and embrace it. That’s the first step and it helped me not to wear make-up anymore. For friends and family, I would say just listening to them when they want to vent. Don’t give solutions, but just listen. And be there, no matter what. If they want or don’t want to wear make-up or if they want to get a treatment or not, it’s on them. It is their choice.

At 18, there came a turning point. Can you tell us more about what led you to love yourself?

Prarthana: I had to get operated on for another medical reason and it was supposed to be a two-day procedure. So I went to the OT without make-up but there were so many complications in the surgery that I ended up staying there for 10 days. I was without make-up for 10 days which was so out of the normal for me because I had not gone wearing makeup for a single day. And I suddenly understood I was being treated very normally. People didn’t look at me weirdly. The first time I went out without make-up, it was really liberating. Feeling the sun on my face was really freeing in a way and it was a humbling experience. That’s where everything changed – and I started my YouTube channel then in 2016.

How did modeling happen? What are the stereotypes you think you are shattering by becoming a successful model?

Prarthana: When I was a kid I would look at magazines and the actresses, such as PC or Kareena Kapoor, I wanted to be featured in a magazine; it was a dream. But because I had vitiligo I thought that this dream wouldn’t come true. It was always at the back of my mind that I had vitiligo and I couldn’t be someone famous because models are all supposed to be fair, tall, and look perfect. I never thought that I could ever become one. But when I started the Youtube channel, I met a friend who was a photographer and he asked me to try and do a shoot. And when we tried, it came out really well so we started doing it as a hobby. Wherever my friend took a picture with me he would tag me and it started getting a lot of traction. That’s how people from Elle and Grazia found me. I then went for the Prasad Bidapa Model Hunting 2018 – and that’s how I got pushed into the modeling sphere. On the cover of any magazine, I feel that I am representing a class of people. When I was a kid nobody was there, but I am glad that I can do that for somebody else. Maybe, encourage someone out there to go out without make-up!

Women are often judged more when it comes to reaching set beauty standards. What are your thoughts on that? Do you think having vitiligo as a woman is more challenging?

Prarthana: Modeling is a woman-driven industry. I am not really a conventional model. I don’t look the same as anybody else as I am not exceptionally skinny or tall like all models are supposed to be. I think I am more shamed for my body than having vitiligo! But thankfully, there are a lot of magazines and platforms that are looking to showcase diverse models. They want to keep things natural and such things are very encouraging for people like me. I have worked with a lot of them and I am glad I can bring about a certain change in the industry.

What are your future plans?

Prarthana: Right now, I have four jobs! I am doing my PG in Digital Marketing, I am also working as a content creator for my own page, I am a marketing and content strategist for a cosmetic company and I also work as a model. Things have happened naturally without me having to plan. So I never plan because I think life has its own way of making things happen. I am just working and whatever opportunities I get, I am lucky to grab it and make something out of it.