Liberals Are On The Run Literally For Their Lives, How Can They Be Stifling Debate: Sagarika Ghose 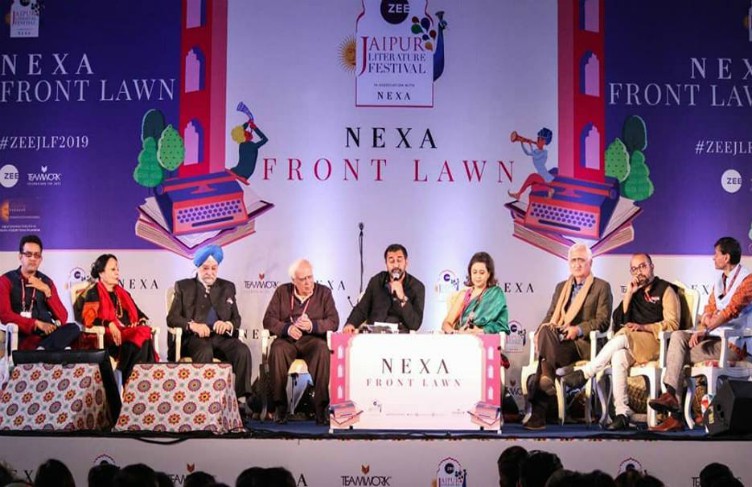 Liberalism seems to be stuck in a paradox in India today where the liberals (or let’s say those who identify as liberals) have to constantly prove their stance while avoiding to tread on the lines which sometimes end the premises of their very claims. But why does this happen?

In the current environment of the country, where extremism and intolerance come in complementary with politics, it becomes rather important to understand what it means to be a liberal in modern day India. It also becomes important to understand what it means to claim that you are a liberal. But who is a liberal and who is illiberal? Where do the lines get blurred?

Sreenivasan Jain moderated the debate and explained the premises of the same as he said, “As liberal consensus is on the retreat, whether it is America or Turkey or in India, we have gathered here to eviscerate who else but liberals, that annoyingly resilient species that on the one hand, we are told, is increasingly irrelevant but on the other hand, is somehow managing to stifle debate.”

Makarand Paranjape opened the debate with the following line of thought, “No, ordinarily liberals do not stifle debate but illiberals or bigots do. Unfortunately, most liberals among us today are illiberals which is why we are going through the crisis.”

He also highlighted the problem with the entire discourse that time and again puts the entire idea of liberalism up for scrutiny. He asked, “Which among ourselves tags him or her as illiberal or a bigot and yet we will not hesitate in the course of this debate to brand each other an enemies of liberalism?”

Makarand then added, “The debate is misphrased because it ignores the elephant in the room, the alienation and incompetence of the elites whom we even term casually malign if not brutally indifferent.”

Sagarika Ghose, whose book Why I am A liberal inspired the entire debate, opened up with an exasperated question, “Do liberals stifle debate. Are we serious about this question?”

She went on to explain her problem with the basic grounds of the question, “Liberal journalist Gauri Lankesh has been shot dead. Liberal writer Naintara Sehgal is not allowed to speak any more in a Maharashtrian lit fest, liberal rationalist Govind Pansare, Narendra Dabholkar, MM Kaalburgi have been shot dead, liberal journalists are being sacked for their jobs, liberal activists are being jailed, liberal scholar Anand Teltumbde who is writing on Dalit Bahujan rights is threatened with arrest, liberal left students Kanhaiya Kumar and Omar Khalid are been threatened with sedition, and we are saying liberals are stifling debate. Is it a republic TV-isation of our public discourse?”

Sagarika, however, made it a point to bring out the loophole in the entire narrative as she went on to talk about illiberal liberalism. She explained, “Liberals to some extent have been guilty of intolerance because we know that liberalism and liberals arose from the struggles against the tyrannical state against tyrannical brute state power, and I believe over time liberals turned their back on their birth as opposers of state power and sought to leverage the power of the state. So we actually had the birth of the illiberal liberalism.”

Hardeep Puri in his passionate aggressive rant went on questioning the very premises of liberal ideologies as he said, “Those who are branded as liberals today are at the very least slightly confused lot. Who precisely is a liberal in India? The liberal who manipulated the system, who was a beneficiary of the state patronage including in India missed out on the one fundamental thing that there is inequality there is angst.”

He further went on dismantling the very idea of liberals and liberalism in the country. He said, “Indian National Congress was an elite idea, then Mahatma Gandhi came along and he produced mass contact and that gave India our nationalism. So the liberal is quite happy hurling abuse and invective against the state. Never has been a state as roundly abused as it is being today and yet we call it liberalism.”

He concluded by saying, “You are ashamed of your Indianness so today you turn around and you talk about all those guys who are being hounded but hounded by whom? Hounded by your Naxalite goons, your country cousins who are commoners and you want to question the state. Liberal, you seriously need some anguished introspection.”

Kapil Sibbal began on a calmer note as he addressed the most basic of the questions pertaining to the entire debate. “Who is a liberal?”

However, he quickly did a 180 and he went on giving a caustic reply to Puri, “Quite frankly none of us sitting here can say that he/she is not a liberal because we owe allegiance to a constitution which is illiberal. Freedom of speech is part of liberalism. Mr. Puri can’t oppose it, his state might oppose it, his prime minister might oppose it but he cannot oppose it.”

He added, “Liberalism is a way of life, the only way the world can survive. When the state stops listening, the problem is not with the liberalism, it is with the mindset of the state which wants to foist its ideas to the individuals in the country.”

The debate ended with a vote from the audience. One would expect an outcome from such impassioned discourse, right? However, the audience was divided in half and half, perhaps as confused about taking sides as it was at the beginning of the debate, something that interestingly very clearly explains the awkward status of liberalism in the country a part of which always slips off from one’s hand no matter how hard you try to hold it.

How about we let go of the hold? How about let us all be liberals who don’t stifle debate?