Journalist Anupama Chandrasekaran On Why Archaeological Stories Are Important 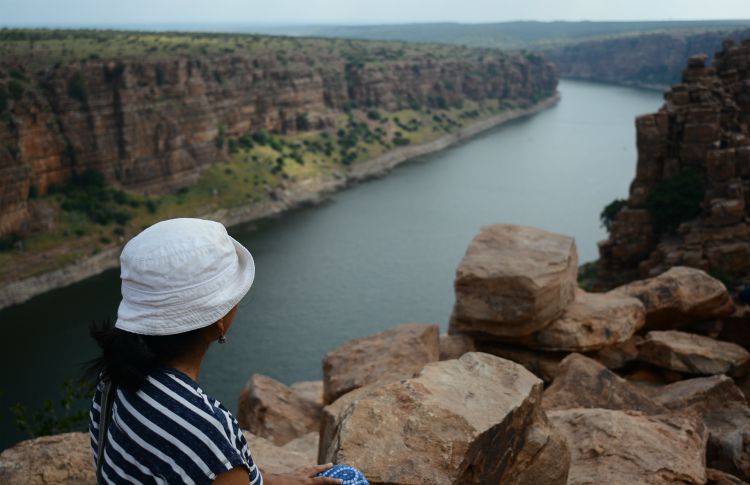 History is a subject majority of the students just bear through in school. It’s considered one of the most boring things ever and not a lot of focus is given to it in school. But journalist Anupama Chandrasekaran believes that these stories are important and need to be told, and through her podcast, titled ‘Desi Stones and Bones’, she aims to do just that.

Anupama used to be a business journalist and write articles on finance. “As a journalist, I was looking for people with stories and that was one of the reasons I chose to move out of financial journalism. I was tired of people telling me about their profits and losses and marketing strategies and things like that. It was becoming boring,” she explained. Her interest in archaeology primarily developed because of this book she’d read called ‘Indica: A Deep Natural History of the Indian Subcontinent’ by Pranay Lal. She couldn’t put down the book and that was her initiation into the world of archaeology.

“There are a lot of stories to be told. As I started speaking to these professionals, I didn’t have a problem listing out story ideas. When I used to be in business journalism I used to struggle, I wasn’t good at it and couldn’t find stories, I would take time to finish them but here the situation is completely opposite. Suddenly here I had lots of stories, and listening to people who wanted to tell their stories seemed like a boon to me,” she adds.

She chose podcast as the medium to tell her stories because her father was fascinated by audio and most discussions revolved around what speaker systems or turntables to buy. Her father’s love for audio rubbed off on her and together they used to record random sounds and conversations on empty cassettes. Anupama says, “It was fun to listen to those voices, you know there are some things that stay with you when you grow up and this was one indelible impression or memory that I have of my childhood, the recording and sitting around with my dad later, listening to our childish voices and wincing at how horrible we sounded. So my interest in audio has always been there.”

Behind each of her episodes go in countless hours of effort that Anupama puts in all by herself while being a stay-at-home mother. Every episode takes at least up to a month to produce because she works while her children are at school and has adjusted her work schedule to theirs. Apart from spending time with her kids, there are a lot of steps that go into the final product and each of them is a time consuming one because she works alone and wasn’t previously trained in recording and editing audio.

The entire process starts, usually, with a phone conversation with a professional. Giving the example of one of her episodes, Anupama shares the complete process in detail. “I did a story about a person called Vishal Verma who lives in a place called Manawar in Madhya Pradesh. I read about him in an article written by a well-known journalist Sanjay Kumar, where he’d spoken about the issues palaeontologists deal with in India like destroyed sites. I had a telephonic interview with Vishal who then offered to take me to a dinosaur nesting site,” she expands. “After our conversation, I went to Manawar and spent two nights there. The site was at a place called Bagh, and Manawar is the town closest to it.”

Once at the site, Anupama then moves on to the next step, i.e. recording. She says, “I’m someone that really likes listening to ambient sounds like birds chirping, sounds of the trains etc. I have a small recorder that can record those sounds so that I can give a sense of the space while telling the story. I also have very good equipment for recording on field that filters out the background noises so I have conversations with the professionals on the field itself.”

The next step of the process, she says, is to click photographs of the site. Since this project is self-funded, Anupama is the one who does the photography as well. She also hand draws illustrations for each of her episodes because she personally is more inclined towards journalistic work that has illustrations and data visualization.

The final step in the process before uploading the finished episode on her website is editing. “When I record something it’s like a piece of cloth from which I have to cut out things, pick up the quotes I want and then insert my commentary into it, sort of like stitching my voice into it. Then I add music and the ambient sounds to it as well. This podcast is a personal project for me and I want to do it in a way that hasn’t been done before.”

Hearing these incredible stories from the professionals themselves is an absolutely surreal experience for her and those moments of being on site, talking to the professionals and being surrounded by the bones and teeth take her back in time and she says they are precious and unforgettable. Despite having visited or heard about many of these places before, she wasn’t aware of their archaeological significance and says, “It’s almost like another layer of seeing a place has been revealed. It makes you realize there are so many things you’re not seeing and noticing, things that existed not just hundreds of years ago, not even thousands of years ago, but millions of years ago. I’ve not been able to wrap my head around this idea that people have existed, that things have existed here before. It just does something to you.”

Talking about women in the field of archaeology, Anupama says that the women she’s worked with are extremely brave, charged with the prospect of finding something new. Well, actually, finding something old. They don’t consider themselves as ‘women archaeologists’ working in the field, they are just archaeologists doing their job and extremely well at that. Many of these sites have insects and reptiles burrowed in the soil and these women somehow just know when there might be danger.

But as with all occupations, this one also has its fair share of discriminating people that do not recognize and value the talent of these incredible women. She adds on, “This mentality does exist that expeditions can only be led by men and some of them find it difficult to take orders from women.”

Anupama has three more podcasts lined up in this series about a burial site in Chennai, an extremely rare fossil that shows a reptile in the act of devouring the eggs of another reptile and one about a site recently discovered in Andhra Pradesh that has many intriguing drawings.