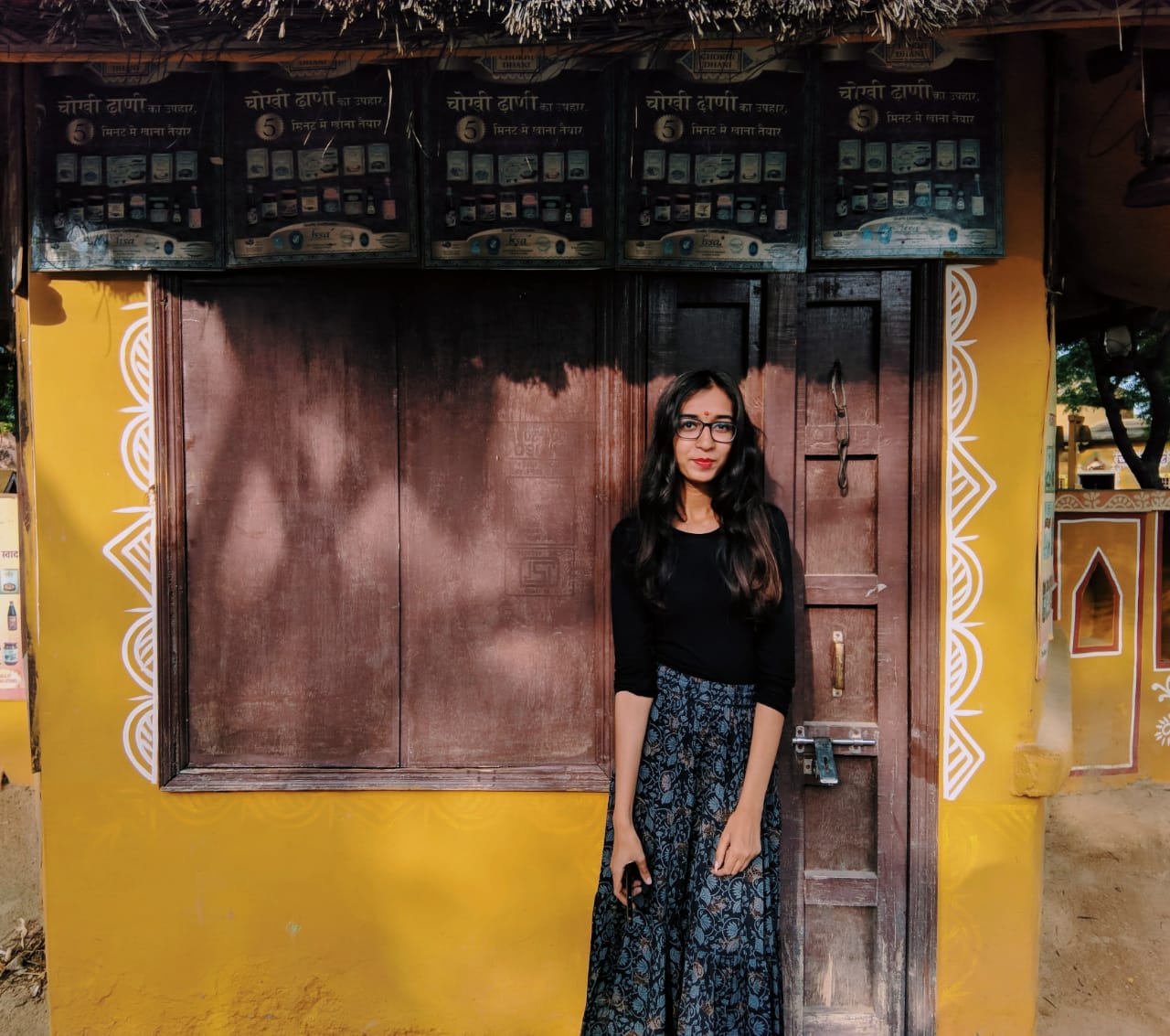 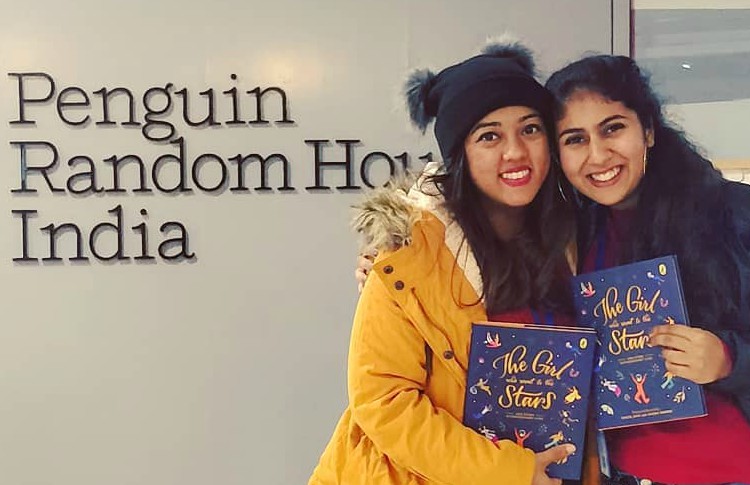 In our society, girls are often showered with unsolicited advice like, “don’t play with boys”, “change these revealing clothes”, “you’re a girl, stop dreaming big”, “stop looking for jobs, you’re going to get married anyway” and so on. Well, somewhere, somehow, we accepted it. Right?

Thankfully, the archives of Indian history are filled with women who unabashedly disapproved of such advice. They fought against these ideologies, thoughts and the society.

Now we stand at the cusp of a transition from the patriarchal system that suppresses women. Catalyzing this effect, Ishita Jain and Naomi Kundu’s book, The Girl Who Went to The Stars, honours exemplary women of India who shattered misogyny.

The book includes inspiring stories of 50 Indian women filled with grit, guts, glory, and self-discovery. The bright and colorful illustrations are a cherry on top of their stimulating words.

In a recent interview with IWB, Ishita and Naomi spoke about their book, their childhood, and the role of bedtime stories in empowering young girls.

Your book The Girl Who Went to The Stars covers struggles of 50 incredible Indian women. What do you hope little girls will learn from this book?

We hope that people of all genders (and ages) read this book! This book is fundamentally about equality. We want to emphasize that while there are both men and women who are doing amazing things in our country, historically it has always been harder for women to do things that are considered normal for a man.

Education, self-expression, choice, free will – these are things that weren’t always available to women. There will be a day when we don’t have to talk exclusively about women’s stories, but we are still working hard to see that day.

Was there a particular moment you can pinpoint that was crucial to the development of your perspective on feminism?

It wasn’t a particular moment in time, but rather the collective experience of growing up as a woman in India. The moment we hit puberty, it was very clear that we were looked at and perceived differently. All of a sudden, it somehow became the norm to change our own behavior to ‘keep ourselves safe.’ Garment choices were not governed by mood or the weather but by the mode of transport taken, the time of day or the locality that is visited. It is absolutely ridiculous when people and governments have rigid opinions about how a woman should behave.

Feminism is about equality. It is about being able to strive for an environment that can support your existence and not the other way around.

What were the theoretical and cultural ideas you explored to write a book about 50 incredible Indian women?

There were many instances where we had to explore difficult subject matter, and we were clear from the start that we did not want to censor our content because we are writing for children. We strongly believe that most ‘sensitive’ things shouldn’t have an age barrier, but should be discussed or framed age appropriately. We touched upon politics with Indira Gandhi, gender identity with Rose Venkatesan and sexism with Harshini Kanhekar, Surekha Yadav and Mary Kom to name a few. We consciously tried to cover most issues associated with equality, Indian history, socio-economic disparity, and free-will, addressing it in a more conversational way rather than using textbook definitions.

We also wanted to ensure we covered a wide gamut of professions – from an astronaut to a train driver. Every job had its own struggle when it came to being a woman. We wanted to cover a lot of stories that we thought were fantastic but just hadn’t had a chance to be heard as much.

Your book includes Indian women who crossed hurdles, followed their dreams and had passion and courage. Who are those women in your life who motivated you throughout your journey?

Ishita:  Definitely, the women who raised us and taught us! I was raised in a joint family and given a lot of time by every single member. My mother, both my aunts and my grandmother have taught me about resilience and balancing life. Growing up, I was and still am extremely close to my Taiji. From making up fictional characters and stories to showing me the rich history of Delhi, my aunt really taught me how to look for beauty in every single thing that surrounds me. I was never treated as a ‘kid’ but always as an individual and it is a privilege to have grown up with her.

Naomi: In contrast, I grew up in a nuclear family, my brother and I look to our parents as our sole examples of what it meant to be an adult. My mother managed most aspects about my life; from keeping me fed, dressing me up, driving me to the bus stop to soothing my injuries both physical and emotional. She establishes the basic framework through which my life functioned.

As a young adult today, navigating my own responsibilities, finances, and even transportation, I find that motherhood is the most incredibly demanding and diverse job there is. From being a manager, therapist, cook, educator, stylist, advocator – the list is endless. My mother and the concept of motherhood has been one of the driving forces behind my outlook on feminism, and what it means for a woman to have equal opportunity and recognition. If we are allowed to function freely and live fulfilling lives, women have the ability to effect serious change in how we work together as a race.

As a writer, how do you think one can address the gender wage gap existing in the writing industry in India?

As writers merely having scratched the surface of what is a large and complex industry, we can perhaps understand this issue by reflecting on our childhoods. Stories as a kid were purely about the plot, a character, the lesson or the adventure, paying little to no heed to the author or the gender they were.

It’s no surprise that many female authors we are now familiar with have used male pseudonyms to create some of their initial work. People should be compensated on the quality of work they produce and not their gender, caste or religion, and it should be part of company policies to ensure that. Wage tends to be a touchy subject because people don’t talk about it openly. It’s considered rude to talk numbers or discuss salaries and rates. Having an open attitude towards talking about money can help in bringing transparency, at the very least.

Discuss the role of the bedtime stories to challenge patriarchal ideologies?

Traditional bedtime stories have always maintained some fundamental themes; courage, friendship, belonging, family, right from wrong and so on. Further, fairytales have been the most common way to appeal to the youngest of the lot with imaginary creatures and surreal circumstances. While fantasy and fiction work its own magic, children also need exposure to real life, relatable examples. If stories are still an important means through which children get a sense of the outside world, the fairytale climate so far feeds heavily into portraying helpless female characters being rescued by strong, smart and self-assured male leads.

It’s important to challenge that notion at as early an age as possible. Bedtime stories, films, and cartoons that are centered around strong female figures are important now more than ever – to raise our kids with even the slightest more sense of human equality than before.

What do you think are some ways in which we can encourage young girls to be confident and reach their full potential?

In a world where we are bombarded by social media heavily dominated by visual standards of what is valuable, it is easy to fall prey to societal norms and standards of beauty. We think that it is really important to educate both young girls and boys about beauty, sexuality, intelligence, and self-worth right from a young age. Gender, sex-education, reproduction, menstruation and body image aren’t supposed to be explained in two pages of a textbook. It needs thought, design, and exposure through meaningful dialogue over the course of growing up.

Having an emotional and biological understanding of one’s body can be really empowering for a young person. Let us unlearn what we have been unflinchingly accepting as the norm at the cost of one half of the population, and reformat it to an even playing field! If young women can access their full potential, the world could look completely different.