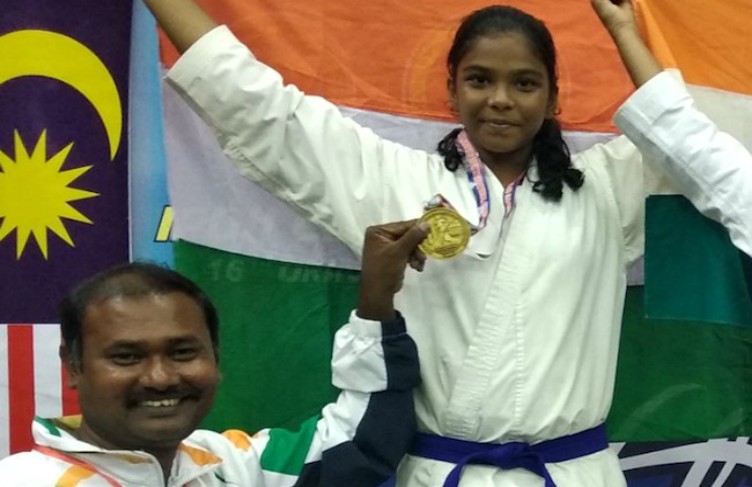 Fascinated by martial arts after watching the film Karate Kid on TV, Ilakkia started her training three years ago. But what makes Ilakkia’s story stand out is the efforts of her father who made sure his daughter realised her dreams. “I remember watching the film and being very inspired. Coincidentally, my master was distributing forms to all those who were interested to join his classes in my school. I took it up along with a few friends,” shared Ilakkia, who was in class 5 when she joined the karate classes, that were being held in her school. “I asked my father if I could, and he immediately agreed.”

Illakia’s father made sure that she participated in all the competitions, even if it meant that he had to borrow money, so as to provide her proper training under her coach Moo Srinivasan. However, her father takes no credit for her win. “It was all her. I’ve always provided everything that my children have asked for, even if I had to face difficulties. She is my first born and after her I had two sons. When she wanted to learn Bharatanatyam and Carnatic music, I supported her. She learnt Bharatanatyam for a year and Carnatic music for 6 months. Her wish to learn Karate too was similar to me. It is her life and whatever she wants to be, she can be sure of my support,” shared Muruganandham Ilakkia’s father. “I treat both my sons and daughter the same. My oldest son is learning football and I’ve never told them a no.”

Ilakkiya’s feat would not have been possible if not for her father, and her heartwarming story makes us realise that things are changing for good, one step at a time. “I dreamt that one day my daughter would make me proud by becoming a doctor or a lawyer, but today she has brought fame to me and my entire village. I had not even dreamed of this,” he added.