Athletic Prodigy, 9 YO Pooja Bishnoi Talks To Us About Her Big Dream, Gold Olympic Medal 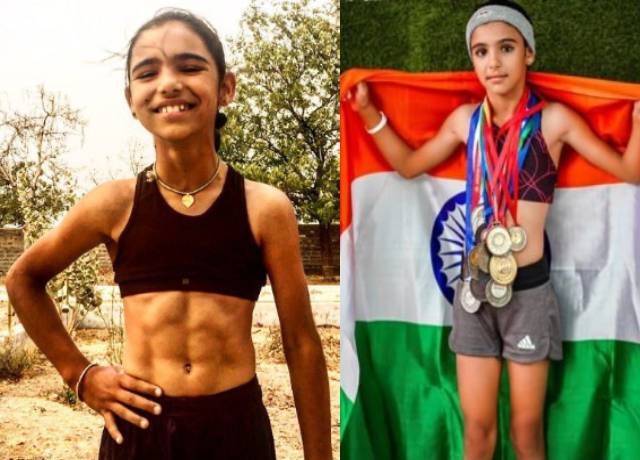 Pooja Bishnoi, a young nine-year-old girl, is a sporting celebrity in her own right. But she didn’t become one overnight. Her story is both fascinating and inspiring as she continues to charter her own path, determined to achieve the final culmination of all her efforts – an Olympic medal for her country.

Hailing from a small village in Jodhpur, Rajasthan, Pooja started her athletic journey by chance.  Her uncle, Sarwan Budiya, who is also her coach, asked her to race with a group of boys who were playing outside her home when she was just three. Pooja lost the race, but Sarwan found in her an ability that he knew he could nurture further. And so he told the group of boys to meet them for another race after a month.

Under the tutelage of her coach, Pooja was able to not only defeat the boys in a race the next month but also, was able to break a string of records. Some of these include covering three kms in 12.50 minutes (a U10 world record), covering 10 km in only 48 minutes, and becoming the first youngest girl in the world to build six-pack abs.

When one watches her workout videos, her tireless efforts are on display. It is probably because of this and her numerous achievements at such a young age, that the Virat Kohli Foundation decided to support her. Today, Pooja along with the strong support of her coach and backing of the Foundation is single-mindedly focused on bringing a gold medal home in the Olympics.

But after all, isn’t she just a kid? A child who is juggling her school, sports, training, and fitness? Does that affect her? Does it in any way take away the innocence of childhood? To this, her coach Sarwan replies, “We always say that khelte hue bachche ache lagte hain. (We all like to see children play). But if they play for the country with passion, wouldn’t that be so much better? If they get to know their goals when they are young, during their childhood rather than after 20 years of age. They can be better equipped to build a stronger path for themselves.”

And perhaps that sums up Pooja’s tremendous journey so far. Her focus is absolutely undeterred for she is fascinated by the gold medal and wants to make her country proud. It might seem a little surprising to hear a little girl say, “Mera desh ka naam roshan karna chhati hu,” but then everything about Pooja is both surprising and inspiring. In fact, the schedule of an ordinary day in Pooja’s life is no match for any other nine-year-old.

With her uncle and coach Sarwan Budia

The innocence of childhood

Pooja rants off her routine saying, “I get up at three in the morning and train till eight. Then I study, attend school till two. I rest for an hour and then from four to eight o’clock I practice again.” Doesn’t she miss sometimes just hanging out or eating junk food or chocolates? She promptly replies, “Mera mann nahi karta (No I don’t feel like eating anything besides my diet food).” In fact, she says she tells everyone to give her only her diet meal and nothing else.

Let me just detour a bit here and tell you I have a son who is almost Pooja’s age. And I can tell you to make children follow a routine every single day takes a lot of resolve and interest. Moreover, to keep them off the deemed childhood paraphilia, such as cakes, chocolates, and chips consistently is no mean task either. But Pooja’s maturity leaves no scope for childish extravagances. In her playfulness, she has learned to master the art of an almost mechanical state of being, striding on her willpower and a strong support team.

But that doesn’t mean that the child in her has been shunted out. It peeks out in her love for cricket and in the fact that she also wants to play for the Indian Cricket Team as a fast bowler. Yes, her focus is on athletics and running, but she enjoys playing football and doing gymnastics. And about the six-pack abs, she had really no intention of getting them. She just trained and did her core exercises as instructed.

And now she has a physique that people double her age would do anything to have. Not that they don’t know what to do but very few actually end up doing it! And hence Pooja is a child in every sense of the word – untouched by the need to do things for the approval of others and unadulterated by the skepticism that usually comes with age. Under the noise of, quite literally, her body of work lays a deeper sense of innocence. She wants to work hard, run hard and win a medal for the country. That’s all.

However, preparing for a world event, let alone training to become a serious professional athlete is not child’s play. To assist her at every step of the way has been her coach, uncle, and mentor Sarwan Budiya. An aspiring athlete himself, he had to give up on competing because of an injury. However, in Pooja he sees a future that reminds him of his own dreams.

But what were the challenges he faced and what are some of the things that he would like to change in Indian sports?

He points out that a talent such as Pooja’s would instantly be recognized in other countries. However, in India, people are a little ignorant and wary of other sports besides cricket. And hence he frequently uploads and updates Pooja’s social media handles to bring limelight to her achievements and dedication. He hopes that the sporting community remains strong and most importantly that they and the country start focusing on its children, the younger generation.

“If the foundation is strong, only then can large pillars be built on it,” says Sarwan, who strongly believes that children should be encouraged in all kinds of sports.

Yet, how hard was his journey in trying to train Pooja and get her the recognition she deserved? He admits that the first stage of the journey was difficult. There were many challenges, financial being one of them. But he goes on to say, “If we sit idle and wait for help no one will support us. So the first few steps one has to walk alone until they reach a stage and caliber where people find them worthy enough to lend support.” And this is exactly what happened. The Virat Kohli Foundation handpicked Pooja to give her a platform and exposure to high sporting and training standards. The management along with her coach have chalked out her routine and provided her with expert physiotherapists, nutritionists, dieticians, etc. She now has a dedicated team that is helping and preparing her for her lifelong goal of winning a medal at the Olympics.

Pooja is only nine years old and she has a long way to go. But she is on the right track and we wish her luck of being able to achieve all her dreams. However, her story is inspiring, not only because of her skill and hard work. It is also inspiring because it opens up a whole range of possibilities for children of her age and those younger. It makes them believe in themselves and in the world at large, knowing that dedication, hard work, and working towards your dream always pay off. As Sarwan says, and I couldn’t agree more, “We don’t know how a little thought in the little minds can someday lead to something big!”