Acing Life With Her Self-Confidence, Para Athlete Manasi Joshi On Her Journey To World Championship Pedestal 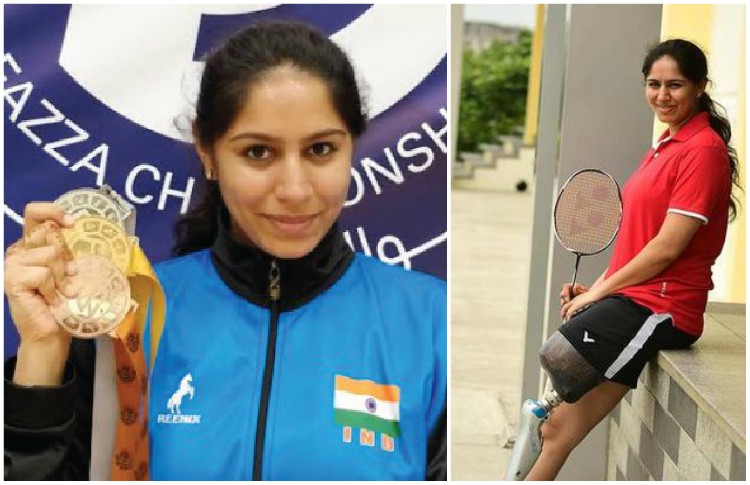 Update: 30-year-old Manasi Joshi was the talk of the town after she clinched her first gold at the BWF Para Badmintonship World Championships. Joshi withstood a tough challenge and beat experienced compatriot and defending champion Parul Parmar 21-12, 21-7 to ensure a top of the podium finish in the women’s singles SL3 category.

“To be honest, I wasn’t expecting to win but I was prepared [for the final]. I just had this one thing in mind that I have to be better than before. I didn’t have a particular strategy against her (Parmar) but it was in my mind that I needed to play better than what I did before. I’d worked extremely hard and I was sure my efforts were going to pay off,” Joshi told Scroll.in.

A career as a software engineer at its peak and the promise of a bright future – Manasi Joshi had it all at the young age of 22, but fate had something else in store for her. The year was 2011 when she met with an accident, which left her with broken arms, numerous other injuries and a crushed left leg. As her condition got complicated, her leg had to be amputated. Despite such a grave loss, nothing could break her steely spirit that just refused to accept defeat.

In 2010, she had competed in an inter-company badminton championship and won the gold. Following the accident, she continued her career as a software engineer and in 2012, three to four months after her recovery, she participated in the same tournament and won gold again. The victory gave her the path to her life’s mission and today she is a world champion badminton player and ranks number 2 in SL3 Singles.

What is her mantra for success, you ask? Well, all Manasi banks on is, “hard work, persistence, learning from best people and self-belief.”

Excerpts from our chat with the gutsy wonder woman:

We at IWB are inspired by how you overcame every hurdle and still managed to retain your positive outlook on life at the same time.

I have a very good support system where everyone along with my family, friends, and colleagues supported me. I took small steps in my recovery right from healing to physiotherapy to rehabilitation.

The accident happened in Dec 2011, so the month of festivities was celebrated there. I celebrated my first anniversary of work with all my colleagues, who had come from Pune and Mumbai to be with me. I celebrated Christmas, New Year right in the hospital. There was not a single moment I was alone in the hospital. It was like a mela in room no. 108. Within a few months, I was back on my new feet and rolling myself in office and in some time I picked up badminton. I recovered from my injury in around 2012, and in 2015 I played my first international tournament

My siblings have been my support system. Even now my sister Nupur Joshi manages my profile and works on my sponsorship, my brother, who is also a badminton player, was my coach initially.

Such an amazing support system you have! But what about the naysayers who live to bring the morale of others down by their negative and demotivating talk?

Well, I tend to ignore unhealthy criticism and focus on my personal development more. I had no plan to break any myth or no plan to prove anyone my capabilities. I knew that if I could get through an accident, I could get through anything in life and that the next step was just learning to adapt. I had learned during my hospitalization how wonderful the human body is, how easily it adapts to a new situation. So If my body could adapt, all I had to do was train my mind that yes, I can do it.

I read about the experiences of different people who had undergone similar situations and thrived. Though initially, I had no plan to play sport at an international level and work for Paralympics. I picked up the sport because my accident had made me a little sedentary and also, it gave me an opportunity to indulge in physical activity. I was just working every day to make my tomorrow better, never knowing that I was changing a whole lot of perceptions and inspiring people.

She has won many medals in the international circuit, with a silver and bronze in World Championship. She recently won Bronze in Asian Games and this year got 7 medals in 4 tournaments with 5 silvers and 2 bronzes.

I really dig your positive energy here. But while overcoming the mental and social barriers is on you, when it comes to funding the para-athletes, our government is not that keen.

The government is doing a great job in funding recognized athletes and supporting them with the best of facilities they can. But when it comes to para-sports and disability in general, there is a long way to go in terms of changing perceptions. But I feel that hard work never goes unrecognized. Even now, only one or two tournaments are funded by the government and we need to play almost 8-10 tournaments a year to maintain ranking.

When I started, I had done fundraisers on Ketto to fund my tournament. Now I have got corporates who fund my training and tournament expenses through CSR. I have been supported by Welspun India and Mallcom India who are currently taking care of my expenditure in sports participation. I am sure that now more and more corporates will start supporting para-athletes through their CSR activity.