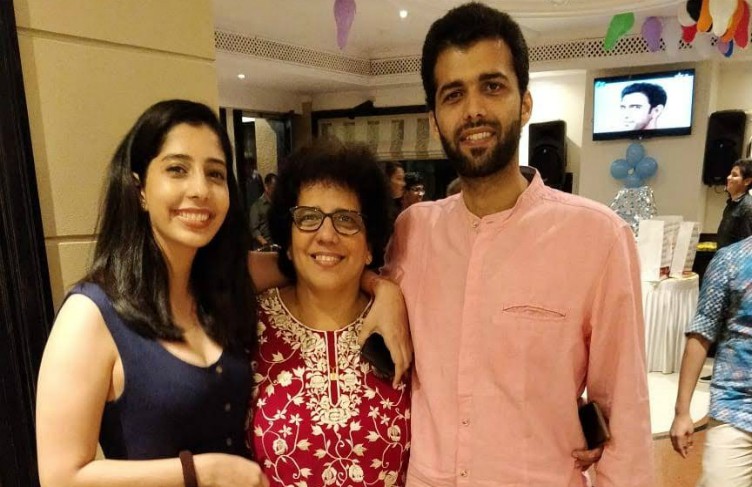 “I keep telling my children, ‘You are my real wealth.’ My husband always makes fun of me at this by saying, ‘Great then you must have the BSES bills and all of that covered’,” says Shernaz Mehernosh Turel, giggling at the idea like a little kid, a Parsi mother who is more of a friend and less of a parent to her children.

It is on a solid camaraderie that the foundation of their relationship is made, a parenting gem that Shernaz has inherited from her late mother. Like she shares, “My mother gave me the kind of space where I could tell her anything. She knew me so well that she could read it from my body language if something was amiss. During those times, she’d often look at me with an all-knowing grin and say, “You are caught one way or the other. So why don’t you tell the truth right away and save yourself from all the stress?”

She adds, “I have brought up my children exactly that way. We don’t hide anything from each other. I share a very friendly rapport with them. If anything happens, good or bad, they can come and confront me. Similarly, if I have some problem, I do the exact same, reach out to my children, share my problems with them and they solve it for me.”

Shernaz hails from a traditional joint family and thus has seen and learned everything being done with perfection in the traditional Parsi way and has made it a point to pass it on to her children as well. “I come from a very culturally rooted family,” she says as she fondly talks of how the smallest of the occasions or festivals are a matter of celebration, which is never taken lightly in the Turel household. “Everything is done as per the proper Parsi rituals. My children respect and cherish all of these small things as much as I do,” she shares.

According to Shernaz, it is the authentic Parsi traditions where one can find the true essence of relationships in the community, especially motherhood. Sharing one such ritual pertaining to typically Parsi birthday celebrations that has been running in their family for generations, she says, “We have a traditional birthday song of ours. We sing it whenever there is a birthday celebration. The song was written by my great-great-grandfather and we have been following and cherishing it till date. My children love that song. Anytime it’s somebody’s birthday in the house, we all get together and sing that song, then we do tikka, give coconut, and garland.”

Despite her regard for her culture and traditions, Shernaz never lets them come between her and her children. Yes, there are times when culture poses certain challenges to her but since she is absolutely clear about her priorities, it never leads to a conflict.

She shares, “If I feel that my children are not comfortable with something, I will forget about it. Everything is not about the rituals. If they are happy and comfortable, I don’t bother about the culture because they are more important to me. After all, at the end of the day, they are the ones who are with me and no one else.”

I state the obvious when I say such an amazing mother ought to have children as amazing as her. Shernaz absolutely seconds the notion and shares with me that there are, in fact, times when her children prove to be way wiser than she is.

She says, “Parents are not always right. Quite often our kids end up being more sensible than us. There are times when they don’t really agree with my ways and are actually right and those are the times that make me realise that I need to change my old ways.”

“But what’s even bigger is the fact that at my age it sometimes gets difficult to change and they understand that as well. There are times when my son retaliates but never my daughter. Daughters are like that, you know, they are the best as my mom used to say,” she adds as her voice goes warm.

There doesn’t exist an emotion or a feeling as strong and unadulterated as a mother’s love. Needless to say, the basic essence of motherhood remains the same all across the world. However, we also believe that every mother is unique in her own way, which comes from an amalgamation of her individual identity as well as her cultural heritage.

Thus, this Mother’s day, IWB has decided to explore the cultural aspects of motherhood so as to ascertain what is it that shapes every mother and sets her apart from the rest. We will thus be introducing you to moms from four different communities and sharing their journeys through motherhood.