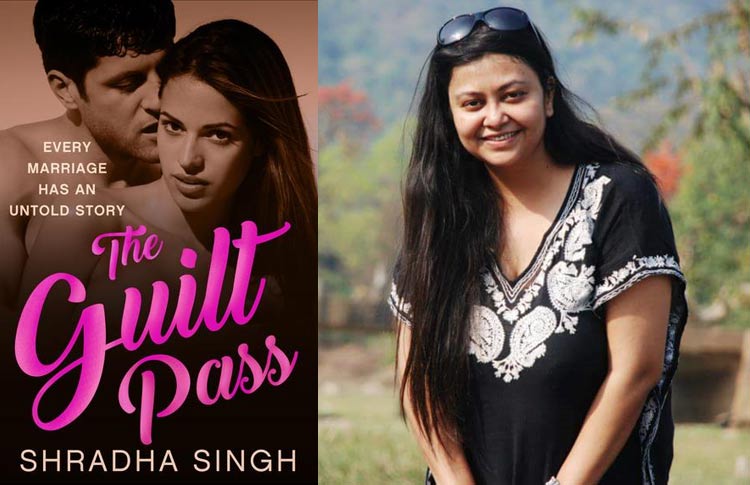 “A woman accepting her sexuality boldly? Oh my god! What a blasphemy! A big tauba-tauba!” Dead-on wasn’t I in depicting the high-class mentality of our amazingly narrow-minded society?

Shradha Singh’s book, The Guilt Pass, talks about a married couple celebrating their 10th wedding anniversary and gifting each other a ‘Guilt Pass’ – the chance to have an affair with anyone they like, once. The reader is left hooked to find out whether the lives of the characters remain the same after this. The book explores the complexities of relationships and delves into Polyamory – the practice wherein one has sexual relationships with others outside of marriage but with the consent of their partner.

Shradha Singh, the mother of an adorable 9-year-old daughter, is a Radio professional, lyricist and a writer based out of Mumbai. She currently works as a Programming Head of Ishq 104.8, India’s first Romantic Radio Station. But apart from being blessed with writing zeal, she has another talent – to change age-old perceptions of love, women’s sexuality, and marriage.

A woman writing erotica, while this may not raise eyebrows in a progressive community, in India it surely does. But you went for it anyway.

I grew up reading cheesy Mills and Boon books. I would cover them under my physics textbooks. I couldn’t fathom why consuming erotica should be sinful and why women should shy away from reading and writing this genre. It has been my mission, if you say, to not just write, but see women reading openly.

I had forever wished that women should pen down their fantasies because until the time it was written by men, it would be prejudiced and illusionary. An erotica written by women will always have a different aroma of sex and liberation. I feel that erotica is not only about sex. It is secondary to a strong storyline, plot, and characters.

The characters in your novel practice Polyamory. But apart from writing a fictional account of it, what are your personal thoughts on Polyamory?

Monogamy is very overrated and it doesn’t exist. A human being is not monogamous by nature, it is something we forced upon ourselves to achieve a “civilized” society. We cannot NOT yearn for another human beings affection at some point in our life even if we are married.

Do you think adopting it in real life is possible?

Nope! As I said, we’ve been so well conditioned in the monogamous way of life that even the word ‘Polyamory’ triggers turmoils. Thus, practicing it becomes complicated.

Is this the first novel you’ve written?

Yep! But writing has always been my passion. I’ve written television shows for MTV for Anurag Kashyap which have won the Indian television award. I’ve written series Halla Bol on sexual harassment for channel Bindass.

Your book explores the contours of sexuality but in what ways do you think you are empowering women through your book?

The power of fantasizing, I think, is very important for a woman. When a man writes erotica, he usually objectifies woman’s body. My story includes a woman’s point of view.

Me writing this may be the herald of a new age where women are not shying away from neither themselves or from reading about the same. Who knows, maybe this will be their trigger for writing down their hidden fantasies too.

Looking forward to the same. So, Shraddha why don’t you tell me about your Guilt pass in life?

*laughs* Okay, here it is. I once met a chef, and god! He was cute! And call it my lucky stars, he invited me on a date because I said I couldn’t find any Chinese food. Strange, na? I couldn’t resist and went for it, after all, he had got this chinese chef to make food for me. Does it work as an excuse? Although, I think I need none. (we both laugh)

I have a Guilt Pass for this interview, too.

Okay, let’s start with the one celebrity you would absolutely love to have an affair with. *wink-wink*

I have this major crush on chefs, particularly Anthony Bourdain. He is my secret desire. And you won’t believe, I have sent him love messages many times on his social media profiles.

Ooh! Next, what part of your body are you in love with?

I am strangely remembering an Aishwarya starrer song here. So what is that one compliment that turns you on?

That I have a wonderful voice!

You do have a wonderful voice. Tell me your reason for opting digital publishing for your book?

I had this urge to experiment with it! Juggernaut had come up with a new app which was trending for being easy and handy. I loved the experience.

I thought that getting your book published, especially the first one, is a big challenge.

It is time-taking, surely. Even if you were to complete your manuscript in 3 months and expect it to hit the market in a short period, then my friend, you’re grossly mistaken. The to-and-fro takes way too much time.

And if you intent to publish sequels and don’t want big gaps in between their publishing dates, it is better to work on the books simultaneously.

Good advice. You must have closely observed how society tends to judge a woman for things they shouldn’t.

Yep! And I’ve personally experienced the same. You see, I love to travel a lot, sometimes alone, sometimes with friends. People don’t take time to judge your character when a woman does this, aiding their backward thinking with comments like “Oh, your family and husband allows this?”

Same I have seen about women having tattoos, piercings who are thought to have ‘loose characters.’ God knows how getting inked is linked to her character graph! And above all, if a woman says ‘NO!’ to all this shit, the world throws at her, then this judgmentalism breaks even the highest records. “Who is she to deny being a victim, eh?”

Well, what did your daughter think about your book?

The funniest reaction! She knew that I was writing a book but about what she had no idea. But you know kids, how inquisitive they are. So, one day she messages me a link to my earlier interview about the book, congratulating me, anf then she added that the cover picture is “shame, shame.” She asked me when she would get to read it. I said, “When you won’t find the picture ‘shame, shame’ anymore.”

Haha! If I am not wrong you’re not like other parents, hellbent on shielding their child from the world?

Of course, not! Like when her friend’s parents were going through a divorce, while other parents would have denied explaining the situation to their kids, I made her understand it all. Obviously, not in the way we converse with adults, I explained it in a way she would get it.

Why don’t you share with us your definition of a sexy woman?

A woman with high self-esteem, secured in her own self, someone who takes pride in her sensuality.

However, this confidence is marred by the fact that women judge themselves based on their partner’s reaction. What is your pursuit of body confidence?

Stop looking at yourself from other’s point of views, because that will only make you unhappy. Why not look at yourself from your perspective? Trust me, you’ll be at peace and find that self-esteem within yourself.

So what’s next? Should we expect a sequel soon?

Not a sequel, but yes, another book is in the making, a romantic-erotic genre. There is still much to explore in this genre.