When An Acid Attack Survivor Has To Cover Her Face, It’s A Failure On The Part Of Society: Tania Singh 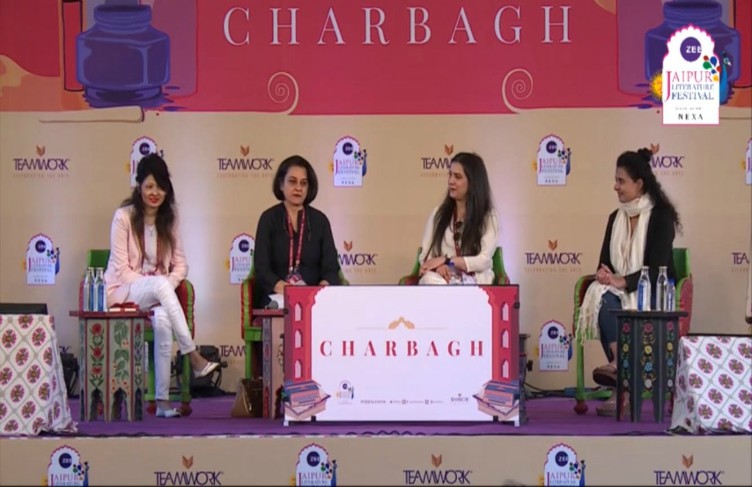 Acid attack is a crime very specific to South Asia. Or as Namita Bhandare explained in a recent panel discussion at JLF, “Despite the Supreme Court ban on the open sale of acid, you can still walk out and buy a bottle of hydrochloric or nitric acid for as little as hundred rupees a bottle. It is one crime that not only shamefully exists in this day and age but in fact has a rising graph.”

Ever wondered why? Because we are a selfish and myopic society that fails to take notice of anything that doesn’t affect us, until it affects us. The same idea was dissected and discussed in the #JLF2019 session titled Make Love Not Scars: Being Reshma by acid attack survivor and activist Reshma Qureshi, author of the book Being Reshma Tania Singh, founder and president of Make Love Not Scars foundation Ria Sharma, and Namita Bhandare.

During the discussion, Reshma shared her story and how she was attacked by her sister’s in-laws who were seeking a way to avenge the insult that she had brought to their family by asking for a divorce on 19 May 2014. She shared that since then only one of the three attackers have been caught by the police.

But what makes it worse for Reshma is that she has to visit the court every single time and come face to face with her attacker which as she shared is not a pleasant experience at all. “I have to stand there as he looks me into the eyes. It reminds me of how he held my face and hair and poured acid on me. Why do I have to go through this ordeal? Aisa nahi hona chahiye,” she said.

She further added, “I have undergone 9 surgeries till date. At one instance, I am summoned to the court right after an eye surgery and I was told that if I don’t make it on time than the attacker would be released.”

Namita responded to it by stating that all of this keeps happening in the country because we fail to realise the pain that those attacked by acid have to undergo and thus fail to take a strong stand against it.

She also quoted a Cornell Law School  2011 study: “When acid first comes in contact with skin it feels wet and cool, excruciating pain follows within milliseconds, the acid corrodes skin and flesh to reach the bone. When thrown at the face, it melts away eyes, ears, nose, lips, mouths, and eye lids. It takes five seconds to cause superficial burns, thirty seconds to result in full thickness burns. Deeper wounds actually hurt less because they burn off the nerve cells.”

“I am reading it to you not because I can sensationalize but because we cannot imagine the pain that follows,” she added.

Rehma then shared how the pain that follows functions on so many levels. One is the literal physical pain. Then comes the pain of societal stigma. She said, “Since the acid attack survivors have been defaced, we constantly feel ostracized, as if we are not humans, as if we don’t exist. Why?”

“Going out of the house after attack became almost impossible for me. Whenever I used to go out with a covered face, people would say things like ‘her life has been ruined,’ ‘how will she get married’ right there on my face,” she added.

She further shared that she had studied only till 11th as she had to discontinue her education after the attack. However, it’s not her educational qualifications that pose the biggest hindrance when she goes out seeking a job, it’s her face.

She further added that the need right now is to “spread awareness. Until we don’t understand the extent of the problem how do we make a change? Secondly, we just need everyone to support the cause.”

Ria also took the opportunity to applaud all the survivors who refused to succumb despite the attack and have made a strong community that is actively fighting against the crime. She said, “The survivors has made such a valiant effort to be the face of this cause and for that honestly they need great applause. They themselves are leading this amazing phenomenal movement and that is why we are finally seeing some sort of change.”

She concluded the session by advocating a complete ban on acid sales in the country and gave the example of Bangladesh, which has managed to bring down their acid attack rates by 80%. She added, “It is very important for us as citizens to hold the authorities accountable for the causes that we care about.”