We View Women Very Differently And They Are Not Equal Citizens: Kiran Mazumdar-Shaw At JLF 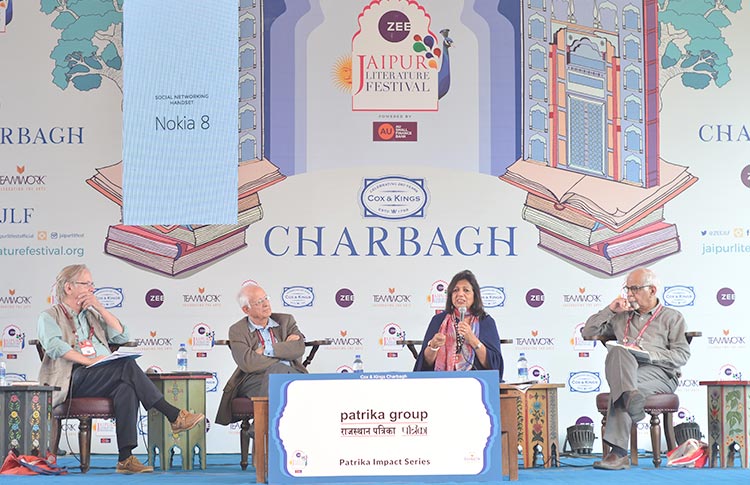 It’s the penultimate day of Jaipur Literature Festival’s 11th edition, but the enthusiasm of the crowd and the speakers is intact and, in fact, is on its peak.

The session, The New Wealth of Nations, by Arun Maira, Kiran Mazumdar-Shaw, and Surjit S. Bhalla in conversation with John Elliot, discussed the importance of education and how it is the new wealth of developing nations like India at length.

A renowned economist and author of The New Wealth of Nations, Surjit opened the session by enlightening the audience about his startling observation and said, “Though education has been around for hundreds of years, it wasn’t until 1960 that the Economist Gary Becker documented the role of education in contributing to the increase of income.”

Kiran Mazumdar-Shaw, one of the leading women entrepreneurs of India, and Chairman of Biocon, added to the discussion by saying, “Education in isolation will not create wealth. The issue is that we do not differentiate between literacy and education. I think it’s the research and Innovation that’ll create wealth, but unfortunately, that’s missing from the educational policies in our country.”

Arun Maira, a Management Consultant and a thought leader, also took the chance to highlight an important issue pertaining to how we measure education in our country.

“The biggest issue is that we are looking at people and their problems in numbers and statistics. For example, you are measuring the time a child spends in school, but what about the assessment of the capabilities and skills actually acquired by the child in school? If you are counting then count the right things!”

“There’s an urgent need to not improve only the quantity but the quality of education, too.” added Arun.

Surjit then took the turn to discuss the role of education in women’s empowerment.

“In its 1000 years of existence, for the first time the Oxford admission list included more girls than boys. Empowerment of women is the biggest story of 21st century and it has all happened due to education.”

Arun argued against Surjit’s statement and said, “Of course, we are finally waking up to the reality that the women must be empowered, but are they yet empowered? No! There’s still a long way to go.”

Even Kiran sided with Arun on this argument and discussed, “It’s commendable of the government’s singular focus on the education of girl child. But, the fact remains the same. We view women very differently and they are not equal citizens. I mean just look at the pathetic condition of our boardrooms. Be it at the top level or at the grassroots level, women are not empowered enough.”

Surjit also pointed out that the biggest problem with education in India is the reservation system and Kiran agreed to his point of view by saying, “Exactly! And, if every child gets the right to education, then there’ll be no need for the Quota system.”

Well, the biggest takeaway from the session was that while education has shown its power as to how it can transform people’s lives for the better, we as a developing country need to find ways for making quality education available at the grassroots level and to the young girls of the country.

What are your thoughts?