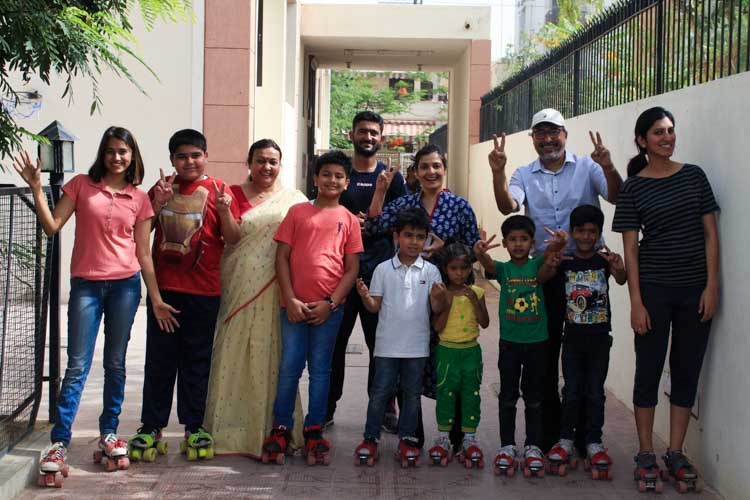 Not every day do we wake up and break our jaws after falling on the ground. And, life especially gets boring in our 20s. It’s not me; it’s the child in me who is reminiscing the school-time summer vacays.

Last year, I got my dose by going rock climbing with the troop, this year has been rather sookha. Lady Boss Ana noticed my restlessness and set us up on a mission to learn how to skate. I remember what happened the last time I skated.

Remember how Rohit from Kaho Na Pyar Hai died after his bike went skidding? That’s exactly how I went tilting down and scraping both my knees. Yes, the marks are still pretty much there.  But, should I already tell you what happens at the end?

Many of us bloggers & even Lady Boss Ana had chickened out from going skating. The only ones that hung around were Blogger-in-chief Lavanya, our social media manager Anvita, Photographer Chhaveesh and I.

We reached Beacon Public School and met Sharmila Galundia, the founder Principal. Mubarak sir was adjusting the skate length as per the size of our feet, as the song, “Oh my friend Ganesha, tum rehna saath humesha,” played in the background. We saw little children stomping away with the skates, and we sat on moodhas wondering whether or not we should have put them on.

“See, I’ve skated as a kid,” Anvita said, like a pro. Her pair was ready. As she strapped ‘em on, I desperately waited for my turn. While Lavanya seemed as hesitant as she was during the mountaineering adventure, she got her courage from the kids.

One child came up to her and said, “Don’t worry didi, see, I’m also skating! Did I fall down?” And, just then, we saw a tiny fellow fall on the ground.

He was laughing. Clearly, it wasn’t painful. After a while, when we’d seen the same kid fall down a few times, we realized that he had been doing it intentionally.

I’d put on the wheels, too, and honestly felt like an old hag around the kids. I tried hard not to stumble and made my way towards the other end of the track. Photographer Chhaveesh was distracting me by trying hard to capture my worst expressions. I won’t lie, the first few times it bothered me, and then I just got over it.

While Lovy waited for her pair of skates, Anvita and I chitchatted with the kids. Two of them stood with their hands firmly on their knees. Anvita said, “Why do you have your palms on your knees? Is this a trick?” We stared them for a while before they finally answered, “Um, we are just tired.”

Wow Anvita, way to get trolled by the children. Though, they did teach us a couple of tricks that got us going.

“When you want to stop, fix your posture & stand straight.”

“Use the railing as you skate, or you will fall down.”

By this time, Lavanya had put her skates on and Coach Mubarak was showing her how it’s done. “Just lift one foot at a time, and place it back down. Use the railing, it will help you build balance. At the end, it’s all about building steadiness.”

I could almost hear Lovy saying Ram Ram Ram Ram, “I don’t want to do it!” she said. She took a couple of rounds with the coach while the little ones consistently came forward to encourage her.

Lavanya buckled up and tried to do it herself, and when it just refused to happen, she thought it would be better to observe from a distance. Anvita and I, meanwhile, were in a different world. We decided to race like amateurs. We drew an imaginary start line, Lovy being our finish line.

We ran at the speed of light, tried not to kill ourselves, as the kids cheered for us. Okay, that was just from my perspective. Let me tell you what it looked like from where Lovy was watching.

For Lovy, and the rest of the others, we were struggling to remain straight, and as we started the race, we were slow but not steady, it looked like we could fall any moment, and so, the kids were cheering for us to fall down, and Photographer Chhaveesh fixed the camera on us, to capture it.

Our vacay mode also helped us get the child in us, out. While returning back, we grabbed some poha from a thadi, and sang in synchrony. “Oh my friend Ganesha, Tum rehna saath humesha.”