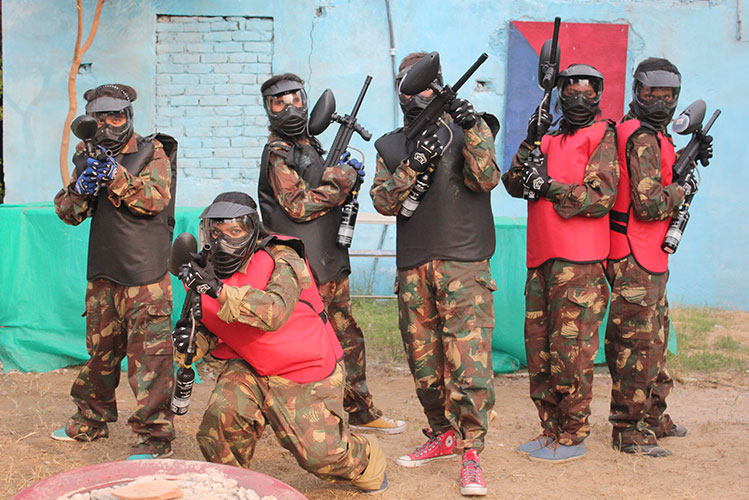 “You are never going to find any burger joints when we are there, let’s get some now.”

I am not a big fan of adventure sports, and so, wanted to fetch myself some snacks while witnessing the fun that was awaiting me. Wait for it!!!

We lost our way to The Timber Garden Adventure Club. Our cab driver had given us all kinds of angry expressions until we offered him a McDonald’s veggie burger to keep him calm. Food always…always helps.

“Let’s keep going through the bumpy roads and dense traffic, anything for an adventure trip!” yelled Jayati in our ears.

Before I begin telling you about our adventures, let me introduce you to our team for the day. You know me (Lavanya), Jayati, Komal, and Photographer, Chaveesh. Meet Komal’s elder sister, Aparna, her brother-in-law, Dave, and her BFF, Himanshu.

We began with Rollerball Zorbing, and I swear to god, my laughter during ‘the show’ was the loudest ever. You ask, why? The way Jayati rolled over and over again in that huge ball made sure all of us get our share of warm-up-laughs. See for yourself:

This is *never* going to get old. ROFL!

Our Komal (who looks like a total stunner on the stage while performing) left no chance to gain the limelight here also.

The founder of the place, Mr. Amit, made us enter one more humongous ball. The Body Zorb was something Komal and her fam were excited about. Dave decided to get the jiju-saali fun on the ground by inviting Komal to be his opponent. Result?

Excuse me for a minute. *HAHAHAHAHAHHAHAHAHAHAAHAHHAHAA* Dave gets brownie points for that victory-dance.

Being a Pahadi, I am not really scared of heights. No, seriously. So when we were asked to do the low rope bridge, I was the first one to jump at it. However, since Aparna was our guest, I decided to let her go first.

Sr. Panwar, though confident, was spotted shaking a little while crossing the wooden bridge. Komal being the evil sister that she is, began giggling as I joined her.

“Do not insult the mother alligator until after you have crossed the river,” declared Aparna.

As much as I don’t want to describe what happened to me while I was up there, the guns on my head by my team is forcing me to tell you that I TOOK AN EFFING 15 MINUTES TO CROSS A 10 METER LONG WOODEN BRIDGE. YES, I WAS SCARED AF.

When it was time to play the Volleyball, both Jayati and Komal started blabbering about how good they were during their school days in sports. Without sounding rude, I will let the pictures explain to you what happened during the game of Volleyball.

And, showing off our caliber:

Something similar happened when Himanshu took the lead and insisted he go first and impresses everyone during archery. TBH, he indeed did a pretty good job. Out of five, he could hit the bull’s eye three times. *round of applause*

Check out Dave, trying to look all serious in a badass skull t-shirt and with that cute face.

Before we left, we decided to get our hands dirty in the game of Paintball. Trust me, the fight was real.

Like militants, we killed our weirdness in those XXXXL uniforms. Jayati, of course, being the cutest, won the camera attention.

“Let our forces come together making sure we punch every blue ball in the enemy’s face. Shall we?” – was one thing all of us said in chorus.