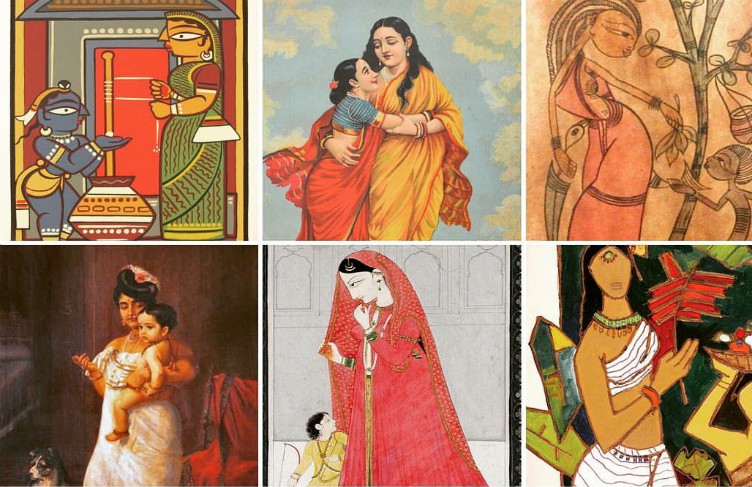 I state the obvious while saying that the idea of art is synonymous with the most basic law of universe i.e. creation, something that umbilically ties it to motherhood as well. “No wonder that right from the very, very ancient times, you can find mother and child imagery in Indian art,” says Medhavi Gandhi.

There really doesn’t exist an emotion or a feeling as strong and unadulterated as a mother’s love. Needless to say, the basic essence of motherhood remains the same all across the world. However, we also believe that every mother is unique in her own way.

Thus, IWB decided to explore the varying aspects of motherhood so as to ascertain what is it that shapes every mother and sets her apart from the rest. We thus sought help from Medhavi of The Heritage Lab, a platform dedicated to creating and nurturing public engagement campaigns focused on museums, art, and heritage.

As Medhavi guided us to some of these artistic gems capturing motherhood in all its glory, we tried to interpret the subtle nuances of the mother-child relationship as they changed from one artwork to another.

Here are some of the artworks that we found rather intriguing and attempted to interpret with some assistance from Medhavi:

It was probably the image of mother Goddess in Indian discourse that inspired all the subsequent representation of the mother-child relationship in Indian art. Medhavi gives the example of this FN Souza, the inspiration for which “perhaps has been taken from the Christian theme of mother and child.”

Medhavi shares, “In the Mughal times, the emperors sort of named their mothers after Mary because they were so taken by the idea. In fact, Akbar changed his mother’s name because of the same reason.”

According to her, there is a unique tenderness to the image as both the mother as well as the child seem to be getting accustomed to the newness of this experience.

“The mother and child image has also been really popular in folk culture,” says Medhavi. This depiction of a mother and child from Santhali tribe is steeped in culture as the mother seems to be teaching respect and reverence to the child.

This classic Jamini Roy, with the depiction of Krishna and his mother is an image of pure “warmth and care.” It is sure to strike a chord with every individual who has moved out of the house and gets asked “Khaana khaya?” by their mother every single day.

This Ravi Verma painting “depicts a rather different kind of mother-daughter relationship. The mother comes to the rescue only when Shakuntala really needs her. That’s the scene that he has portrayed here.”

In the painting, while Menaka is seen rebuking Shakuntala for getting herself in a certain situation, there also is the presence of unconditional trust in the latter’s candor, assured that her mother is finally here to rescue her.

This Malayali mother, again by Raja Ravi Varma, brings out yet another facet of motherhood. “The mother is shown readying up the child. It’s a very innocent moment reminiscent of the days when the children are growing up and the mother can’t leave them even for a minute, she has to be always there side by side?”‘

Bringing up a toddler is literally like living two lives at once, and this painting is a beautiful depiction of the same.

This Mohammadian mother by Ram Kumar which is unique on so many levels. Medhavi explains, “I have never come across a picture of a Mohammadian mom and child before. It is really rare.”

Medhavi feels that there is a distinct tenderness with which every artist approaches these images, thus making every image slightly different from other. “They all bring out different aspects and different types of motherhood,” she says.

However, that doesn’t change the fact that there also exists a common theme that binds all of these artworks in a common thread i.e. the mother as the eternal picture of sacrifice. Medhavi explains, “I think it’s just an innate quality in mothers to put the child before themselves. So, yes that is the dominant narrative which can be found in every artwork because that is how mothers are, no matter what community or social strata you are looking at, that quality remains the same.”

She thus says that it’s time that the narrative gets altered. She explains, “It is always the mother in all the artworks who is depicted as the caring figure. You never see the child caring for the mother. She is worshipped, but rarely cared for.”

She adds, “Some modern and contemporary artists depict mothers and children sitting together and sipping tea. I think those are the kind of images that we need to focus on now because it’s not just about giving your life up for someone. The image of a nurturing mother has always existed in art but the child giving back also has to be there.”