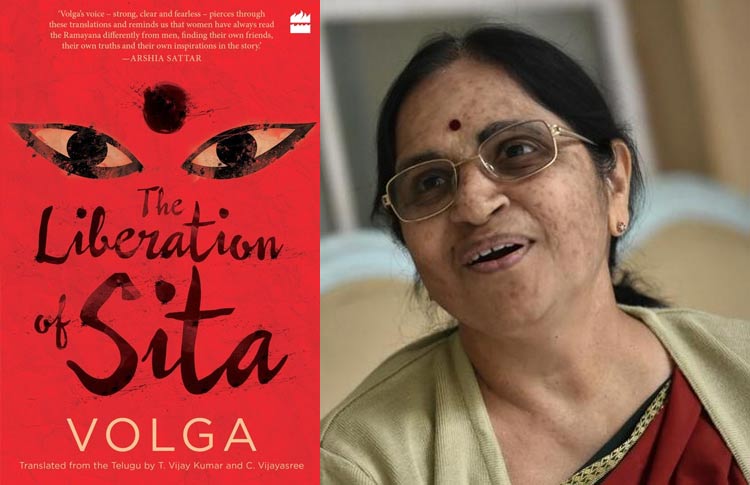 Ramayana for us has always been the story of a king, Rama who was exiled and how upon his return to Ayodhya, he always aimed at establishing a just monarch. Often the retellings of the epic tale follow the same arc but The Liberation of Sita by Volga is not a Ramayana of war and rivalry, but a re-envisioning of the epic through Sita’s eyes.

It was early 2017, and Jaipur was abuzz with the excited atmosphere of JLF (Jaipur Literature Festival) and on we went to catch up with the best authors. One of the sessions had Volga (Popuri Lalita Kumari), the well-known Telugu writer and the author of the book, “The Liberation Of Sita.” In the plethora of literature, there has been rarely a Ramayana which was recounted by Sita. We were so in!

After Volga read excerpts from her book to explain her interpretation and understanding of Sita, we asked her a very crucial question: Why people do not talk about Laxman’s wife, Urmila?

“People only know that Urmila slept for 14 years, I have dedicated one of my writings entirely to Urmila. I explained that while sleeping, she was actually traveling in her mind in search of power. Also, I believe that Urmila was the real prisoner in all of it and she is the one who played an important role in liberating Sita.”

The Liberation of Sita was translated into English by T. Vijay Kumar and C. Vijayasree, tells of a very different main character from that of Valmiki’s and Rama’s Ramayana. It narrates the life of Sita, who after being abandoned by Purushottam Rama, embarks on an arduous journey to self-realization. She raises her sons by herself in Valmiki’s ashram and embarks on her own adventures. On her way, she meets every minor character of the epic saga – Ahalya, Surpanakha, Urmila – and her inner self-starts understanding the many complexities of life.

Urmila, who had gone through a penance of silence for fourteen years while Lakshmana accompanied Rama into the forest, tells Sita: “You must liberate yourself from Rama… Each of these trials is meant to liberate you from Rama. To secure you for yourself. Fight, meditate, look within until you find the truth that is you.” This is the last and most important lesson that Sita learns on her journey.