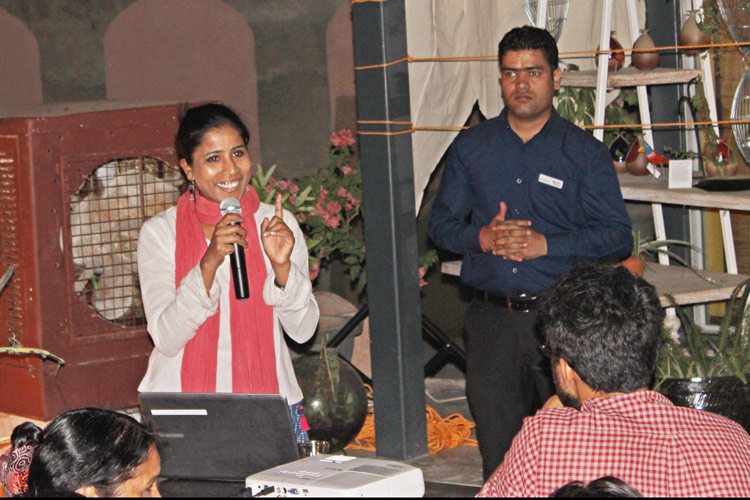 Usha Prajapati established Samoolam – Awakening Gaia – few years back in a quest to improve the lives of Bihari women. At Samoolam, crochet craft training is given to rural women using low investment in terms of equipment and raw materials. The final products are then sold in exhibitions around the country and in outlets of Fab India, Anokhi, etc.

After working in countries like China, she decided to come back to India and help the women of her village become financially independent. She explains , “Samoolam is all about coming back to the roots.”

But that not all that pushed her to return. She has a dream to bring her Bihar on the world map and change people’s perception about the state. “Biharis are considered to be ignorant and immoral. To be called a Bihari is an insult. The word itself has turned into a cuss word. With Samoolam doing well, I want to wash out this narrow stereotype people have for us. We are talented, and I want to show this to the world”, adds Usha.

JWB got the opportunity to meet Usha at the 4th edition of Maahi Roj, organized by AnanTaya, where she shared her ultra-inspiring journey with us.

I planned to collect old cloth pieces and make something fashionable out of them. I invited women from the neighborhood to share my idea. Few of them like it but majority rejected the idea saying, ‘We’ll not touch used clothes. What if they belong to untouchables?’ That was my first setback, and I learned how the evil caste system had over-shadowed our minds. They weren’t eager about earning a livelihood but concerned about ‘touching’ things they are not supposed to touch.

However, I somehow convinced few women to join and form a group. My father gave me his garage to begin the workshop and my mother offered to teach these women the art of crochet. I found the deal attractive as crochet requires a minimal investment, and I wasn’t supposed to invest in trainers and rental space.

Meanwhile, the men of their families were resistant of sending their women away from home for work. Their sole concern was security. I remember meeting the men to convince them. I told them about my plan to make them work from my home. Only after visiting my place did they say yes. We signed the agreement papers stating the same working conditions.

Samoolam means community. I wanted my community women to produce items which were not common and are modern, at the same time. I had seen crochet table covers, laces, etc.; that’s why I insisted on creating something different which the world outside Bihar would love to buy. We zeroed in on creating crochet jewelry like necklaces, bracelets, etc. I got them various kinds of fancy zari threads onto which they weaved colorful crochet motifs.

I don’t believe in the donation. My plan has always been to earn profits and invest them in hiring new talent. In a span of a couple of months, I made management systems wherein few groups are formed that receive training of crochet-weaving. This goes on for six months until one day they are expert enough to join the production team. Whatever the production team creates is sold in the market. We have this grading system that is according to how well one performs. This also determines one’s salary. This system has really inspired women to do well and learn better.

Amazingly, seeing these female workers earn a livelihood out of what they learn at Samoolam has inspired other women in their extended families to come and join us.

I am not a leader or employer at Samoolam. My vision is to make leaders who will take Samoolam forward. I don’t live in Bihar to inspect their work. They keep a check on themselves and learn from each other’s mistakes. I operate from Delhi where I work as a Consultant. I do this to earn my livelihood; I don’t withdraw any salary from Samoolam. The profits go to further investment in raw materials.

I foresee these women becoming future leaders. A handful of them has already formed smaller groups to train new recruits. Isn’t that amazing? They’ve saved some money from their salaries to buy Smartphone, through which they WhatsApp me pictures of new designs and take my approval. Last month, we got their bank accounts open in a local Mahila Gramin Bank.

Both my parents are not educated, but they made sure to teach me and my 5 elder siblings. Today, they are in their eighties supporting me with all their might. I also want them to live a happy life, a busy life when the kids are not around. They have more than 100 Samoolam women working from their house every day, and I know, they enjoy being around them.

After the session, team JWB felt empowered like never before. And before leaving, we asked her one last question of the evening – “What keeps you going?”. To which, she replied, “My pursuit of learning one new thing every day without fail.”