This World Tourism Day, Hawa Mahal Has Got its First Feminist Audio Guide 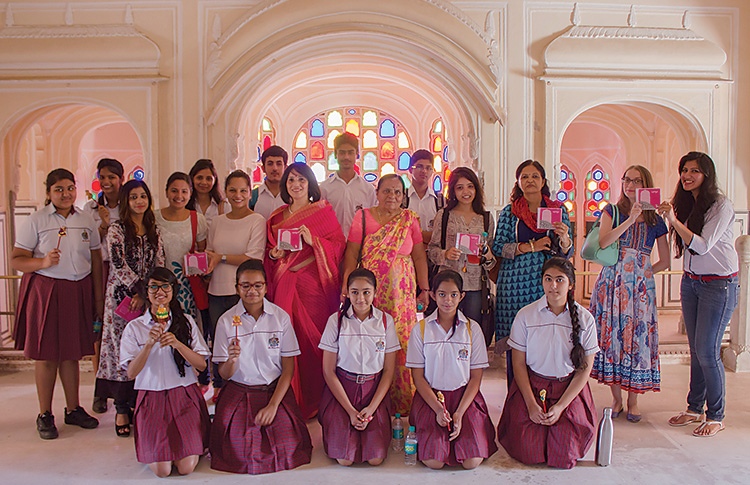 It’s Word Tourism Day! JWB in association with 94.3 MY FM has organized one fun activity for the occasion! Hold your breath… introducing… for the first time… the Feminist Tour of Hawa Mahal! We also launched the first ever Feminist Audio Guide of Hawa Mahal (psst. The Hawa Mahal authorities will include this guide into the library of Audio Tour Guides!). Let me take you down (or maybe up!) the road to witness one of the coolest excursions of all time!

When I entered the giant gate of Hawa Mahal, the students of The Palace School along with their Principal, Mrs. Urvashi Warman, had been already assembled at the threshold. They seemed full of joy, enthusiasm and couldn’t wait for the excursion to begin! Our troop was shortly joined by Writer and Journalist Mrs. Sapna Mahesh, and President of Rajasthan University Women Association (RUWA) Mrs. Pawan Surana, and Journalist Bakul Mahesh.

RJ and Storyteller Mrs. Sharma from 94.3 MY FM was our esteemed tour guide!

Ahem! She cleared her throat and that was indeed an indication that the adventure was set to begin! We were escorted in, to find ourselves surrounded by walls on all sides. In the centre was a wide veranda that bore an 18th Century bathtub or what they called a hamam, precisely in the middle.

It is ironical that most of us, sightseers, being from Jaipur, had never seen the Hawa Mahal interiors. In fact, it looked nothing like what we had imagined it to be! Our guide asked us if we had thought that the wall defining Hawa Mahal was its entrance. Most of the students nodded.

“Wear your spectacles now!” she said!

“Today we are going to look at Hawa Mahal from a very different point of view. And for that, you need to put on a brand new type of glasses!”

Vaibhav, a Palace School student, quickly enacted putting on glasses, in the style of Rajnikanth!

She asked everyone if they knew what it really meant to see things from a new perspective, or to put on new glasses. To which, Vaibhav, the star of this show, replied, “It means we should put all of our orthodox thoughts away and concentrate on the fresh vision.”

Commendable answer! The group was slowly warming up; and the guide took us inside to walk upon the ramps. We climbed up the narrow walled hallways to reach the first floor.

The palace was meant for the women of the Rajgharanas, where they were “protected” within the four walls. The architecture of Hawa Mahal is very beautiful with delicate inscriptions and paints, provoking another feminist thought that women had been nearly a decoration in the lives of Kings. Women were treated as trophies that the kings had, not to mention, a symbol of royalty and power.

We moved forward with students huddling together in different groups! Ah, school days.

RJ Mrs. Sharma also added by telling us that the prime motto of Hawa Mahal was to keep it cool and serene. The chief purpose of the windows was the natural air cooling that kept the palace chilly even during high temperatures.

Women were like those winds. Like the winds, women had fresh thoughts, which only mirrored to and from within the walls of the palace.

Through narrow passages, where we were trying hard to fit two at a time (such a sad cause), queens/princesses/mistresses would go from floor to floor. Our guide also pointed out something very interesting. Mrs. Sharma noted how the ramps were all created circularly. The women could never grow, they surely went up, but moving in circles leads nowhere!

We all peeped through the tiny jharokas (windows), imitating to be the women of the eighteenth century. We could see the largest Sundial in the world, people moving in the streets. But there’s one thing we couldn’t do. We were not able to see the shadows the sundial made. Could that be how those women felt? They were just passive watchers. We moved further up through the narrow passages, somewhat in a line.

Having such learned women with us, discussions were bound to happen! Our guide told us how the Purdah System was the main culprit behind confining women within the walls. She also explained that according to Doctors, Purdah strained the eyes and then in turn, led to deterioration of the eyesight! So, women lacked clear vision, both physically and mentally. Mrs. Pawan Surana chimed in by describing her experience to the sightseers.

She told us about how the palace had a tunnel which led to the Hawa Mahal. The women were carried through these tunnels so that nobody could see them. The Kings felt great that they had gifted a new palace to their wives, but for real, these women had seen no other world apart from walls and tunnels.

Mrs. Pawan Surana continued, “Yes, but the situation had changed a little when Maharani Gayatri Devi got into action.”

To which, the Principal of The Palace School, Mrs. Urvashi Warman added, “When MGD Girls’ School came into operation, Maharani Gayatri Devi had to request parents to send their daughters to the school, and initially they all rejected. After much convincing, they were only allowed to go by buses which picked the girls from their homes. These buses had curtains so that they would not be seen by anyone. When they were dropped off, there were servants to receive them – and girls were taken into the premises unseen.”

The students were now even more interested in the discussion, while at the same time they were closely observing the jharokas.

Mrs. Pawan Surana told us about a very interesting experience, “I remember how Lakshmi Kumari Chundawat wanted to raise her voice against Sati. She asked me if she should do it. She was a member of the Rajya Sabha at that time. When she spoke in favour of the Anti-Sati movement, Rajputs had attacked her home and broken pots and what not! That time, I wrote the letter to a newspaper, signed by 50 women. We are proud of Lakshmi Kumari Chundawat! Afterwards, she sent me a message congratulating women of Jaipur! Many Rajput women were so grateful that we had won! They were so inspired!”

Moving forward, we finally reached the top floor and stood where the winds could touch us, and fly back out. They are the winds of change! These winds can communicate with an outer world! Everything that we have discussed till now surrounds us, but the winds of change are the reality of today.

“This is so much better than AC!” An enthusiastic student commented with mumbles and giggles at the background.

RJ Mrs. Sharma spoke directly to the students asking them if they felt that their parents were protective sometimes. Many heads urgently nodded and giggled! She said that a parent being protective was wonderful; in fact, there are certain things that they warn you about, because they have lived your age. However, protection should not be a limitation. And yes, you should be allowed to make your own mistakes under all circumstances.

“But mistakes are made just once.” Mrs. Urvashi Warman added.

Mrs. Sapna Mahesh said, “The feeling of freshness is the real meaning of freedom.”

Our guide concluded it by saying that Gender Neutrality and Gender Equality are the main aim that we have to achieve.

We moved forward to launch the Feminist Audio Guide! Yay! The moment of awesomeness! We moved inside the Hawa Mahal hall with colored glass windows (which have been recently installed).

The JWB team launched the Feminist Audio Guide by giving a CD each, to our guests! Yay!

The students were gifted pencils that had traditional women dancing on the top! A woman with a pencil, can write a history!

We had a wonderful time with all our guests, and more importantly we looked at Hawa Mahal from a perspective that it had been demanding for a long time.

Special thanks to RJ and Storyteller Mrs. Sharma, and 94.3 MY FM who contributed to creating this Feminist Audio Guide.

Listen to it NOW!