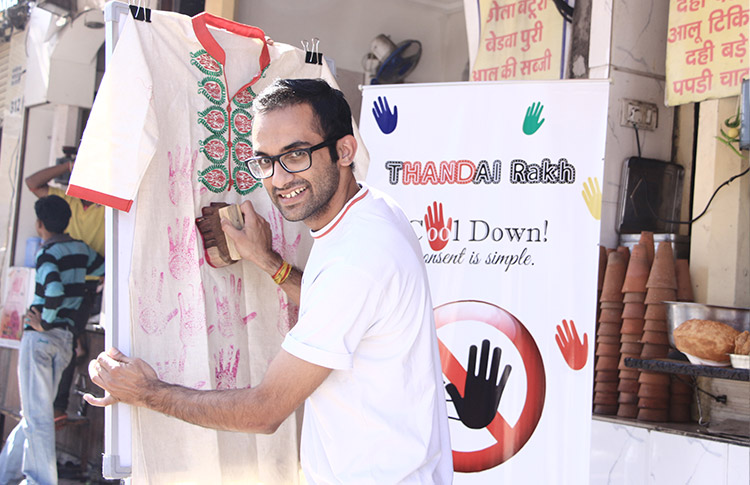 It’s Holi time! What’s the one line that comes to everyone’s mind when anyone says Holi?

Right? But that’s not true. People use that as an excuse for harassment on this fesival. Not-so-surprisingly, families don’t allow their female members to go out ‘unguarded’, or women themselves are very scared to step out of ‘safe’ premises.

IWB‘s Holi campaign this year, tHANDai Rakh, is directed towards acknowledgment and awareness about the fact that consent is mandatory.

It’s not okay for men to grope women and colour them in the name of the festival and then say, Bura Na Mano Holi Hai! So, with thANDai Rakh, IWB visited the city’s famous Lassiwala at M.I. Road, talked to the men about the same and made them pledge to seek the consent of women.

A Kurta was pinned to a board signifying a woman.

The hand-shaped block with CONSENT engraved on it, represented a man’s hand.

Men had to take the block, dip it in Holi colors and stamp it on Kurta with CONSENT.

Initially, Komal and I tried interacting with some men at the Lassiwala and were shunned. After many such failed attempts, when I was a bit dispirited, Komal said, “This is what we are trying to change, the ignorance of people towards such a grave issue.”

Some time later, a man stopped by and inquired about the campaign. He listened intently, and said, “I know it happens, and it’s sad. What you people are doing is commendable. I consent to seeking consent.”

He took the block and stamped it on the Kurta.

Next up was Aman Lalwani. After hearing about our initiative, he was so elated and cheerful about it that he called his friend, Vikas Bhandari, from their car, explained him too, and said, “We are sensible boys. But from now on, we’ll make sure to stop other men from doing so.”

A couple came out of the shop and curiously looked around. When we talked to them, the wife Kirti Kaushik, shared with us one such incident of eve-teasing, “This is indeed a serious issue. I remember when I was in 12th,  a boy from our colony gripped me from behind and colored me. I was dumbfounded, and quickly ran back to my place, crying.”

Kirti and Manish Kaushik with their baby

Kirti’s husband Manish also said that not only on Holi but such things happen every day, and they must stop. And then they, along with their little one, stamped the Kurta in support.

While the duo was talking, many people gathered around to listen. Amongst them, was Aditya Sharma. He told us that because of the harassment, nowadays, most people avoid big Holi gatherings.

Then there was Suresh Kumar, who thought that something amusing was going on, so he too came in. But, when we told them about the campaign, he walked off by saying, “I am coming in two minutes, Madam.”

We are still waiting for you, Sirji!

Komal and I were discussing the fact that most men who came were young, probably under the age of 35. I proclaimed, “I guess, our generation is more open to things and acknowledge such problems.”

The owner of Lassiwala- Rakesh Saini

And it looked as if they (the older ones) heard me. The owner of Lassiwala, Mr. Rakesh Saini, and another passerby Hemant Srivastava came as the representatives of the elder clan and proved me wrong. Hemant said, “We want to make sure that our daughters and other women of the family are safe. Everyone’s mood gets spoilt if something like this happens. That is why we accompany them. But yes, what you are saying is right, too. Women should not be scared. It’s the men who do such shameful acts must be fearful.”

But then he added, “Thoda time toh lagega sabki soch badalne me, haina?”

We nodded. It’s gratifying to see that the mindset is changing for better.

Next to join us was Sohail Khan. He said, “I am sorry I was eavesdropping. I don’t play Holi, but still, I understand the importance of consent.”

Neeraj and Pushpendra Sharma were enjoying their Lassi when we interrupted them. They were confused, however, they agreed. When we gave them the block, they exclaimed, “We have to do it on a girl?”

We all laughed and showed them the Kurta on which they had to stamp it. They sighed with relief.

A girl came running at the shop for ordering. We noticed her face covered in Holi gulaal.

Nitin and Shreya Vyas with Komal

We introduced ourselves to her and spoke about our campaign. She said, “I am Shreya, and this is my brother Nitin. It is so true. I have not experienced it but I know so many of my friends and cousins who have been a victim of eve-teasing.”

“Along with my brother, I would also like to stamp it. It’s to convey Only if I consent and Yes is a Yes and No is a No.”

Sanchit also came forward and stamped the Kurta to show his support.

Later, we celebrated the success of our campaign with chilled Lassi.

Ohh! It was delicious, and Sanchit decided to have one more. Komal said, “Thand Rakh!” *hand gesturing* LOL!

This article was first published on March 23, 2016.
Was this article empowering?
Contact us for your story