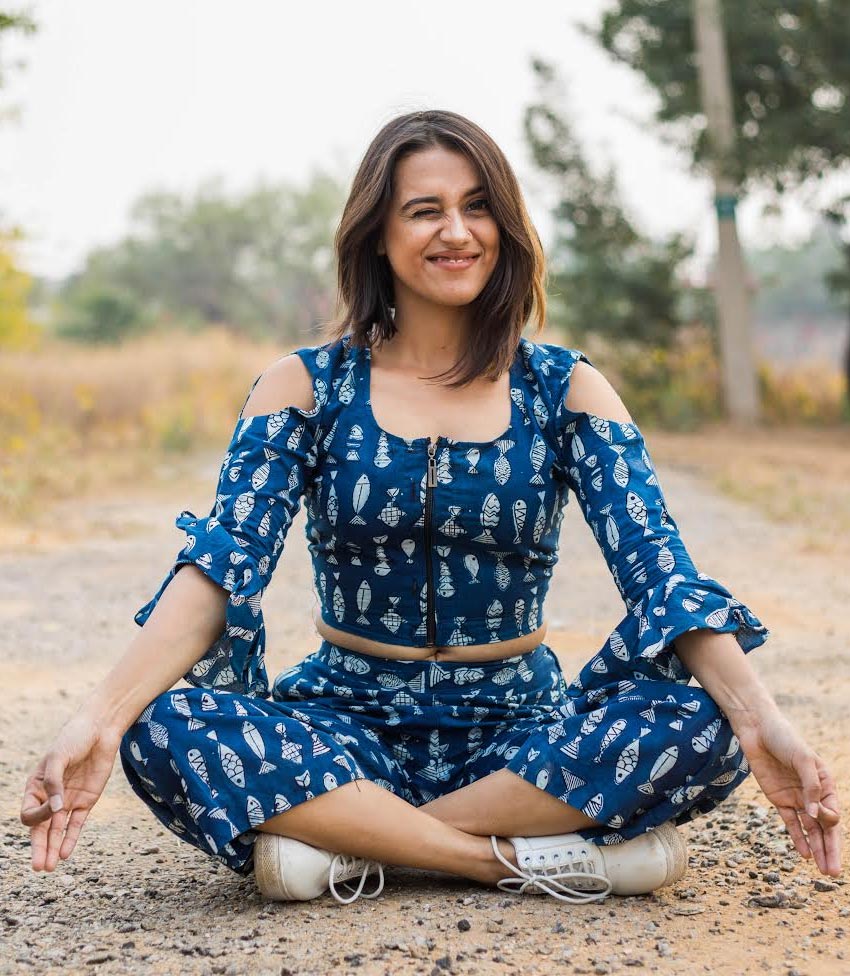 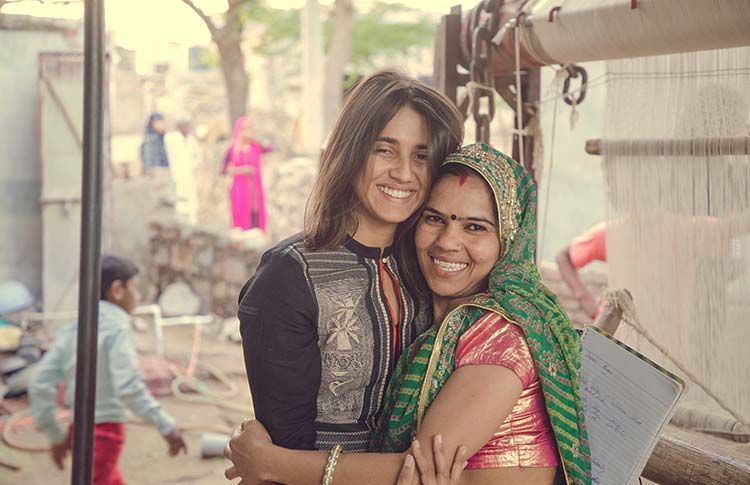 I often find myself humming a Bhojpuri lullaby my mom used to sing to me when I was a kid. And it makes me wonder about the meaning and the stories behind these folk tunes. Our recent visit to the village of Manpura helped me satiate this curiosity.

IWB is celebrating Women’s History Month in a musical way. With our campaign ‘Folk To Work‘, we embarked on a musical journey through the lives of rural Indian women to collect unexplored tunes that these women hum while working.

As part of the campaign, Team IWB, along with RJ Puru and RJ Sarah from Radio Mirchi, visited Manpura Macheri, a village located less than 50km from Jaipur.

The village is host to Shanti Center, a women-led unit for weaving run by Jaipur Rugs. The Jaipur Rugs Foundation reaches out to remote rural areas in order to establish bonds with the village communities, enabling them to start weaving not just rugs but also their own lives.

Our intention was not only to capture the essence of the everyday life and stories of the women of Manpura but we also wanted to collect the unique and now-forgotten weaver’s song called ‘Boli’ that these women hum while working. These tunes will be turned into Folk-Rock renditions by us.

It was a beautiful, clear day and after a smooth one-hour drive, we drove off-road for another half hour to reach the village. The warm welcome by the Manpura women and their army of children amplified our energy and with excitement, and a loud radio-style greeting by RJ Puru, we kicked off the campaign.

The leading lady Shanti Ji narrated the history of the center, introduced us to the weaving process and also shared stories of sisterhood from the unit. We then learned about the meaning of ‘Boli’ which was translated into English for us by Himanshi, the center supervisor from Jaipur Rugs. After that, we decided to take a musical break. IWB singer Komal got busy jamming to the folk tunes along with the weavers, while our beloved RJs joined in to create a Bollywood fusion.

Meanwhile, I sat in a corner, sipping a cup of chai and losing myself to the sound of ‘Boli’. But like music, even tea tastes better when shared with someone. And I turned to find Tara, a 25-year-old cheerful woman, stretching out a hand of friendship with a biscuit on top!

And soon we got talking. Married at a young age, Tara was bereft of education. She disclosed that she was brought up in a household with a drunk father and has seen a lot of violence against women, an environment that pushed her confidence down. She was married off at a tender age and the early pregnancies took a toll on her health.

Tara has been married for nine years now and has two kids, a son, and a five-year-old daughter. She promises not to get her daughter married early and without her will. Despite everything, Tara admits she was lucky to find a happy home and a supportive family in her in-laws. Her husband has been very understanding too.

This March, different women will take over #IWB Instagram to narrate their stories in an attempt to celebrate womanhood. #KnowHerDay #KnowHerStory Meet Tara, a 25y.o. timid yet strong-willed woman who took life by the horns. Married at a young age, Tara was bereft of a good #education. Brought up in a household with a drunkard father, she has seen enough #violence to lose innocence and take responsibility early. She has been married for 9years and has two kids, a daughter and a son. Tara admits she was lucky to find a happy home and #family in her in-laws. Her husband has been supportive too. She took up the work as a #weaver with @jaipurrugs and has been earning enough to support the family. “Mere saas sasur ne hum dono ko apne paeron pe khada hone k liye bola, tabhi se mai bhi kaam karti hu aur pati bhi. Meri kamai se ghar ka kharcha nikal jata hai aur unki salary se hum mote kharch aur bachat kar lete hain.” . (This story is a part of our upcoming campaign #FolkToWork, a musical journey through Indian rural women’s lives. Our first pit stop was at Shanti Center of @Jaipurrugs in Manpura, Rajasthan. The project is in collaboration with @RadioMirchi. Stay tuned for more!) . Her #independence has given her #confidence and she is happy to be able to provide for the family. “Mai bus ye chahti ki mere bachey ache se padh likh jaen. Mai nahi padhi aur shadi bhi jaldi ho gayi. Meri beti shadi ke 1 saal me hi ho gayi thi. Dikkat hoti hai, isliye mai apni beti ki shadi jaldi nahi karaungi. Woh bhi ajkal ki ladkiyon jaise afsar banegi aur apni pasand se shadi karegi.” . With that broadminded thinking and bold dreams, Tara has been weaving a #progressive environment in her family. . Such are the women of today! More such #wonderwomen will be taking over our Insta throughout March. If you want to be a part of it or know someone who should be #featured, let us know. #RealStories #IndianWomen #WomensDay #photostory

66 Likes, 1 Comments – Indian Women Blog (@indianwomenblog) on Instagram: “This March, different women will take over #IWB Instagram to narrate their stories in an attempt to…”

And just when I thought of being cheeky and asking her about their love story, Komal and her newly-formed band of Manpura women started dancing to the famous Kalbeliya song, ‘Kalyo Kood Padyo Mela Mein’. Lured into dancing by the catchy music, we joined in to twist and shimmy a little, only to give up soon.

(Tara’s in-laws asked her husband & her to work and earn for themselves in order to take responsibility. It was then that she started working as a weaver. She uses her income to manage the household while her husband saves up for larger expenses and investments.)

Her independence has given her confidence and she is happy to be able to provide for the family. She giggled and revealed that she even bought a few fancy sarees for herself. Cheers to that!

When I asked her if she has a dream that is left unfulfilled, the spirited woman laughed it off and said, “I am living my dream now. But yes, someday, I’d love to learn dancing!” Well, I share this dream with Tara, and we will definitely live it together someday. Till then, we shifted our focus to a better-known talent of ours, singing.

I asked her if she could sing a song for me, to which she joyously nodded yes. Keeping the teacup aside, Tara sang in her local language.

She then explained, “This song is about a woman who sings to the world about how changing times have treated her. The lady says that when she married and her husband was alive, she lived like a queen. She had all the facilities, she was respected and felt important. She gave all the care and love to her family and also to the needy. But now that she is a widow and is dependent, she has lost all of that. Her four sons and daughters-in-law ill-treat her. The woman sings how the society failed her, with no one offering help or care.”

As Tara finished singing, even though the folk tunes of the song and her radiant face made me happy, the meaning of the song stirred some emotions. It makes you sad, doesn’t it?

These folk songs sing of the reality of women in rural areas, and at the same time act as a lesson for the next generation. I definitely learned a lot from this visit.

But more so, I returned with beautiful musical memories and a friend in Tara.

Stay tuned for more from Folk To Work.