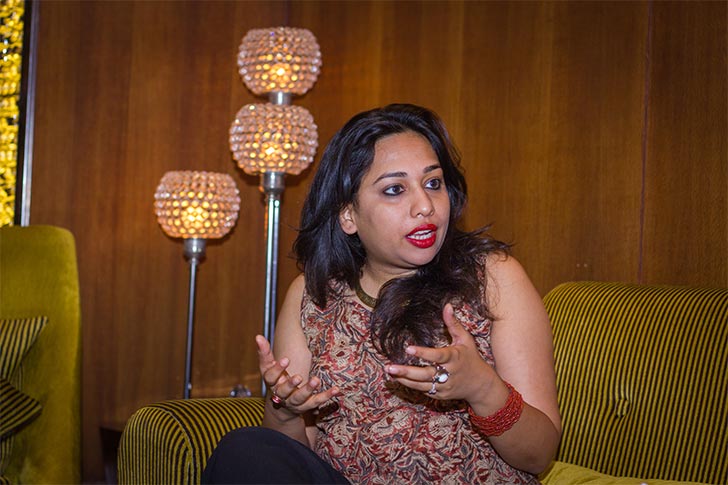 Business lunches are often considered to be rather boring. Even though I was afraid for the same while rushing out of the office for IWB’s Business Lunch with Surabhi Dewra, the vibe she carried fired me up.

After the interesting, informative and tasty lunch with Surabhi at the Hotel Hilton, Jaipur, she corrected her Colorbar lipstick before I stole her away for a brief conversation. Yes, we’d seen the intellect in her, but couldn’t wait to hear what led Surabhi to get to where she is today.

We had a LipSmacking #Business #Lunch with Surbhi Dewra, founder of CareerGuide.com (India’s biggest #online #career exploration portal) Joining us were 8 inquisitive #Entrepreneurs and together, we gobbled on the first-hand exclusive interaction with Surabhi. . A big shout out to @lovecolorbar for giving us the Perfect Pouts that shunned self-doubt. ?? And it’s hard not to mention the #Food Wonderland of #Hilton Jaipur that left our souls happy! ? . Stay tuned for the full story and business mantras!

We sat in the Krystal Bar of Hotel Hilton, and Surabhi did my quick career-analysis, first. Woohoo! Finally, I got hold of her with some ready-to-go questions.

Me: How did Careerguide happen for you?

Surabhi: I happen to be a girl from Hyderabad who became an Engineer by chance rather than by choice. I did my Electrical Engineering from BITS Pilani, but if you ask me to fix a bulb, I won’t be able to do it. When I was in Pilani, I realized that even being in one of the top five institutes of the country, I was feeling lost. What if there were many others around me who felt the same?

As a kid, every time someone asked me what profession I wanted to take up, I’d say ‘teacher.’ I was good with technology and could combine my passion with it in a lot of ways. And, that’s where the concept of Careerguide came in.

Me: Has your experience as a woman entrepreneur been any different from the journey of a man’s?

Surabhi: I think the learning for all the entrepreneurs is the same. The only difference, that men and women have to face, is that Indian women are given less exposure as compared to their brothers in the family. It’s hard for them to take decisions, there’s also an existing difference of support. A lot of families prefer saving up for their wedding receptions rather than for their careers.

I come from a Rajasthani Marwari family that was pretty conservative, too. The issue with our families is that they only begin showing their appreciation when the world is appreciating it. The good thing for me was that since education had always been a part of the mainstream in my family, things were not as difficult as they could’ve been. They respected and understood the power of education.

Me: Is there a quote that you live by?

Surabhi: It’s not exactly a quote, it’s a common line which holds utmost importance in my life, and that is, “Do what you love.”

When we’re in college and get placement calls, we always consider companies that offer us even about 50k. We end up only looking for the right kind of salary. I’d say don’t look into that. I’d say concentrate on the company, see in what direction the path will take you if nothing else! The initial salary isn’t everything.

Me: What is the enemy of passion, according to you?

Surabhi: I would say money, that’s the first thing that comes to my mind when you ask me what’s the enemy of passion!

Me: An incident that pushed you forward?

Surabhi: When I started in 2011, no one knew what a startup meant. As a woman entrepreneur, I had to show an extra level of dedication for people around me to believe that this is what I want to do. For me, the first two years were about proving myself, working on the ground level, telling everyone that it’s not a hobby for me, or a passport for an MBA in Stanford, this is what I want to do!

I landed in a reality TV show. I was talking about my business, pitching it to the investors. And, guess what, on the national television, I was rubbished & told that what I had on mind didn’t make sense.

For me, things turned around when a year later, the same investor came forward and invested money in my venture.

Me: A moment when you felt like giving up?

Surabhi: There have been quite a few, actually. But, what matters is how you snap out of these moments because they are seasonal, and need to be shooed away.

Me: 5 elements of being a successful entrepreneur?

Surabhi: I still don’t believe myself to be a successful entrepreneur, but these are the five things that helped me out:

Me: What’s your good luck charm?

Surabhi: I gotta say, my good luck charm has been always and only, “hard work.”

Me: One thing you stress-eat?

Me: What’s your guilty pleasure escape from work?

Surabhi: Anything that can relax me, especially visits to the spa.