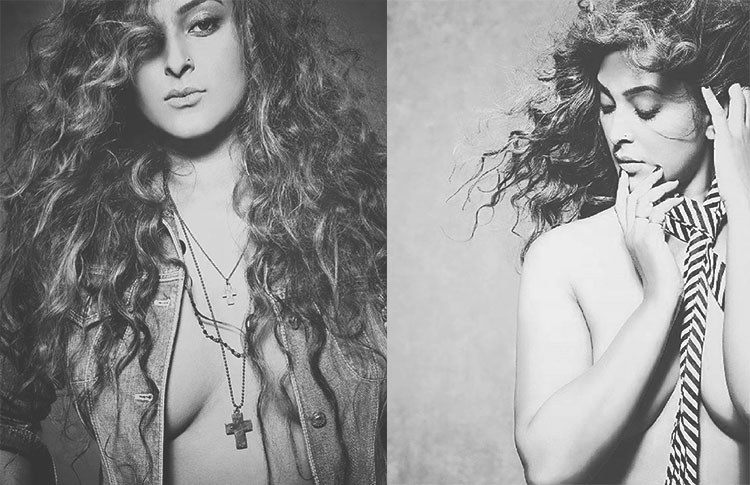 She was at the peak of her career- with successful modeling days behind her and a bright future which looked even more promising after she signed a three-film deal with Sanjay Leela Bhansali.

Remember the black haired girl who dazzled the silver screen with her supple and graceful moves alongside Hrithik Roshan in Guzarish? With her small yet substantial role, it was she who left an imprint on my memory and after some initial digging I found that she was an Indian supermodel, Monikangana Dutta, who had worked with designers such as Vivienne Westwood, Yoji Yamamoto, Christian Dior, Leonard and Chloe and walked the ramp at Paris Fashion Week, Milan Fashion Week, Indian Fashion Week and Australian Fashion Week. She is the only Indian supermodel to have walked for Victoria’s Secret.

And yet, she vanished for six years, after capturing the attention of masses with her performance. So, imagine my surprise at the news of her imminent comeback after six long years. Are you as intrigued as I was before my hour-long chat with the lady in question? Well, here you go!

Let’s start with the ‘Whys’ Monikangana. Why did you choose to be a model?

First of all, I know Monikangana is something of a mouthful, so call me Moni. So, I come from a family where education always plays a vital role. So, after I completed my 11th and 12th in an Army School, I went to Delhi. You see, it’s kinda a trend in my family that you complete your schooling in Guwahati and go for your higher studies to a metropolitan city.

So, one day in college, some foreigners were distributing pamphlets of some inter-college modeling contest. And I swore it wasn’t pre-planned but the moment I had that piece of paper in my hand I knew what I really wanted to be. I was 18-19 at the time and rest is history.

As you said, ‘education played a vital role’ in your family, how did you convince your parents?

Oh, that! Hah, it took 7-8 months to convince my father. First I had to make him understand what modeling actually meant, because he wasn’t aware that it was something one can build a career in, he had no clue. But once he did get a grasp on what I wanted to be, he was very supportive, never letting his aspirations be a hurdle to my dreams.

Well, you ended up being one terrific model but when did you decide to enter the film industry and why?

Actually, earlier I had been strongly against becoming an actor because I was a high-fashion model. It is very, very different from acting as one’s body language is different, the behavior is different. But film offers were coming to me, Bhansali sir even offered me a role much before he made Guzarish. It was impossible for me to commit as if I was done with the Paris Fashion Week, then I had to leave for Italy Fashion Week.

Honestly speaking, it all just happened, just like it did with me opting for modeling. I would say it was fate’s plan. Bhansali sir came with the script and I just said yes.

So, how was the experience of working on your first film?

It was an amazingly different experience to work with Bhansali sir. Everything was so picture perfect, you know. There was Aishwarya, there was Hrithik, I was working with Bhansali sir! It was all too good to be true. Meeting Kate Winslet wasn’t as exciting for me as was meeting these stars of Bollywood, that too as my co-stars… Oh, you can’t put that feeling into words.

And yet you left it all, to pursue your education even though you had signed a three-film deal with Sanjay Leela Bhansali.

I was going through an emotional and personal crisis in my life. All I could end up thinking was that my parents have always been my support, I was given everything without asking for it but what have I done for them? All they wanted from me was to go for higher education, give as much importance to education as they had. I finally decided to fulfill their wishes and was sent to LA to complete my studies.

You know sometimes it feels like I’ve lead two different lives that are so drastically different from each other. But I know some things in life are meant to be and it was one of those.

But weren’t you afraid that people will forget you in these years, did you try and stay in touch with the film industry?

I was in touch with myself for the first time and that was enough. As for people forgetting me, I wouldn’t have even thought of making a comeback if that had been the case. In these years, countless people have implored me to come back, praised my acting, encouraged me, and trusted me.

In these six years, I have become so much more human, more forgiving, more patient and aware than I was when I was on the top of my career.

So, what are you studying?

Well, I am doing my Honors in Physics. It is an online course, but there are certain classes that you have to personally attend in the university.

Physics! In this wide world of varied subjects, all you could pick was Physics?!

Is it me or are you talking about Physics as if it has been your biggest enemy? (I think my ‘Well, YEAH!!’ couldn’t have been louder) (she laughs)

Actually, I had always been good with numbers and calculations. So when I was looking at subjects, Physics just looked good enough for me to go for it. I know you must be thinking about how I mostly make spur of the moment decisions. I still sometimes am unable to think of Physics and me in one line.

Haha! So, any plans on taking this surprising combination forward?

I really have no idea as of now but I certainly have a brand new inclination towards science, the field where the mysteries are answered and where one can’t just be content with one answer. I want to explore more.

What about women role models in your life, is there someone who has inspired you?

Deepika Padukone for sure! She fought her depression and hats off to her, what she has she has achieved on her own- she is a self-made success. I have been there, going through that emotional brokenness and yet she picked herself up, went on and handled her career while going through her personal crisis.

She wasn’t afraid to face herself or the world, how many people even possess that kind of strength? Looking at her I was inspired to come back.

So, how do you envision your future in the industry?

I have done two web series, I’m Not A Pornstar Nazar Sambhal Ke directed by Jainendra Baxi and Baytakhol by Ayush Raina. I am also doing a big Hollywood TV series but as it is still in its initial stages, I can’t disclose much info about it. All I know that it is going to take a lot of hard work, because the first time I entered the industry, it felt very easy, everything was done smoothly. But now I will be starting it all over again, facing all the issues again and combating new troubles like the rampant culture of body shaming. Just the other day I was watching Vidya Balan’s interview where she was asked if she was planning on losing weight to get more ‘substantial roles.’

I mean first of all this question is demeaning no matter who is on the receiving end of the question and second, why just women in Bollywood have to adhere to the rules of beauty. Why is the measure of talent based on how fat, or thin or what my age is? Why can’t you accept us the way we are and judge us for our skills on the silver screen?