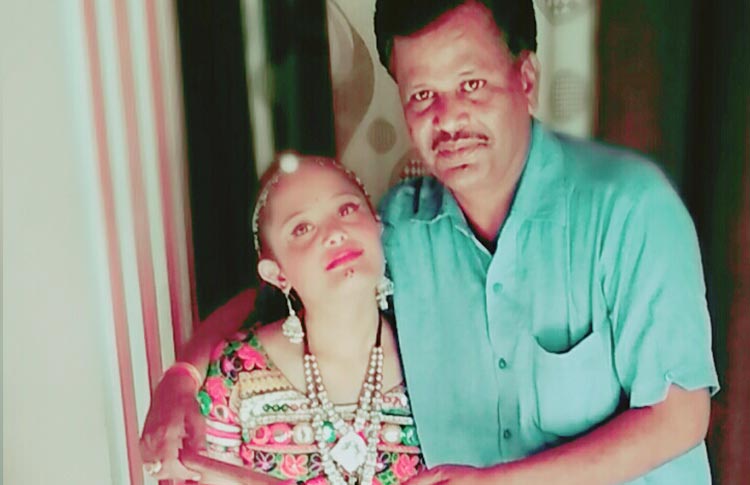 As a part of ‘Mind Your Head’ Campaign, IWB seeks and wishes to promote free dialogue on the various mental health issues that are stigmatized by the society. Menstruation and Developmental Disorders being the two topics that are believed to be better not touched.

Earlier menstruation was a big hush-hush in the society, and many women saw it as an ailment that they were disguised with. And though it is fortunate that the situation is seeing a change, there is still a long way to go in making people believe that it is just another bodily function.

You remember we talked to the Special Educator from Disha (a Resource Centre For Multiple Disabilities) regarding how they teach ‘Period Management’ to the specially-abled young women? We recently got in touch with one of the student’s mother, Sunita Khandelwal, too. She, in a heart-to-heart with IWB, opened up about the life-challenges of her 18-year-old daughter, Rani, who was born with down syndrome.

“We have two more children, but both her father’s and my life rests in her. Call it our luck or hers, I am glad that she was born in a loving and caring family.” Scroll on to learn more about Rani’s life and her mother’s genuine and loving concerns:

Tell us a little about Rani, what are the activities she enjoys the most?

Rani is a full-of-life and fun-loving child. There are days when she’d behave a little strange and upset, but that’s a rarity, usually she understands everything, and is very observant. Oh and, she finds interests in many things, but dance and drawing are her favorites. We have a joint family, and in a recent wedding, she even performed a dance with the other children. She also likes to help me in the kitchen work.

Oh, wow! With Diwali so close, how is she helping you in the preparations?

She’s my biggest help in the entire family. Mostly I don’t even have to ask her to give me a hand, on seeing me doing any work, she herself comes and starts working along. And yes, with Diwali around the corner, we have lots of cooking and sweet-making to do, she helps me with it every year.

And what about the Diwali dress, has she already selected one?

Ha-ha. Hasn’t until yet, but that is one thing that she never forgets. Her father runs a Saree Showroom, so her love for the traditional lehenga is catered well. On normal days also, he often brings her dresses from our store, and nothing makes her happier.

On observing my younger daughter, Ayushi, giving sketches for potential dress designs to her father, Rani would do the same, and say, “make my dress also like this drawing.” Owing to her habit of observing and grasping from her sister and brother, she has learnt a lot.

How sweet! How is her relationship with her siblings?

She loves them and they are also just as fond of her. My second daughter is 17 and son is 14, and though in the beginning, they used to feel that I love Rani more, but growing up, they understood the situation and took it very well. Both of them take good care of her, and whenever I send Rani out with Ayushi, she takes her along readily and gives her proper attention. And this is a very comforting realization for me as a mother. Rani recently went for Garba also with Ayushi and her friends.

That’s great. So what is her routine on any normal day like?

In the morning she goes to school, then comes back at around 1:30-2 in the afternoon, and after changing clothes and having lunch, she’d watch TV and rest for a while. And she does all of it by herself. Then in the evening, she either helps me in the daily chores or would go down to her Taiji- Chachi’s (Paternal Aunts) house, they both live in the same area as ours.

Okay! How helpful has her joining Disha been for you, and her?

Very, very helpful. I got to know about it from an acquaintance, and that year it was Rani’s 7th birthday. So she was a little late, but as they say better late than never, because it’s been ten years, and she’s not only learnt a lot, but it has also added a lot to her overall growth and development.

She recently gave Class Three examination, according to their special syllabus, and besides academics, is learning various other vocational activities, like sewing and drawing.

We learnt about Disha’s daily sessions on Sexual/Menstrual Education, how much have they helped Rani to understand her body processes?

Yes, I am aware. The educators there told us about it, and she too keeps talking about the many things she does in school. And I think, the way she deals with “time” and her period, has come from the learning imparted by them.

Have you also had discussions with her regarding menstruation?

Uhmmm, no. I had thought that I will talk to her when she reaches the age, but then it just happened. She shied, “I didn’t even know what to talk about and what exactly to tell her. It is a process that happens, that’s about it.”

On asking about whether she doesn’t find it important to talk about sexual health, she shared that she does communicate with Rani about safety issues and opposite gender, but she has to do it indirectly and often finds it confusing herself. Her words reflected a mother’s concern, but at the same time, also of our country’s stigma around sex-education.

Do you remember the first time she got her period? How did she take it?

Yes, she got her period six years ago, when she was 12-years-old. She felt a little odd and came and told me that she got her “time,” having picked that word from my conversation with my sister-in-laws, as I mentioned before, she is extremely sharp and observant. That month it passed, but the second time when she got, I just told her that like mumma she too will get it every month from now.

Now she’d sometimes contribute to our in-family ladies talk, saying “Mumma, Rani’s time is also to come.” But she remains mindful about not discussing it with anyone else otherwise.

So, how do you help her manage her cycle days? Have you been maintaining a diary or calendar for her?

No, nothing as such. She herself remains particular, and we never had to worry about it or anything related to it.

What about personal hygiene, how does she take care of pad changing, cleaning, and other things?

She handles all that very well. As you know, Disha teaches and trains them for it, and Rani being someone who learns really fast, absorbed all that she learnt.

She takes care of everything by herself. I just had to tell her of the basics, like where we keep the sanitary pads, how to wrap it in paper, and where to throw. Her cycle continues for 4-5 days, and during the day, she takes good care of her hygiene. Knows when to change, and if at all, my younger daughter might get stained, but Rani, never.

She’s a smart girl! But how do you go about keeping her unaffected from the taboos and stereotypes that surround mental health issues?

Yes, that’s forever been my concern. And more than keeping her away from the societal stereotypes, which we, fortunately, didn’t have to deal much with, given the family’s understanding and support, it is her safety and life ahead that often leave me bothered. I can’t keep her away from me because I constantly feel that she’d need me, but I have to be wary of time, for if it is in destiny, there might come a day when she’d meet an understanding life partner. So nowadays I do leave her at home for a while, or send her with her sister sometimes, for her to get used to of being without me. Marriage or not, but a mother’s heart always only wants the best for her daughter.