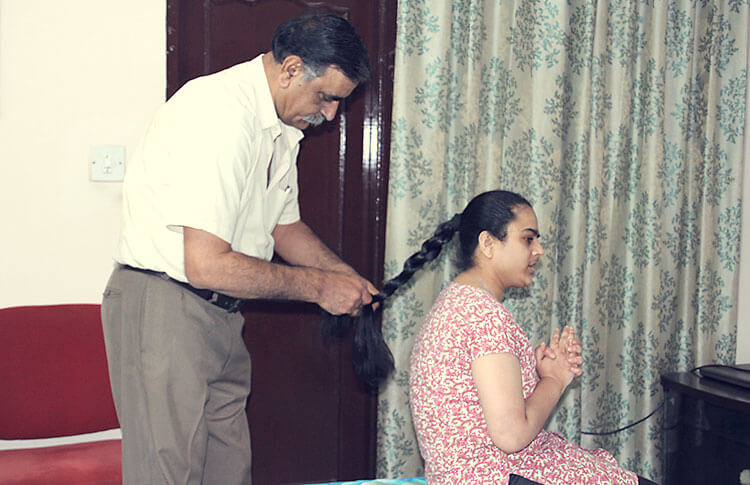 “She is my Angel,” was the first thing Colonel Anand Prakash said when I asked him to tell me about his daughter, Kanika.

As part of the Special Daddy campaign, I reached out to few Jaipur fathers to explore their relationship with their special child.

Kanika Sharma, Colonel Prakash’s eldest daughter, is a 30-year-old autistic girl, who suffered a minimal brain disorder at the time of her birth. She was born as a subnormal child, and as a result of her medical condition witnessed delayed milestones in life. Kanika studies in Umang School for Special Kids,

“Her motor skills were delayed, but she had a flair for reading and writing. She was excellent at dictation and had a beautiful penmanship, both in Hindi and English,” her mother recalled as I turned on the recorder and prepared to begin the interview.

I was just beginning to wonder, why all this was being said in past tense, and next came the answer to my unarticulated question. (I suppose they read my mind.)

“The year 2005 was a turning point in Kanika’s life, which changed everything,” the father couldn’t continue talking anymore.

“She is very attached to him,” intervened the mother, “Her behavior totally changed in that year, and we just couldn’t figure out what was wrong. She would sit in the balcony and console herself by saying “Papa aate hi honge…” until the day she slipped into depression. For more than two years she was off. And because of what she missed in life during that duration, she stayed offset ever since. We sought psychiatric help, and a doctor tells us that she still hasn’t been able to reconcile with the fact that her father has come back in her life and will not leave her. He has given up most of his career postings just to be with her.”

Father: “Her span of attention is very poor, which has resulted in her losing interest in life. You see, to be interested, you have got to be in continuation with the previous thought. She doesn’t have that kind of connect.”

In the middle of our chat, Kanika got a bit cranky, to which her father responded with endearment “Beta, please don’t be angry. Come let us make some tea for Priya.”

And off they went into the kitchen, where I followed them with our photographer, to catch a glimpse of their rapport. Even though I am not a tea-person, I wouldn’t have missed this tea for the world!

“Kanika, five spoons of sugar. Come on! Count with me.” And she obliged. But every 2 minutes, she would leave the task at hand and come back and sit on the couch. Uncle kept coming after her to guide and goad her into finishing the process.

We were all seated again in their drawing room.

Walls of the room were adorned with plenty of pictures of Kanika and her younger sister, Kritika, who is a Lieutenant in the Navy. Looking at one of these pictures, I asked, how she is with her sister?

“She doesn’t take nonsense from Kritika. If Kritika does something she doesn’t approve, she knows as an elder sister what she can check her for,” said Colonel in a humored tone. “Kritika, don’t use abuses!” came Aunty’s voice from the backdrop as she imitated her elder daughter, and we all giggled!

What has Kanika taught you, Uncle?

She has taught me the virtue of patience. The most important lesson that I have learned in life is that patience is what sees you through the difficult situations. I owe it to her. When she was 16, the normal schools refused to accept her. I ran from pillar to post to convince the authorities to admit her in their school. But they denied! That is when we put her in a special school. That broke both her mother and me. Regression also took place in special schools. She learnt many things from others which are not supposed to be learnt. Even now I am fully aware of the fact that if she is kept in the normal school, she will behave more normally.

I did notice the gleaming eyes of Uncle and Aunty. So I tried to launch a light- hearted question.

So, is she a Daddy’s girl or a Mommy’s girl?

Undoubtedly, Daddy’s girl! – Said the mother. Once she went into a coma, and wasn’t with us for seven days. The doctors had given up hope. But she returned miraculously, and guess what her first words were? “Where is Papa?”

Every day in the morning he wakes her, “Angel, get up!” And she’ll get up happy and smiling. Someone else dares to try and wakes her, and they’ll witness her tantrums!

How would you describe your relationship with her, Uncle?

Our relationship is like that of a devotee and God, with both of us swapping roles invariably. Whatever I do for her I take it as a service, and she submits herself entirely to me. I lost my mother at a young age of 17. There is nothing I could do for her. Probably God has given me back my mother to look after.

Amongst all this, he told us about the instance wherein his wife was outstation for a week, and he took care of Kanika all by himself. “She has an equation with me that I have not deliberately induced. If I’m doing something extra, I don’t feel ashamed. I am doing it for my child who needs help. And I can do anything for her – from giving her bath to dressing her up,” Uncle said.

“He even braids her hair for school,” tells aunty excitedly. Let us have a look at that, shall we? I requested gleefully.

And once again we left the drawing room and went to the dressing area where Uncle braided Kanika’s long beautiful hair.

And he did it with quite a dexterity, I should say! He also pinned her out-of-the-way hair, as if braiding wasn’t a great feat in itself! You may see for yourself what we witnessed…

Uncle continued: There are many relatives of mine who have obliquely suggested that I have spoiled my life by taking care of Kanika. They tell me that I could have put her in a mental asylum long time back and could have been happy in my life. They say, on doing so I would have materially been happier. But they don’t know happiness comes from a complete package. My family, as well as my happiness, is incomplete by anyone of them missing from the package.

I’m sure this may come off as a difficult question. But do you mind telling me your thoughts for her future?

Future? That is a very big question, Bete. I’ll look after her for as long as I am alive. After her mother and me, I believe there would be my younger daughter to take care of her. But, God forbids, if she cannot, there would be somebody in the world who would take care. Because I would leave behind enough money in the form of a trust, such that whosever takes care of her will get the due. When I am not there, Kanika will still get a pension, 50 to 20 thousand rupees per month plus whatever money I leave, maybe a couple of lakhs, plus interest, should be enough to keep someone’s interest alive. I can support the whole family of a poor person, only on the premise that once we are gone, they will take care of her. Her sister Kritika has been put as a legal heir to her and the Navy also will look after her interest. I will put Kritika as the executor of my will.

My message to them is that please take it as a blessing that you have been given this chance to serve, otherwise in this bad wide world, you don’t have many opportunities left to do good. God has given you a recipient who will never cheat you. This relationship between you and your special child is a pure unconditional transaction of love, with no selfish motives.

I would be lying if I said that after this conversation I wasn’t emotionally moved. As I took my purse to leave and bade goodbye, both Uncle and Aunty kept their hand on my head and blessed me. To my surprise, Kanika reached out and enveloped me in a hug.

I left the house, but the sense of overwhelming endearment between Uncle and Kanika that I witnessed there, will stay with me.