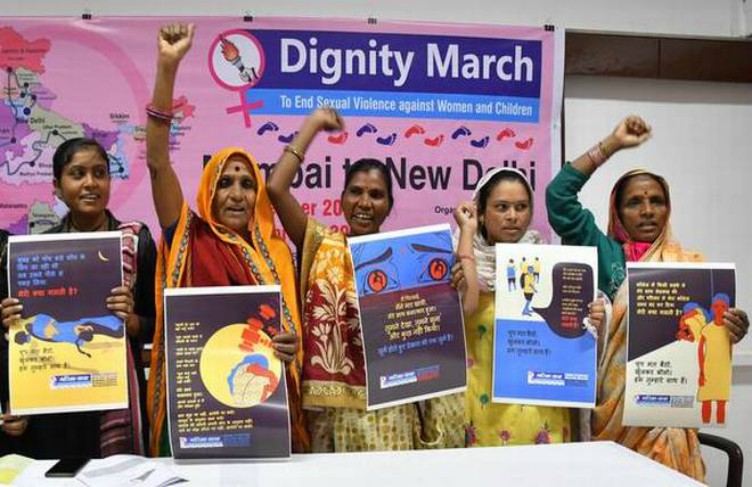 A recent survey by Rashtriya Garima Abhiyan came up with some really disturbing statistics. It was found that 95 percent of the cases of sexual violence against women and children still go unreported in the country.

Ashif Shaikh, convenor at Rashtriya Garima Abhiyan, shared, “We found out that most women don’t end up reporting sexual violence because they don’t receive support from their families and friends and because they fear social stigma.”

To add to it, out of the 1,150 people who shared that they had been sexually assaulted, 78 percent were minors when the incidents took place and in 64 percent of those cases, the abuser was a known to the victim.

In response to the shocking findings of the survey and to create awareness about the stigma faced by the survivors that forces them to stay quiet, a ‘Dignity March’ has been planned, for which approximately 5000 survivors have come together.

Organised by the Rashtriya Garima Abhiyan, the 65-day-march will see sexual violence survivors cover a distance of 10,000 km across 24 states in the country along with their families.

Speaking about the march, Shaikh shared, “We want the survivors to talk to people in these cities, share their stories in the hope of helping people open up about their experience, and even initiate legal action if necessary.”

Women like Bhanwari Devi, Urmila Devi, and Janki Bai, whose cases made it big to the country’s news scene as they decided to fight for justice, are all set to participate in the march. Bhanwari Devi, the woman hailed as the mother of India’s #MeToo movement by many and the reason behind the formation of the Vishakha Guidelines, has struggled all her life to see her rapists punished. Through the march, she wants to create awareness about the social stigma that a survivor of sexual violence has to face in India.

Devi said, “The key purpose of this yatra is that we want people to listen to us. We want justice and for that we will shake everyone (authorities) up till we receive our justice.”