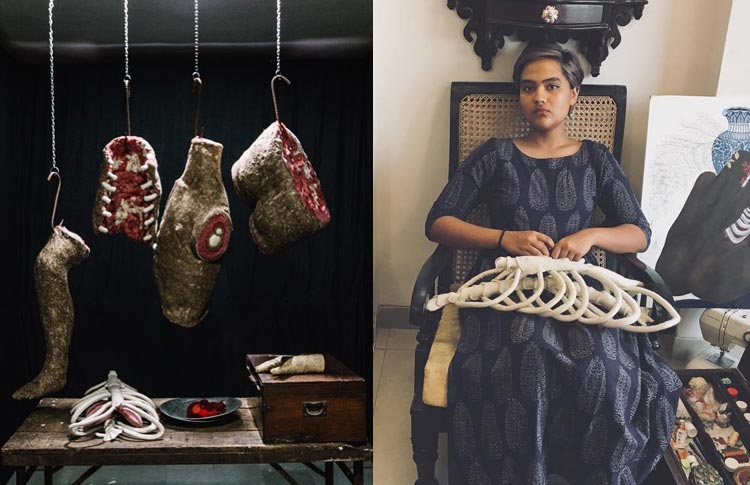 Sarah Naqvi’s artwork is replete with meaning and purpose, right from the ideation to execution to the exhibition.

The elaborate and vivid details are curated first for the conscience and then for the senses. It is the kind of artwork that aggravates your soul and flames a desire to dig deeper and find out why? Like she herself asserts, I want to engage people in an entire conversation and not just look at my art and enjoy the visual.”

Her latest series, Bashaoor 2018, follows the same line of thought and purpose. The timeline of the project follows the current issues and what’s happening in the country with all the myriad shades of communal violence festering like a fatal wound. Sarah shares, “It follows my journey as a part of a Muslim family.” However, she has curated it in a way that it is not just limited to herself but transcends to a bigger level.

She explains, “It is a reflective sort of journey, that addresses my struggles as a Muslim and how my religious identity has imprinted upon me as a person. It is also the journey of my acceptance of my Muslim identity.”

A communal undertone runs through the series. She points out that ever since the Ayodhya riots, a sort of communal hatred has stayed in the air, which time and again manifests itself, sometimes subtly, sometimes vehemently.

“But nobody recognizes how big a problem it is and even if they do, nobody is vocal about it until it’s impacting them personally,” says Sarah. “It is like they will remain indifferent regardless of who is dying. Someone is dying cause of their dietary preferences, and somehow we will maintain an indifferent stance. I mean it’s not really a democracy if people are killed based on their religious faith, right,” questions Sarah. It is this exasperation that finds a way in Bashaoor 2018.

The understanding of the Muslim identity in India is largely based on a Western narrative, pertaining to which all of us have certain stereotypes. Sarah explains, “It is like a Muslim is always looked at through a filter where their entire existence is narrowed down to a religious identity. But how fair is limiting a person to just a name?”

She adds, “All of this has reflected on my journey as Muslim, making it very difficult to live in this identity. This is something that I have dealt with since childhood. This is why I always had apprehensions in being publically identified as a Muslim.”

She goes on, “I went to a convent school where I had to face a lot of bullying. Every time there was a terrorist attack, I’d become an easy target for the rest. This is when I started concealing my identity. I was young and avoiding the attention that I didn’t want. Even as a kid you don’t want that chaos.”

It was only after joining her college that the thought that she was pushing away her own cultural heritage dawned upon Sarah. She shares, “I was finally in a space where I got to interact with people from all cultures and religions who were all very proud of their roots. And then it was me, constantly pushing my culture away because of all the stigma.”

She adds, “That is when I decided that I am going to take these myths and try to understand my phobia of religion and de-myth the stigma and understand on a personal level what it takes to be a Muslim and also a “good Muslim.” Because that is what we are constantly told that doing so and so will make you a good Muslim or a good Hindu. But who decides it anyway? Isn’t faith something very personal, something that keeps you grounded?”

Bashaoor also is a journey of Sarah’s understanding of her own religion and resisting the common belief that Islam is oppressive. She says, “It is not. I read up about it just to find out where this thought is coming from. I realised that there is a context for everything. If a woman chooses something it is her right. Nothing is forced upon anyone. The more time I spend on  Bashaoor the more I understand my journey, my struggle.”

The first installation of Bashaoor series is a meat installation. I couldn’t do without finding out the underlying ideology. Sarah told me that the installation was a result of her meditations on all the recent incidents of lynchings. “I wanted to find out where is all this hostility coming from,” she explains, adding, “It is my response to multiple lynchings on the mere assumption that someone was consuming beef.”

The technique that goes into the making Sarah’s artwork, the underlying thought behind the selection of that technique and the way it is executed, are all as profound as the message that they bring out. For instance, the meat sculpture has been created with the fabric which was sourced from Ahmedabad, which has a history of communal violence. The fabric has been dyed in Jamalpur, which for some reason, is called Little Pakistan.

“I think such little details build character and add to the narrative. It’s like the material adds to the larger picture, the bigger story. Everything here has a purpose. I am also trying to travel and document stories of loss and violence,” reflects Sarah.

She adds, “The piece is made up of wool. Wool is something that is soft, warm and gives you a sense of comfort and security.”  However, in Sarh’s installation, it completely defies its purpose. As she says, “The sight defies what it stands for. It is like a visual compilation of what is happening around us.”

For another triptych of the Bashoor series, Sarah has employed the technique of Mata ni pachedi. Explaining the thought behind, she explains, “It is basically Kalamkari, the art of making hand-painted textile using a kalam. The craft comes from a history of exclusion and conflict. This textile, that tells the stories of the mother Goddess, is created by a community which was barred from entering the local temples. Thus it has been used as a mobile temple cloth for them.”

This is the point of the narrative which unites it with Sarah’s mother’s history of exclusion who was living in Dombivali, a predominantly Hindu locality, at the time of Mumbai riots of 1993.  At that time, she was pregnant with Sarah’s elder sister, thus adding to her vulnerability.

Sarah writes, “When the riots broke out, my mother felt vulnerability like never before and questioned birthing a child into this world full of uncertainty and divide. She often wore bindis and sarees while stepping out and took off the nameplate on her door. This is her story.”

Sarah has attempted to narrate that entire story through this triptych. “I want to share what violence does to an entire generation. How loyal friends become enemies and how fear can change everything,” she says.

Just like all her creations, this one has layers of meaning too. She shares, “The artisans that I worked with had their own stories to share. It was like my documentation of my mom’s story in a household that documents the mother goddess.”

It is an attempt to bring out how they could all relate on a congenial level, despite the differences in their religions, cultures and premises of the stories. “My aim is to portray how communal hatred is a political tactic to divide us all. A normal layman like us would never do it,” says Sarah.

Her artwork operates on a physiological level more than an aesthetic one. For her, the purpose of art transcends beyond the aesthetics. She explains, “For me, aesthetics are not just limited to the visual aspect, they are rooted in making the work impactful. The other day, I was reading about “Peak shift,” one of the 10 aesthetic principals which states that the more exaggerated the visual the more it would stimulate the mind.” This is what Sarah aspires to do. She wants you to look and be impacted by something that you are not used to seeing.

She says, “What I intend to do is not just appealing but also visually impactful. I want it to make you feel something. To make you ask questions.”

Well, I asked quite a few questions, perhaps she is hitting all the right notes!