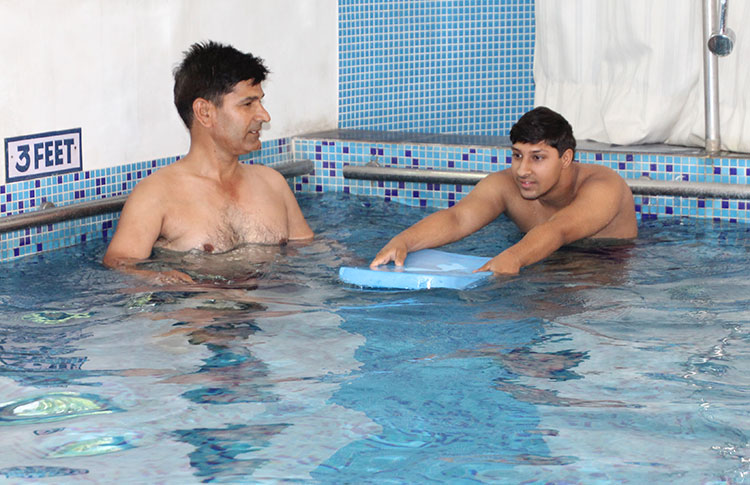 I visited Disha School for Special Kids, as a part of my mission to cover the beautiful bond between a father and his special child. As I entered the reception, feeling regretful for being a bit late, I noticed Nisha Ma’am, the psychologist I chatted with a few days back. She glanced behind me at the father and son duo seated close to the door, and proudly said “This is Ankit’s father. His workplace is 45 kms from Jaipur, but he never denies coming whenever we call him. He is very cooperative and is willing to sacrifice his office hours, but not Ankit’s needs and desires.”

That is how I first met Mr. Sanwarmal Sharma, a VMS Doctor in Kaladhera district, Jaipur. A kind and humble man by nature, he is the Special Daddy of Ankit, a 14-year old enduring Microcephaly, a neurodevelopment disorder.

“This used to be my class,” murmured Ankit as we approached a classroom.

“When Ankit was about 6 months old, his face was very small, just like that of a monkey’s kid. Initially, we showed him to a doctor, who took the matter lightly and said that he will be just fine. About two years later, we consulted some neurosurgeons. They told us we are late. A child’s brain develops till the age of 2 years. Had we come a bit early, they could have operated and Ankit’s brain would have developed like that of a normal child,” said Mr. Sharma.

I must admit. I became sad on hearing this. I looked at him thinking how disheartening this news must have been for him. But he did not display even a freckle of disappointment. He proudly said, “Ankit is God’s gift to me!” “Jaisa bhi hai, badiya hai, iske saath mehnat karni hai,” was his exact words.

Let me tell you, that his statement came off as a surprise to me. There are parents out there who shy away from their child’s disability, but here I was interviewing an exceptional father who cheerfully embraced his son, despite his condition.

We used to live in a village, and we sent him to a small school for 4-5 years but he couldn’t learn a thing. Then a friend of mine told me about Special Schools. That is when we moved to Jaipur. I enquired about various Special Schools, and found Disha School to be the best for Ankit. We admitted him here in the year 2008, and have been living in a 2 bedroom house in Jhotwara, ever since.

So, how has his progress been in this school?

Here, he has been participating in various dance competitions and stage shows. The faculty has worked hard with him and we have received good results. His sports teacher, Kesar Aram, once told me that he can be a good swimmer. So I started taking him to a nearby pool.

Even after being a hard-working village doctor, and the only earning hand in the family, Mr. Sharma took the time out to learn to swim, just so he could teach his son, Ankit.

Well, that is how I initially came to know about you, Uncle. I think it is absolutely wonderful what you’re doing!

It is just the opposite actually! He chuckles. The normal kids in that pool used to make fun of him. One day, to motivate him, I got down in the pool. This became a regular practice. With him, even I learned swimming. And today, it is our favorite activity we do together.

He continued, “Every morning, I take him for swimming for one and a half hour. This has been the most important part of my schedule since the past 4 years. In winters, I indulge him in racing, skating, cycling. I rotate his activities according to the seasons. He has bagged a Gold medal and two Bronze medals in Swimming National Championship in Karnataka. My target is to send him for Special Olympics. He almost got selected this year, but they stroke him out after 2 rounds. The authorities haven’t been able to give any satisfactory reason. I have taken action, and am keeping my hopes high.

May the odds be in your favor! I felt so glad to be sitting beside an Olympic level swimmer, who was at the moment, very quiet. Hmmm. I am soon going to do something about that!

I further asked: If they do not select him, what have you thought ahead for his future?

I will prepare him for 2019 Olympics! That’s the spirit! I rejoiced at once! He continued, “Till the age of 20-22, if he is able to discover a field for himself through this school that will be great! Otherwise I’ll look for a private job for him.”

I randomly asked Uncle about Ankit’s birthday. This time, to my good fortune, Ankit decided to respond to my interrogation, and replied… 29.11. 2001

And I high-fived him, in more of what seemed like a reflex action! Even I was born on the 29th of November, a few years before you, well.

So Uncle, tell me about the relationship between you two. What have you learned from him?

We are like friends. I share everything with him. I take him everywhere with me. I don’t bother as to what the society has to say. He is my best friend and I am his. I don’t force him too much for anything. He does what he likes. Talking of what I’ve learned from him, well, majorly, it is to stay fit. *Laughs* Because of him I am more active health-wise.

“You know, he is very fond of acting,” continues Mr. Sanwarmal. “Many a times, he would stand in front of the mirror, and imitate Bollywood actors. Salman Khan is his favorite!”

I’m sure it must be an entertainment for all of you at home watching his “Dabangg” style. And we laughed.

On hearing so much about him, to be honest, I was eager to see for myself his special talent!  So we decided to go to the swimming pool, where both Uncle and Ankit got down, and displayed some super cool swimming techniques. Back strokes, front strokes, freestyle, you name it and they did it!

“Kick ahead! Faster! Turn around!” the father kept motivating and the son kept obliging!

It was a feast for the eyes watching both of them swimming in perfect coordination with such suave moves! We tried to capture the beauty of this duo’s relationship through our camera, but obviously it is far more than what any gadget could express. What do you all think?

After they were both all dried up, and before I took my leave, I couldn’t resist asking for his message to all other fathers.

My only advice is that all the fathers should support their children, and that is exactly what I am doing. If these children are well supported, they will go far ahead, and will have a better chance in life. Back in my village, I motivated a lot of other parents with special kids to seek the help of Special Schools, but due to poor financial conditions, and lack of these institutions in the villages, they are unable to rightly treat their children.

One thing that I noticed throughout my conversation with Mr. Sharma was that he never displayed any sign of sadness or remorse. Rather, whatever he spoke, he spoke with utter fondness and love.

They were in a pool of measurable depth, but from what I saw, they were swimming together in an unfathomable ocean of pure love and respect for each other which were far too immense for any hurdle, any disability.