Sanjeeta Bhattacharya On Marriage Proposals From Fans, #MeToo And Freedom In Music 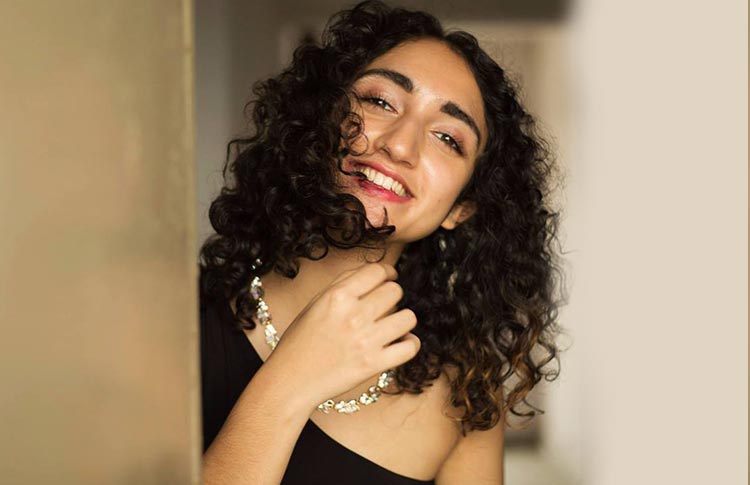 Sanjeeta Bhattacharya is the wild of her locks, the calm of her voice and everything in between. If you have ever listened to her singing you’d understand exactly what I mean when I say her voice has a refreshing crisp which satiates the hunger of your soul.

Sanjeeta is a fine mix of classic and contemporary. She has been formally trained in Hindustani Classical music and Kathak and has also been trained in western music at Berklee College of Music. “Life is not too different from music,” says the 22-year-old who is clearly wise beyond her years. She is exploring various genres of music as she aspires to soak in all the sounds that the world has to offer.

Sanjeeta is a fine mix of classic and contemporary.

Sanjeeta thrives on traveling and that explains the name of her upcoming EP (extended play), “Yatra”. As you listen to her voice it cascades through your soul and leaves you happy and light.

‘”You’re the only one who can be the best you,” says the young singer and her music testifies it. Her song “Keep Doing you” ft. Kaushik Manikandan is all about choices as she asserts “no one can tell you what to do.” Here is the full video of the song:

A song i wrote as a reminder that ‘”you’re the only one who can be the best you” 🙂 Performed as part of a DIY rooftop session. Vocals : Sanjeeta Bhattacharya Guitars : Kaushik Manikandan Videography : Melbin Joseph

Read excerpts from the interview:

How has Indian culture inspired you as an artist?

I grew up learning Indian classical music and Kathak both. I went abroad just to study western music but my musical roots lie in India and all my compositions have Indian inflections.

It is India where Sanjeeta’s aesthetic roots lie and all her works have Indian inflections.

Both Hindustani music and jazz have rich music traditions. How do you explore and shuffle the two? How do you reinvent these traditions?

Jazz, which has its roots in the blues and originated in the African-American communities, has room for improvisation and same is the case with Classical Indian music. Just like in Jazz music there is a head of the song and you improvise on the body, similarly, there are ‘stahi’ and ‘antara’ in Indian classical music. Of course, the two are stylistically different though. For me, it is more like an exploratory journey and I am trying to explore lots of genres and not just these two. I want to explore all the sounds that the world has to offer.

Talking about that, please tell me how many genres have you already explored?

So I have explored Balkan music when I was in college. When in Spain I dabbled in Flamenco and of course, I have learned a lot of Indian classical and Jazz and some of the Latin music too. My music has influences from all these genres and even my upcoming EP ‘Yatra’ will bring out the same idea of diversity language-wise.

Sanjeeta wants to explore all the sounds that the world has to offer.

Oh yes, I read that it will incorporate three languages including English, Spanish, and Bengali.

It’s for now (giggles). I have also added French to it now.

How does freedom find a voice through your music?

Freedom finds a voice through all kinds of music and not just mine. If you think of the Bollywood music the forties and fifties, and even Bob Dylan’s music for that matter, you will find their music was very relevant to the reality. But somewhere as time progressed we resorted to rainbows, heartbreaks, and fluff and I believe that music should not be an escape from the reality. It should be an affirmation of the truth.

Songwriting and dance are two different languages. Which among the two is the language of your soul?

Oh, that’s very hard. There is this one thing though while dancing I couldn’t express myself as well as music lets me do. In dance, it was always about Radhika, Krishna or some other fictional character and even if I could relate I could not express it as freely. Music has given me the freedom to put my own words to it. So ya, I choose music out of the two.

Which would be one of the songs that you think is perfect for you to dance?

Okay, let’s make it semi-classical then.

Oh better (Laughs). I am writing a song in Bangla called “Maa”. It has Indian inflections and I think it would just be perfect for a semi-classical dance routine. The song is yet to be released and it is going to be a surprise.

Are you still pursuing your dance passions?

I am not. I tried to as I went to my Guruji this Gurupurnima but it did not work out as I didn’t get the time. I do dance at parties though.

And just in case you were doubting that here is a video of Sanjeeta dancing like there is no tomorrow:

437 Likes, 49 Comments – Sanjeeta Bhattacharya (@sanjeeta11) on Instagram: “Sometimes you are really lit and you gotta let it out. #dancewiththegroom #taregingin #nutsicles…”

You have a saree named after you. What was the experience like?

Oh yes. Ecoloom is the name of the brand. The company is run by Sunanda Agrawal and her husband. She contacted me and told me that they wanted to showcase their sarees on women excelling in their fields and I got on board. Next day when I woke up I saw that they have actually named it after me. It was so cool! I don’t know how to tie one though.

Okay, so while most of them are nice, lately, I have been receiving some marriage proposals. Recently a guy messaged asking me to marry him. He wrote ‘Please marry me, I am going to be the best life partner and will support your music career.’ I was like, Bro I don’t need your support I am doing quite fine on my own.’

Who is your music icon?

So many. I can tell you who I am listening to right now. Elis Regina and Billie Holiday are my current favorites. Honestly, I find live music more enchanting than recorded music.

What are your non-music passions?

Dancing is there and I also love to travel. Recently I went to Pushkar, Kasaul, and Tosh. I love that feeling of going off for 3-4 days as it takes my mind off the city. Travel photography is also one of my passions and it was my dream to become a travel photographer when I was in school.

How has traveling enriched you as an artist?

There is a reason why my upcoming EP is called ‘Yatra’. I won’t say I have traveled extensively to all the exotic places but yes whatever I have seen in 22 years has its imprints on me. It is like you go to Jaisalmer and meet a child name Khushba on a random road and she is not there anymore the next time you visit the place. You go to Tenerife in Spain and eat Fish, and in Panama, you see how freely they dance.

I think I can connect. You mean that every place has a certain quality like none other, right?

Yeess! Exactly that! It is like you go to a place for a few days, you don’t have to change anything about it but it changes and enriches you as a person and you don’t even realize it. Ever noticed how the sky looks different in all the different places?

Sanjeeta says that the sky looks different in different places.

Do you have any plans for Bollywood?

I have never really planned anything in my life. If the opportunity comes, of course, I would take it. It would not be my priority though, in the sense that I would never move to Bombay to pursue it.

A song from some other artist that you relate to?

Again I can tell you which song I can relate to right now which is “Who’s Lovin’ You” by Jackson 5.

What’s your take on the current Bollywood item number trend with the crass lyrics?

I myself want to know why is it not stopping already. These songs are like an anesthesia, as in they numb you. If you are listening to these songs you are too drunk or have to lack any taste in music whatsoever or have a life so boring that you resort to these nonsensical songs. These kind of songs are not art, they are made just for the business and this should be criminal.

Tell me about your struggles as an artist.

Honestly, I did not have to go through any struggles. My dad’s an artist and thus he easily understood my vibe. Even after my return from Berklee, it wasn’t a struggle to connect with all the musicians in the city and every single day since then I have met so many versatile artists from different fields, for instance, bloggers like you. Being an artist is such a blessing.

Sanjeeta finds it a blessing to be an artist.

Do you have a #MeToo story?

There are times when people come too close and try to grab you or say things like Hey baby! My reply to them always goes like I am not your baby, I have a name and you should call me by it.

No, luckily I haven’t been through something extreme though. But I really applaud the women who came forward and raised a voice.

There was this one gig in Berklee in October 2014 at Boston Symphony Hall. It was a tribute to A.R. Rahman. We invested a lot of time in the rehearsals, it was a huge process and we all became one family during the process. On the day of the gig, the hall was jam-packed with 2500 people. We were a group of around 100 musicians and the response was incredible. Even now I get recognized for the same as the videos from the gig went viral. The energy that day was just ethereal and I will never forget that evening.