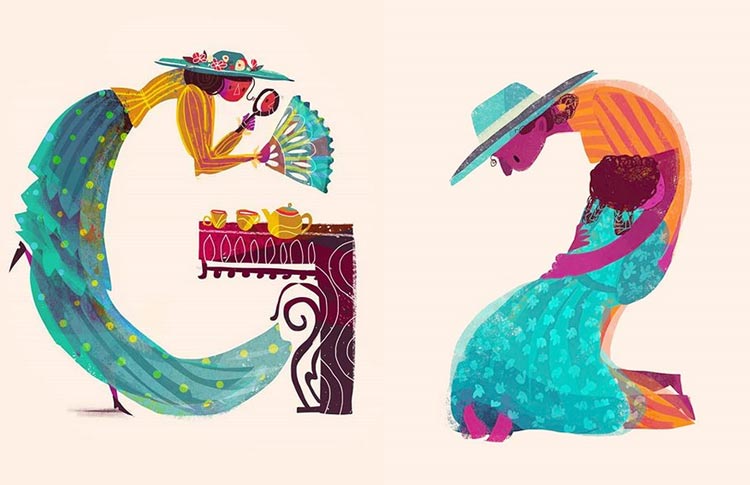 Are you following the ‘365 Days of Type’ campaign on Instagram which invites Illustrators, Designers and Graphic Artists to express their views on a particular alphabet or number every day? The creative online campaign has become a major fad among young artists from all over the world who are using their imagination for storytelling.

One such Indian artist is Sandhya Prabhat, an Independent Animator & Illustrator from Chennai. The young talent is particularly focusing on the women in fiction from her favorite books and turning them into dramatic and eye-catching numbers and alphabets.

685 Likes, 11 Comments – Sandhya Prabhat (@sandhyaprabhat) on Instagram: “Y for Ygritte the ‘A Song Of Ice And Fire’ by George R R Martin, for Female Characters in…”

748 Likes, 5 Comments – Sandhya Prabhat (@sandhyaprabhat) on Instagram: “V for Viola from ‘The Twelfth Night’ or ‘What You Will” by William Shakespeare, for Female…”

IWB spoke to Sandhya in detail about her involvement in #365DaysOfType campaign. Excerpts below:

For those of us who don’t know much about you, introduce yourself.

I am from Chennai. I pursued Bachelor of Arts degree in English Literature from Stella Maris College, Chennai. After this, I went on to do my Masters of Fine Arts degree from NYU Tisch School of the Arts in Animation and Digital Arts. Since then, for the last six years or so, I’ve been working as an independent animator and illustrator. I’ve recently moved to California.

So that means you’ve never been associated with any company as a full-time employee.

That’s right. I wasn’t ever in a full-time job, and that’s why I can’t compare being independent with being employed permanently.

What influences you the most?

Ah, that explains why an adorable elephant is enjoying a rickshaw ride on your website’s homepage. On this note, share the details of the tools you use.

I work professionally, primarily digitally. I use a drawing tablet and create digital illustrations and animations. These are easier to edit and faster to produce, especially when it comes to tight work deadlines than traditional media. Though, I experiment with traditional media for personal projects.

Is there any interesting story behind the first female character that you drew?

I love Alice in Wonderland by Lewis Carroll. I have drawn many scenes and illustrated many lines from the book that I find endlessly amusing. Naturally, I was really thrilled to draw A for Alice. It gave me the momentum to move ahead with the rest of the series.

785 Likes, 21 Comments – Sandhya Prabhat (@sandhyaprabhat) on Instagram: “A for Alice, Alice in Wonderland : I am doing @36daysoftype this year themed Female Literary…”

What kind of research did you do before the series?

I can’t say I did much research. I, in fact, did a lot of reading and re-reading during this time. But most of all, I engaged in exciting conversations with peer artists, friends, family and Instagram followers about literature and characters they loved. There were times when I asked my Insta-family to guess which character would come up next on my timeline. I remember, for number 6, I was lost and the Insta-audience helped me find an inspiration.

611 Likes, 6 Comments – Sandhya Prabhat (@sandhyaprabhat) on Instagram: “4 : Meg, Beth, Jo and Amy from ‘The Little Women” by Louissa May Alcott for Female Characters in…”

That’s amazing! I’m sure it’s a difficult process overall that needs a lot of brainstorming. What’s the average time you take to draw one character?

There have been times when I’d draw ahead of time, but most of the time it has been a hush-hush affair. I remember drawing after my usual work deadlines so I’d be cutting it close. Sometimes I used this as my warm-up sketch for the day.

“Miss Eliza Bennet,” said Miss Bingley, “despises cards. She is a great reader, and has no pleasure in anything else.” “I deserve neither such praise nor such censure,” cried Elizabeth; “I am not a great reader, and I have pleasure in many things.” . . E for Elizabeth Bennet, Pride and Prejudice by Jane Austen. #36DaysofType #36days_E @36daysoftype . . . . . . . . . . . #36daysoftype05 #art🎨 #alphabet #letters #type #typography #photoshop #illustrationartists #illustration #graphicdesign #mrsdalloway #virginiawoolf #bookstagram #instabooks #fiction #characterdesign #digitalart #typographyinspired #designspiration #thedesigntip #graphicdesigncentral #artofinstagram #designspiration #bookstagram #feminism #litdrawingseries #childrensillustration #best_of_illustrations #simplecooldesign

Actually, zeroing in on the character for the day often took longer than drawing the character. The drawing would sometimes take only a few minutes with a well-formed idea and sometimes much longer with a design that would develop only as I drew it.

I’m sure you ended up reading many new books. Name some of your favorites and describe what inspired you about their women protagonists.

I made notes of new books but did not end up reading all of them. There was no time, to be honest. For example, the book for number 3 was called ‘The Help” by Kathryn Stockett.

Z for Zixi is from ‘Queen Zixi of Ix’ by Frank Baum and X for Xayide the Witch is from ‘The Neverending Story’ by Michael Ende, and 6 for 6 female characters is from ‘Ladies Coupe’ by Anita Nair. These three are from suggestions by various people I spoke to during the series. I hope to read them once the series is done.

Were you always a book-lover or has the series made you one?

I was always one.

Do you know Sandhya once made an animation film called ‘Deadline’ in 2011 that was screened internationally? Watch it here: