Rudrani, Who Plays A Transwoman In Vikas’ Cannes Debut, Gives Us A Peek Into Her Character 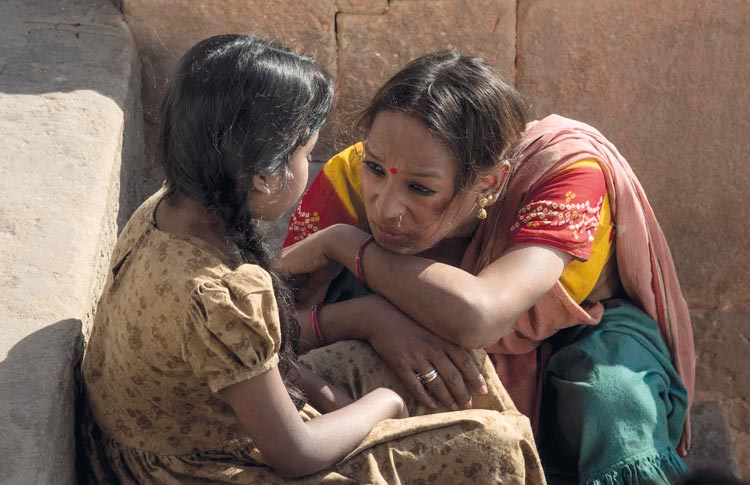 “It’s different, it’s profound, and most importantly it is weaved with dignity, unlike trans characters portrayed in Indian cinema,” says Rudrani Chettri, who plays the character of a transwoman named Anarkali in Vikas Khanna’s The Last Colour.

The movie is an adaptation of the celebrity chef’s book of the same title and through his debut, Vikas talks about the age-old tradition of not allowing widows to play Holi.

The movie also has a part involving a transwoman as an important character, which is played by Rudrani. As suggested by Rudrani, her character breaks the stereotypical image of a transgender person. And, who better to play the role?

Delhi-based transgender activist Rudrani herself broke stereotypes when she started India’s first transgender modeling agency. From bold photoshoots to fighting for the rights of the third gender, Rudrani has been vocal and upfront about her opinions. And with playing a powerful character in Vikas’ movie, she is bending the stereotypes ever more.

In a conversation with us, she gave us an intriguing peek into her character in the movie, which has Neena Gupta playing the lead, named Noor.

How did the role of Anarkali discover you?

Having no prior experience and interest in acting, I basically auditioned for the role by chance. Neeraj Tiwari, a friend of mine working with Anuj Tyagi (co-director of the movie), told me about the hunt for the role of Anarkali. Neeraj asked me if I knew somebody apt for the role and so in the process, I went to their office with two transwomen.

Oh, so the first time you went it wasn’t to audition?

Yes, it was for both of them. When I was about to leave, the casting crew asked me to audition as well. I did it. And when Vikas and Anuj saw my audition tape, they liked it. After a few days, I was asked to visit them and there was a contract ready for me to sign.

Let’s just say it was meant to be! Rudrani, tell us more about your character Anarkali.

The way Vikas has written the character is beautiful. It’s different, it’s profound, and most importantly it is weaved with dignity, unlike every other trans character portrayed in Indian cinema.

A still from the movie where Rudrani (Anarkali) is with the little girl.
Photo Courtesy: Rajesh Singh

I love and respect Vikas for building Anarkali with a different perspective, going beyond the “obvious” sides of the third gender, and keeping it fictionally real. I believe and I am sure, no Indian film has ever shown a transgender person with so much dignity.

That is so amazing to hear! Tell us more about your experience of working in the movie, with first time director Vikas Khanna and the exceptional actor Neena Gupta.

Oh, it, undoubtedly, was amazing! The warmth, the sincerity, the focus Vikas brought on the sets was infectious. I am happy to have made my (unexpected) debut with him. Talking about Neena ji, I was extremely excited and happy to get an opportunity to be associated with the movie that has her as the lead character. Although my role doesn’t get a chance to share much screen space with her, it was wonderful to even be on the sets with her. She is so warm and welcoming. In fact, the entire crew of the movie maintained an extremely comfortable environment for everyone.

Speaking of which, how was it working with a debutant director?

The movie, I believe, finished shooting in about 20-25 days, and I think it was possible because of exceptional teamwork. Everybody, and I mean every single person, was so dedicated, so flexible. It was maybe because everybody resonated with the idea of the movie so much, and appreciated the honesty through which Vikas was putting across a sensitive topic.

In the trailer of the movie, there is a scene where a policeman harasses you. Sadly, this still stands true when it comes to people dealing with trans persons. So, did you share any such personal experiences with the director and contribute to the story?

I am sure trans people go through a lot of atrocities, but I have been privileged to not go through any of it personally. And because the character in the movie comes from Vikas’ book, every scene in the movie, every depiction is through Vikas’ vision. It’s entirely his idea.

Rudrani, was there any kind of discrimination that you faced in the city Varanasi, while shooting?

Well, that way the city Varanasi is totally transphobic. I think they’re not yet able to accept transgenders. I heard sly comments passed on me, straight in the face, but like I said, the entire crew of the movie was like a family who supported and protected me.

Rudrani on the sets of The Last Colour in Varanasi.
Photo Courtesy: Rajesh Singh

There is hypocrisy and there is discrimination but there is a long way before everything falls perfectly. The thing is, a lot of times good things hide under the bad ones. So, I now only want to talk about how people are and have been nice to me and other transgenders. Let’s promote this form of expression more. This idea of equality and humanity needs to spread like wildfire.

Another thing that I want to highlight is, people often ask me ‘how can we help the community’, ‘what can we do’ and my answer is don’t do anything special. Treat us like you treat your other fellow beings. Let us breathe, let us live naturally.