RUBY KHAN: she does not play dolls anymore 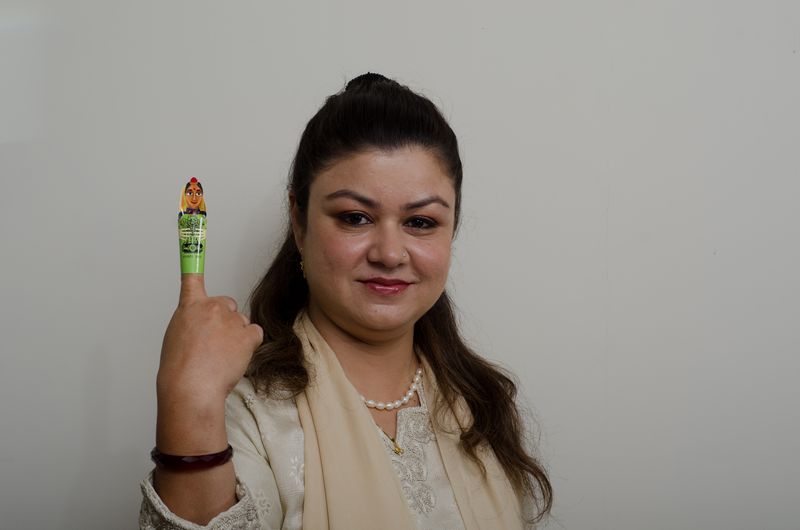 It is time to meet our 7th brave woman who was a part of the SHElection campaign: She does not play dolls anymore. A Human Rights Activist, Writer and a Journalist, Ruby’s hat is adorned with many feathers.

The photo shoot was to take place at Nayaab Jewels’ showroom that is supporting this campaign. She reached on time and greeted us. A little touchup was required before the shoot, but our Makeup artists denied to do so. Reason? The artist said ‘Ruby has pink cheeks, fair skin, perfectly arched eyebrows. What am I supposed to do?’ We burst out laughing. No wonder, Mrs. Khan was once won the Mrs. Jaipur Beauty Pageant.

Her Finger-puppet was a mother, cuddling India as her baby. This is Ruby’s vision for the 49% women voters in our country. Motherly, protective and armed to take care of her child. As she describes – ‘She has Indian in her arms. This, I feel, is the essence of Indian Female adult suffrage. Given opportunity she will take care of her country as a mother of her child.’

We started to put the camera and lights at the right place and shot our 1st question to her – What is the importance of 49% women share in responsibility for selecting the new government for our country?

From Ruby you can’t expect kicka** answers that we listen on our Television sets. She has lived with the needy rural India, she has fought with them, she has achieved with them. She speaks what very few in our country talk about. See yourself. “It is a great sign. Now they know whom they are dealing with. At least there will be some profound effect on policy-making towards women’s well-being,’ – said Ruby.

So is women empowerment on her agenda towards this election? Ruby said – ‘Much more. I have a vision for the youth of India. More employment opportunities for youth, the end of reservations, importance to pure merit. Only this can increase the quality of every sector. The west is cashing on it while we are lacking. Unemployed and depressed, Top Indian Rankers are suffering, and this bothers me.”

Also, she is blunt. Of course, in an effective manner. When we asked her what if she gets a chance to meet the PM candidate, what is she going to ask him? Her sharp answer was – ‘I will ask: What were the qualities of your opponents that you are impressed with and afraid of?’

This fighter lady was given an Emerald ring from Nayaab’s special collection which was endowed with yellow sapphire and diamonds. Wearing her ‘motherly’ Finger-puppet on the index finger and the Nayaab ring on another, Ruby enacted sharp scissors with her hand. Why scissors? Well, isn’t it her job to cut down the ill human actions from the society! The green emerald, in her case, is a symbol of love and peace, which is Ruby’s lifetime motto. She kept posing elegantly showcasing many powerful symbols using her puppet in the divine spark of emerald.

Suddenly she gives us an expression. Dense and considerate. We wondered if it was an effect of our discussion over the elections and women voters. And she said – ‘There is one problem in Jaipur I really hope to be resolved after this election. The drainage system of the city is still age old. The main drains choke, and homes are flooded with dirty water during Monsoons. I look forward to my beautiful Pink City getting a well working new drainage system which can keep it clean and its residents free from diseases like Dengue and Malaria.’ Khan has been in touch with many families in slum areas who go through such problems. The pain in her voice is just the compassion she has for this part of the society.

Listening to her about the lower class Indian families, we shot our another question to her – What level of individual independence a woman is achieving in her decision to vote? She said – ‘Women are coming out from the shadows of their male family members as far as casting a Vote is concerned especially in middle, upper-middle and upper class. But the problem lies with lower and BPL class where the lack of proper knowledge about the party, candidate and policies is the most disturbing. There is a good number of women who still vote for parties their whole family vote for, being totally unaware of the candidate or even a type of elections (Lok Sabha, Rajya Sabha, Municipality etc.). All they know is that they have to vote.’

Ruby remarked – ‘But there is something every woman can teach us. Women can teach our political candidates a management lesson for running our country! Like maintaining their dignity and moving ahead with their plans, thereby keeping their family intact. Political leaders should learn this basic chapter from the basic unit of the society, i.e. family and above all family’s life and soul – its women that we should not let go of our dignity and fight each other as the world is looking at us, some day it might result in breaking our home which is our country.’ True that.

Interestingly, we have women in top positions running our Rajasthan state. What about them? On this Ruby said – ‘We, the women, are definitely proud of our state and these women of substance for achieving the heights. Yes, women are empowered all over; they are coming out of their veils and setting one example after another. Be it punishing the eve teaser or refusing for child marriage or becoming the Sarpanch. They are getting their strength from these successful women and are themselves becoming shining examples of courage and success for everyone.’

She continued: ‘There are few things in a woman that make her voice heard in the crowd. They are a) Her Determination, b) Her Self-Confidence, c) Message Clarity and Meaningfulness, d) Her Selection of a Medium for giving a message, and d) Approach to the Masses.’

With the last few snaps remained to be taken, we asked her our last question –  What is a real definition of the freedom of women according to you. And she calmly replied:

‘Freedom in my view is freedom from our own closed mind sets which are making us blindly follow the west. Freedom is getting the best possible education, choosing the career, marriage, kids, etc. Freedom for a woman is to live her life on her own terms. But as rights come with duties, similarly freedom comes with conditions too – and I thoroughly believe that in the whole process of self-actualization, a woman must never de-root herself from her culture, traditions and most of all her femininity.’

You are a live example of your own statement Ruby. You are an inspiration.