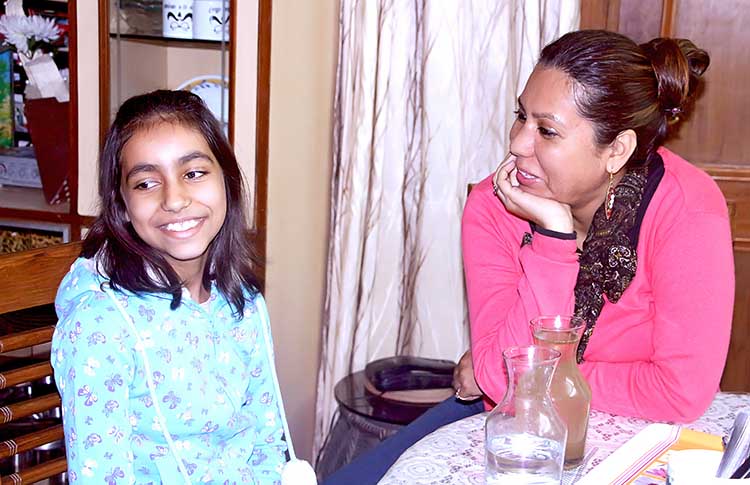 This Republic Day, JWB in association with Nayaab Jewels, searched for little heroes of Jaipur. With mothers by our side as inspiring companions, see how we unfolded some HERoic tales of the day.

Meet Anahita, a nine and a half-year-old, 4th grader and her mother Aashima (yes, precisely she is nine and a half, as she had a heated debate with her mother when she insisted that she was ten, but mothers know how to have their way). Anahita is one uncommon name so I couldn’t help asking her what it means.

Graceful, she beamed with pride! Her mother added that she was one intelligent, India-crazy girl! She remembers names of states and their capitals by heart. She even had a cake in the shape of Indian map for her last birthday!

Aashima told us that on 2nd October she once demanded, ‘Mumma, we cut the cake on everybody’s birthday, so today, let’s cut one for Bapu too!’  My jaw dropped open. Kids today are way smarter than we think they are!

Anahita also told me that there were two most important days in Indian history, one being 15th August, Independence Day, and the other which is today, 26th of January, The Republic day! And half of my job was done here, I thought!

Anahita couldn’t contain her excitement and just wanted her mother to reveal what she was going to learn today!

With perfect pink cue-cards prepared for the activity, Aashima began like a pro!

A mother tells a story of a hero to her daughter. #TakeTwo.

I presented Aashima with a pair of glittering earrings from Nayaab Collection that looked gorgeous on her and promised Anahita that the earrings had a magical power which would be revealed right at the end of the story.

So this is how we began: Sarojini Naidu, The Nightingale of India.

Aashima: Anahita, today we are going to learn about an Indian Female Freedom Fighter, Sarojini Naidu. Does that sound interesting to you? Well, Naidu was born on 13th February 1879.

Hmm… 13th February, Anahita tried hard to keep it in her memory.

Aashima: Sarojini Naidu was called the Nightingale of India, in Hindi, Bharat Kokila.

Aashima pointed from her cue cards some facts related to Sarojini Naidu, how she was an excellent poet, how she was the first woman governor of India, how she was one of the few women in politics at that time.

To this, Anahita popped up innocent questions like, what is a political party, who is a governor, etc., etc. Wow, we have one intelligent woman here!

When I asked Anahita what is that she likes about Sarojini Naidu, she added, ‘I think it must have been difficult for her to be a woman and be in politics at the same time. So I think she is a hero in her way!’  This was my eureka moment. I asked her, ‘Anahita, are you a hero too’?

Yes, I am, she uttered with a big smile on her face and sparkling eyes!

It was the moment where the surprise was revealed, and Aashima unclipped one Nayaab earring and pinned it to her daughter as a sign of heroism! What a perfect medal! Anahita exclaimed that she was fond of earrings, but this was a totally new cool way of wearing them! ‘I love it,’ she added.

While grinning from ear to ear, Anahita added that she wanted to be a famous dancer one day! Wow, we didn’t know she had this side hidden in her! She also showed us her ‘routine white board’ where she adds her daily activities religiously!

A new little hero was born this Republic Day! No fancy fairy tale, no prince charming, just a real life story of a HERo, sprinkled with some magic dust by lovely Mom!