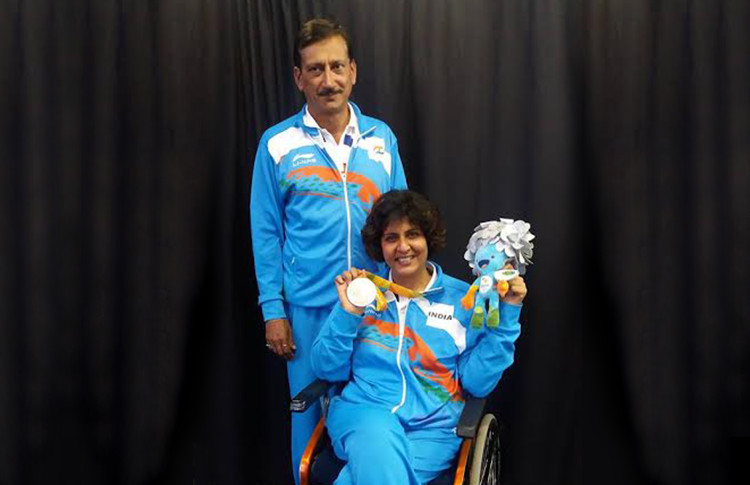 The first Indian woman to win a Paralympics medal, a motorsport enthusiast, and a motivational speaker, Deepa’s journey is inspirational.

As names of the National Sports Awards recipients for this year were announced on Saturday, NCR-based para-athlete Deepa Malik had a bittersweet moment. “I wish my dad had been here to see this,” said an emotional Deepa to the Times of India. Deepa Malik is only the second para-athlete to receive Rajiv Gandhi Khel Ratna, India’s highest sporting honour.

And, as she said earlier in an interview with IWB, “The journey wouldn’t have been possible without my husband.”

In her late teens, she met her soulmate in a park and because of her love for bikes. Well, read how she found the one, in her own words.

“I used to go for a run every day. Every day I saw this boy running, too. One day, he came with this gorgeous looking motorcycle. Oh, I so wanted to ride it. I went up to the guy and asked him to give me the keys. He asked if I would be able to manage it? I commanded to hand me the keys then and he did. I rode the motorcycle and pulled out few stunts and gave it back to him. I told him that I’d have married a guy who’d never ask me why I needed a motorcycle and would buy me one.”

“So, next day, he went to my father and said, “I will get your daughter a new motorcycle. Can I marry her? Basically, I was sold off just for a bike.”

But, saying yes to the man just for a bike was the best decision she ever made because her husband,  veteran cavalier Colonel Bikram Singh, stood by her like a rock in every up and down of her life.

During her childhood, Deepa was diaogonsed with Spine Tumor for which she had to undergo an intensive surgery and recovery. However, some years after her first child was born, Deepa started having difficulty walking again. After the checkup, she was devastated to know that the tumor in her spine was back.

“The doctors gave me seven days to prepare myself before getting admitted for the surgery. They had informed me of the consequences that in most cases, such surgeries resulted in paralysis,” she shared.

At this crucial time, Deepa’s husband was at the Kargil war. On the day of the surgery, the doctors asked her if she wanted to say or do anything before going in and she said she wanted to speak to her husband.

“They took me into the radio satellite room they had and connected me to him,” Deepa explained.

“I said, “I will never be able to walk again after the surgery. Over. I will get paralyzed below chest after it. Over. And he replied, “I will carry you in my arms the whole life. Over. Just don’t die and wait for me. Over.”