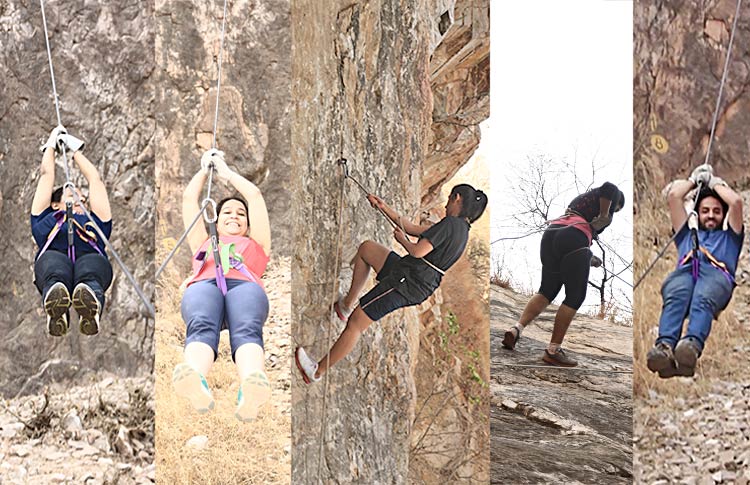 My house is very close to the Aravali ranges in Jaipur, and so, every time I go up to the roof, their setting against the clear sky blows me away. Wanting to climb the mountain, lying down and watching the clouds, all, seemed to be the perfect way to spend my vacations during school.

The dream did come true but in a different way. It was weekend and IWB needed an adrenaline dosage. We got in touch with Mr. K.N. Singh, the founder of Mountaineering and Adventure Institute, Rajasthan. He invited us to take our first step into the basic course of mountaineering.

IWB bloggers were given some instructions: wear loose trousers/shorts, sports shoes minus socks, and carry a water bottle each. Once our checklist was ticked off, the adventure began. Our cars jerked through the crooked path leading us to the base of the hills.

Mr. K.N. Singh, his dynamic wife and daughter, their entire team and a semi-circular “Mountaineering and Adventure Institute” board awaited us. Before beginning, they explained us about our safety, because, of course, safety first.

To be safe, you need to know that the rope you’re using is strong, and your instructors will keep you safe. And so, the rope that you will use to climb, rappel and slide down the mountain can hold a total weight of 2000 kg at a time. There’s the harness, which connects the rope to the climb. Shall we begin?

Mr. K.N. Singh told us about his guru Tenzing Norgay, yes he was taught by the ‘first man to climb Mount Everest’. The troop, as and when required, also are a part of rescue camps. Incredible, isn’t it?

While Jayati couldn’t stop cussing me for fixing such a ‘dire’ weekend activity, the rest of them hated me for waking them up at 6 a.m. Sanchit, however, was just psyched as me. He had his mountain shoes on! The mountaineering team was ready to kick our leftover-drowsiness.

We were supposed to climb up the hill through the cutout-path and swing down through the rope. Our mind was clouded with thoughts, though.

What we were thinking:

Ayushi: I’ve done it before in school, it shouldn’t be that bad.

Me: Heh. This should be easy. A piece of cake.

Lavanya: I just don’t want to die before having kids.

Jayati: Someone download the new Game of Thrones episode.

Yeah, in the midst of deciding how to go down the hill, all Jayati could think about Jon Snow and the Lannisters.

The Mountaineering team clasped our harnesses around our waists and told us a few tips: The metal loops would get really hot due to the friction after you slide down, do NOT touch them. For the same reason, we were made to wear mittens.

We stared down at the tiny Sanchit clicking our pictures, and then at everyone else. They were certain we were going to make it. Since Ayushi had done it during school, she went first. At a decent speed, she managed to land safely, and even though, so did Lavanya and Jayati, my mind kept poking me, “Why are they going so slow?”

Which led me to make the mistake of letting my hands easy on the rope… I was supposed to hold it tighter in order to avoid banging my head into the ground. But shoooo went my body. Whew. Luckily, there was someone waiting to control my speed at the foothills.

Mrs. Singh told us how every year they travelled to the Kailash ranges, and also showed us some pictures. However, we didn’t realize until now that she was only trying to divert us from the upcoming exercise. Task two was to climb up a slightly slanted rock. A rope, that was hooked to a steel loop at the top of the wall, was hanging down and one of the Mountaineering team members was holding it. The other end of the rope was tied around one waist at a time.

Mr. K.N. Singh’s daughter, who they lovingly called Joy, demonstrated how to do it for us.

Really, this one was tough. Even though we performed the task one after another, halfway through, the cuts in the mountain would end.

At one point, Jayati was swinging from the rope, and sorry bro, but I couldn’t contain my laughter. I giggled in the corner and was unheard thanks to the motivational quotes going out for Jayati.

But then again, I was no hero either, at one point I swore I was singing, “Hold me now, I’m six feet from the edge…”

A steep hill about the height of Mount Everest had to be conquered. Climbing up the cut mountain was less scary, but once we reached the top, the scenery below gyrated our nerves. We were asked to stand close to the rock, otherwise, we’d have fallen hard, and smashed our faces like watermelons (Yes, Jayati, it is the Game of Thrones reference to Oberyn Martell).

Here’s what was going on in our minds:

Lavanya: Who will take care of Poppy when I’m dead?

Me: That’s f*cking steep. I should get an award for climbing it down.

Jayati: Nope, not happening bro. You don’t have to do it. Nope, nope, nope.

Sanchit: Someone take the camera from me, I want to do it!

And that’s when Mr. K.N. Singh called out to Jayati from below.

Jayati: I’m just coming down. Can’t do it!

K.N. Singh ji: You can’t come down, now. It’s easy to climb it and very tough to come down. I’d say rappelling is easier.

The instructor encouraged her and slowly, she came on board. Jayati placed her feet at the edge of the cliff. Even with expressions of bewilderment and panic, she didn’t lose her courage. With a strange sensation of adrenalin going down her spine, she descended.

She was followed by Lavanya, and then me.

Here are a few rules to rappel down:

Hold the rope behind your back from the right hand.

Hold the rope tied to your stomach from the left hand.

Don’t worry, you’ll be given mittens.

It was Sanchit’s turn to rappel down, and he quickly took the position. Like a pro, Sanchit rappelled down while Jayati filmed a quick video.

Once we all were safely at the base of the hills, it felt no less than a dream conquered. Sure I didn’t lie on the peak and look at cloud formations, but I figured out how to climb a mountain. We all did and added a feather to our rather naked (whoops) caps.

The experience taught us that no matter how uphill the battle maybe, if we believe in ourselves, we’ll never fail, and at the end, everything will be alright.

By the way, here’s a shoutout: Mountaineering and Adventure Institute, Rajasthan is organizing a ten-day basic course of mountaineering and rock-climbing. Sign up for it here. You can also call Mr. K.N. Singh directly here: 9414040401