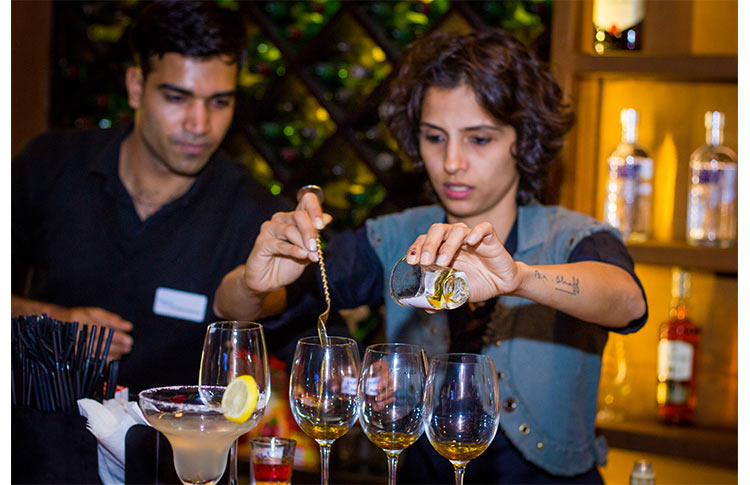 The clock had struck 6. Ingredients were set up on the tables. India’s leading bartender, Ami Shroff was behind the bar at the House of People, making last-minute arrangements.

We could see more infusions than the day before, and the tables looked more glamorous than any of us inside the House of People.

Before Ami would go on to begin the workshop, I had some Absolut-ly quirky questions prepared for her.

Me: One Absolut-ly underrated cocktail.

Ami: There is no such cocktail. To each his own. I might not like a LIT, but I could love a Gin & Tonic.

Me: One Absolut-ly ridiculous myth about bartenders?

Ami: Um, I don’t know, maybe that people tend to think that we’re always drunk, but really, we prefer not to drink while we’re working.

Me: One Absolut-ly no-no mix?

Ami: Never mix citrus-based things with milk-base, it will just ruin everything.

Me: One Absolut-ly go-to drink to deal with…

Ami: Haha, that’s no different from a breakup! So shot, again!

Me: An impossible boss?

Ami: Actually, just invite them for a drink, and you’ll win your Boss’, heart.

Great idea! Get your boss sloshed, and you’re sorted! Day two of the bartending workshop wasn’t just going to be about mixing… no, expect a lot of mix-n-match.

The measuring cup from the day before was back, too, yeah the same thing that looked like an hourglass.

Today, the participants had mastered the art of the shake-shake. Yeah, and that’s why when one of them did it flawlessly, the entire room cheered for them. Or, maybe it was the welcome drinks talking. *wink*

This one managed to replicate Ami’s Cosmopolitan:

Even though the backbenchers were making some noise, our teacher Ami was an Absolut stunner and knew how to get their attention fixed. No, don’t worry; it involved no chalk-aiming.

The ball-charmer was back and proved to be a hit again. The spell had hit us harder than the day before. Her hands, again, seemed to use some sort of a magnetic energy to control the ball.

We moved back to our tables to learn more cocktail recipes. Yeah, we were psyched. Most of us who were not dieting (somebody kill me), were able to get access to the delicious pizzas. I had to fill my tummy with the aroma. Though, the aroma was too, intoxicating.

Our WOMANager Juhi Jain, who had played a huge role in getting the event together, was carefully taking the notes, and like a sincere student, pouring the cocktail out of the shaker.

Ahem, we also had participants who made two portions of the drinks and got Absolut-ly happy high by the end of the night. *wink*

Since most of us had learned a lot the first day, we felt more like professional bartenders. It was time to learn how to make a Margarita!

We were asked to create a salt rim by first rubbing lemon along the Margarita glass’ rim, and then placing it on a plate of salt.

Slurrrpp. We were already beginning to feel thirsty. Also, Lady Boss Ana wouldn’t say it, but she was already a little tipsy by this time. How do I know? Well, because her cats weren’t mentioned even once.

Ami then caught us all by surprise, when she told us that it was time to make our own drinks, and that wasn’t it! The winner was going to get a reward! Aaaaaagh!

The three tables got really busy working, it was a test that we all had to pass. We all did a lot of hocus-pocus, feeling like true potion masters, mixing this into that. A lot of arguments happened, many glasses were spilled, oh my God, it was war.

Table two created a burgundy colored concoction and named it Dark Fantasy. There was a certain cocktail called Beyond. Our table was the most desi of all. We created a pretty pink Desi Shararat & an orange-red Banarasiya. Please forgive me, the drinks left me a little ignorant of the other cocktail names.

“Hmm, what’s that smell? Smells like team spirit?” That’s probably what she was thinking.

“Are you kidding me? Your faces should be as red as this drink after making such a blunder!” Ami, is that what you were thinking?

Ami tasted all of them, and her expressions did the rest of the talking. The winners at table two, who’d created Dark Fantasy got party sunglasses and pom-poms as their reward.

After we lost *sob*, we were brightened up by Ami’s fire show, which also had some new tricks that we hadn’t seen the day before.

Like a badass, Ami just managed to leave us all awestruck, and all bloggers fangirling. Day two concluded with some twisted walks, newly gained liquor vocabulary, and a lot of swag.