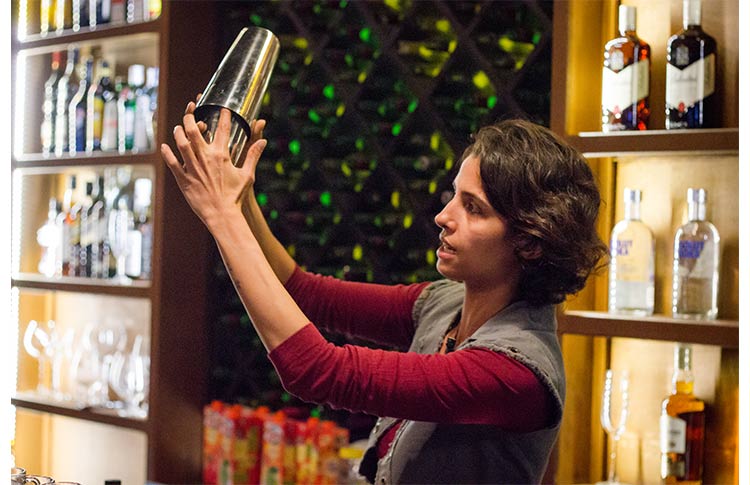 The tables at the House of People were set. The glasses reflected the lights on the ceiling. Each glass was labeled with the ingredients they contained, and no, they were not only liquors. We spotted some mysterious spices, even strongly brewed tea, heck, beetroot, too. This stuff was serious. The Mixology was about to begin.

Ami Shroff, India’s leading Flair Bartender, was fired up and ready to begin the show. Before introducing herself, Ami brought out, what seemed like a crystal ball, and the workshop began. I realized at that moment that I didn’t need alcohol to get high, what Ami was doing seemed sufficient. She had the audience hooked to the art.

Her hands looked like they were magnetic, she truly seemed to be the ball-charmer. Who knows, maybe she’d cast a spell on it!

Ami invited the participants to come forward and handed them all rubber balls. I also pushed myself to the front to learn a few tricks to impress the friends who often forget to invite me to their house parties. Hmmph, this will ensure that they do!

We learned how to juggle with the balls, and a couple of tricks that I’ll only tell you if you come for the second half of the workshop, today! And it is only then, that you’ll be able to have some Absolut fun.

Everyone had taken their seats before I asked Ami some questions:

Me: Have you ever been so drunk that you invented a cocktail?

Ami: Actually not! I try not to mix work with partying! Although, my work has a lot to do with partying, but still! When I’m getting drunk, I don’t try to think about work, because, the result is not pretty.

Me: Have you ever made a move on someone by offering them a cocktail on the house?

Ami: I often do that when I find someone really interesting, and it doesn’t happen just because I’m attracted to them. But, most events I do, the drinks are generally on the house, so that rarely happens!

Me: What other talents do you juggle apart from bartending?

Ami: Juggling, for instance! Apart from that, I love Mountaineering and rock climbing. I do want to learn surfing, as and when I get a chance! Also, trust me, mountaineering also helps you with balancing.

Me: Who do you generally drink and dial to?

Ami: Whoever my partner is at that moment!

What an Absolut-ly wonderful answer.

Ami took her place behind the bar counter, and the mixing of the drinks, and oh so much more, began.

The music playing in the background was kinda forcing us to gobble down all the cups that were full of Absolut happiness. *wink* But, I realized that it was a work event, and also, Photographer Pallav had zoomed the camera right into my face. Well, Pallav, you’re an Absolut UGH!

I couldn’t stop myself from staring at the Whisky, the color looked so beautiful. It was infused with something, but I couldn’t figure out what. A participant told me, “It’s star anise, that color comes out so well only with some Whiskies, in this case, they have used the Ballantine’s.” He sniffed it and said, “Yes, definitely Ballantine’s.”

I confirmed with Ami, and oh boy, the participant turned out to be correct. My favorite Cocktail was the one that tasted ‘Bloody Awesome,’ it felt so good that Ami had rightly named it Bloody Awesome.

We took the hourglass doppelganger measuring cup and started pouring the liquids in the shaker.

First, 50 ml of the Absolut Vodka was poured in. Can I tell you a secret, I felt like the Potions Master from Harry Potter. The kind staff from House of People kept telling me the quantity to put in so that I would not make a fool out of myself in front of the other participants.

After 30ml Cranberry Juice, Pomegranate Juice 60ml, 30ml grape juice, and 10ml beetroot juice went in the shaker. It was time to pour in some ice. The tongs were giving me a hard time, enter the super cool staff at the House of People, who helped me out.

While shaking it, we actually felt like professional bartenders who’ve got the swag. Guess what? We even managed to synch the shakers with the music. Yeah, all my friends will call me to those house parties, again.

Yeah, all my friends will call me to those house parties, again.

We strained the cocktail in a tall glass with ice and garnished it with rose petals. Ah, it tasted like red Christmas in my mouth.

While the participants munched on the pizzas, cigar rolls, and Hara Bhara Kebabs, some even got a wee-bit tipsy. It’s okay, happens every time.

Before the Day 1 of the workshop was concluded, Ami, garnished it with fireworks, literally. It was like she was a superhero with some superpowers to play with fire!

And what a start ?? The first day of our #Bartending #Workshop was “Bloody Awesome.” Well, that’s just one of the #Cocktails we learnt to make! Country’s top #bartender has definitely fired up our #vodkabulary by teaching us some cool #juggling skills while we created our own crazy mixes. ? . . In case you want to join us tonight for the workshop from 6-8pm at @houseofpeopleclub, just drop by! Today Ami will teach more about #Mixology and #FlairBartending. Let’s turn your #weekend into @absolute fun! ? . . PS: Free drinks. #Jaipur #Saturday #WeekendDoneRight

For a second, we were worried that she would burn her hair, but Ami had told us, “Burnt hair smell really bad,” so had that been the case, we’d probably have gotten to know!

The Day 2 of the workshop will have much more than just cocktails. Expect more tricks with balls, sorry FIREBALLS, concoctions that you’d never have tasted before. Also, today, you’ll be experimenting and creating your own blends, all of this, while sipping drinks and munching on House of People’s delicious snacks.