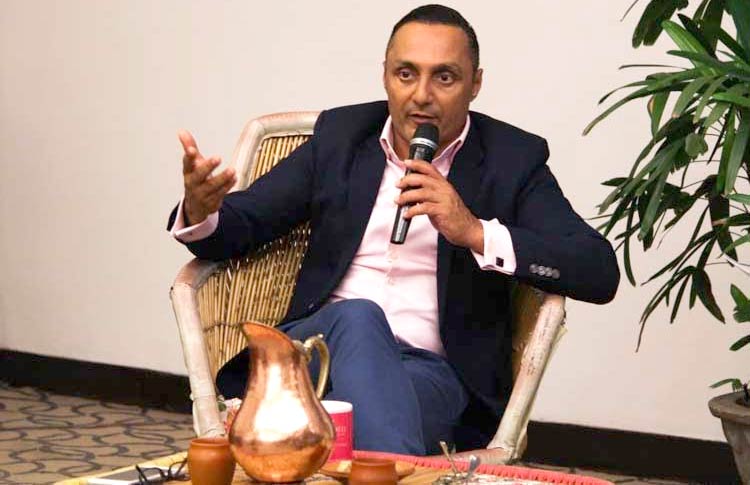 Remember, we told you about Rukshmani Kumari who extensively works towards the betterment of rural kids in Rajasthan? Well, extending her warmth towards enhancing their lives, she conducted a talk show ‘Chaupal’ with the actor, director, social activist and former International rugby player, Rahul Bose in Jaipur yesterday.

In association with Prabha Khaitan Foundation, Rukshmani Kumari hosted a chat with Rahul Bose where he talked about his second directorial venture and the upcoming film, Poorna, his views on feminism and his transition from an actor to a director.

Who is Poorna for you, Rahul?

Poorna is a tribal girl who made a world record of climbing the Mount Everest at a young age of 13! And she doesn’t come from Garhwal or north east but from Telangana, which honestly is as flat as my hairless head.

There’s no culture of mountaineering in Telangana. Thus, coming from the plains and climbing up the mountain gets even more difficult. The oxygen in the air gets reducing as you climb higher. She was undereducated, nutritionally deprived, geographically not close to mountains, physiologically backward, a 13-year-old girl from a random village in Telangana to summit Everest, you just have to ask yourself what were those set of circumstances that made the impossible possible.

Poorna is an unbelievable and spine-chilling story of a girl who is undereducated, nutritionally deprived, haven’t lived geographically close to mountains, physiologically backward, but achieves something that most of us would dare to dream. When this 13-year-old girl from a random village in Telangana reaches the Everest, you just have to ask yourself what were those set of circumstances that made the impossible possible!

This biopic transcends the sport, for me. The film is not about ‘Everest kaise climb karti hai.’ It is about kahan se aayi hai ye ladki aur Kahan tak pohochti hai. Aur agar is desh me officers passionate aur visionary hote toh is desh me hum kya kuch nahi kar pate. ( The film is not about how she climbs Everest. It’s about where she has come from and how far she can go in her journey. And, if we had passionate and visionary officers in our country, India would have touched glory.)

So Poorna for me is actually a love poem to India. When India gets it right, we are glorious. There’s nothing quite like this country.

We wonder, would you have made a film if Poorna was a boy?

I don’t think the movie would have been this special had there been a boy protagonist. See, all of us have to accept the fact that it is a hard life for Indian girls as compared to boys. The reason can be that girls don’t get enough opportunities. And if one looks at the prevailing misogyny and patriarchal mindsets, life gets tougher. It is incredible, how in our country, parents still have to fight neighbors, relatives, and the society if they decide to do something for their girl child!

Do we get to know any amusing conversation you had with Poorna?

There wasn’t any! All we talked about was Everest and why she wanted to climb it. I asked her what she felt when she saw those six dead bodies. About how terrified she was for the FIRST time in her life when she decided to go ahead because she wanted to show ‘Ladkiya kuch bhi kar sakti hain’ (girls can do anything). she has the wisdom of an 80-year-old, of course with the mischief of a 16-year-old.

Having strongly advocated for women rights to be as equal to men, should we say you are a feminist?

How did you find Aditi who plays Poorna in the film?

We were trying to find a Poorna from a tribal school since real Poorna belongs to rural Telangana. After auditioning over 500 girls, approximately 100 were shortlisted, but I was not satisfied. Then one day I found Aditi, who is not from a tribal background, but from Hyderabad. I remember it was 9:30 in the night and she and I both were very tired. I sat right in front of her and gauged her eyes because I believe they should be most expressive to become an actor. I then asked her what is the saddest moment of your life? She replied it was when my grandfather passed away last month.

I asked her if she misses him and remembers the way he smelled or held her hand. Listening to me, she started crying. That was the moment her audition began. I did this to crack her up because filmmaking is all about pressure – time pressure, money pressure, location pressure and much more! Thereby, I’ll leave you to rate her performance but for me, she was terrific!

I can’t wait to watch her act! What is your most emotional moment from the film?

So I have read the script about 500 times and lived with it for 2000 nights but when Aditi walked up at this Everest summit mock-up, I started to cry. It was something that I felt she was feeling, too. At that moment, I thought about Poorna. What she would have felt when she touched the summit? It must have been the end result of so many of her aspirations. How many kids’ hopes was she carrying on her shoulders? And for those who haven’t seen the film, I must tell you that before Poorna completed her journey, she saw six bodies but nothing could dampen her spirit! I was so moved at this moment.

You’re multi-talented. Do you have a hidden talent we don’t know about?

I whistle very well! I can an Olympian whistler, you see! One day I’ll whistle in a film, wait for it. I can do the background music, the drums, everything a song needs, I can fulfill by whistling. I hope the filmmakers are reading this.

At that, I’m also excited about your future projects.

I am writing something in July. That is set in the underbelly of Bombay and has a big fat heart. It is about a woman who I call a tigress. If I am being able to write her the way I have thought, I will make her meet you in a year. She is like a love song to me.