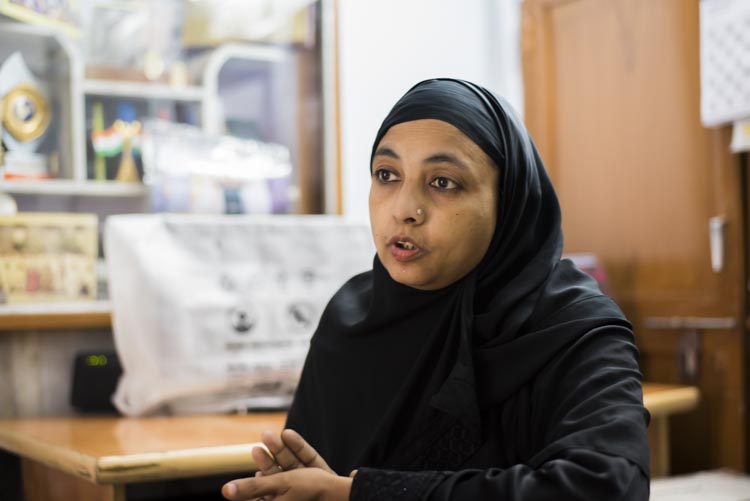 In 2017, breaking down stereotypes, Jahan Ara along with Afroz Begum became the first women Qazis in Rajasthan. They completed a two-year training course from Mumbai-based Darul Uloom-i-Nisawa. Ara now participates in the Sharia court run from the office of National Muslim Women Welfare Society in Jaipur.

During a candid chat with IWB, Qazi Jahan Ara shares her journey and how she plans to bring about positive change while taking note of the present condition in the society.

I can never forget that first day in my life. I was very happy that I had passed the Darul Uloom-i-Nisawa examination. It was an achievement for me as 32 other women had given the exam and only 15 cleared it and I was one of them. Same day, somehow media came to know and this small office of National Muslim Women Welfare Society was jam-packed with mediapersons. But there were many other people from our community who raised questions on our course. I was also ‘LIVE’ on many channels and the panelists on the programme started arguing about woman becoming a Qazi. I had to face illogical questions by the people from my own community on LIVE television. It was shameful. There were arguments like how as a woman would you go to solomnise nikaah at 3 am. Some even raised the question as to how can a woman study.

How do you respond to such comments?

Well, all those should know that the first verse (aayat) of Quran gives every human being a right to study. It does not differentiate between man and woman. It was first time in my life that I was witnessing the prejudices of patriarchal society, firsthand. I felt very bad. But still I remember that day as one of the most important days of my life.

Now as Qazi, how do you deal with the cases that come to the office of this welfare society?

We hold counseling sessions here and while I was studying to become a Qazi for the last five years, I always kept coming here and participated in the cases. I see and understand an issue from the point of view of Quran. I always refer to the teachings of Quran while dealing with the cases. Our understanding comes from four pillars of Quran –insaaf (justice), Baraabari (equality), aql (intelligence), and raham (mercy). Unfortunately, while dealing with cases we have experienced that understanding about all the four things are missing from the community. In case of women, equality is absolutely absent from the mindsets. Justice is never done with women. Men always find fault in women’s character. Also, intelligence is completely done away with in the working and living of the whole society. And when intelligence is absent, there can be obviously no place for mercy. Whenever cases of differences between husband-wife come, our efforts are to understand the inequality among their rights. We hear both the parties. We then hold joint sessions where both husband and wife can sit together and sort out their differences. In most cases, from beginning, the couple knows who is wrong among them. We try to bring that acceptance of opinion.

According to you, what is the biggest challenge that Muslim women face in society?

Undoubtedly, the biggest challenge is Education. As far as modern education is concerned, Muslim girls are just exposed to basic education. And when it comes to the religious education, the matter is even worse. We send our children to mosques and madrasas to study Quran. The problem is that though they study Quran in Arabic, they do not understand it. This is the biggest issue that mars the Muslim community. It took 23 years for the Quran to nazil on the Nabi. It wasn’t written in a day. But, we are ignorant about the teachings of Quran in spite of reading it. There are 200 verses in the Quran that dictate Islamic Law. Out of these 80 verses are for the benefits of women. Still, what is the reason that women are in such bad shape in our community. The male-dominated religious sects have never propagated these verses and we have never read the Quran with tarjuma (translation).

Did you face any challenges in the path of becoming a Qazi?

My parents are not in this world. I live with my sister’s family and everybody supported me and encouraged me in my journey.

After becoming a Qazi, does life throw challenges daily at you?

No, it is not like that. Although there are some challenges which we initially faced like how a woman can be a Qazi. I would like to tell that 95% Muslims follow the maslaq of Abu Hanifa Rahmat Ullah Aly. Abu Hanifa has written in book Maslaq-e-Hanafi that a woman can be a Qazi and her decisions will be agreed upon by the community. Scholars have accepted this argument. We have become Qazi after studying Indian constitution along with Islamic law. We have appeared for both theory and practical examinations. The responsibility of a Qazi is not only to preside over weddings, but also bring in positive change taking note of the present condition of the society.

What does a woman have to do in order to become a Qazi?

First of all, the woman, who is training to become a Qazi must realize that whatever she is studying are the orders of Allah. She must believe in the knowledge of Quran and be ready to question any wrongdoings in the society, which she thinks is against the teachings of the Holy book. Like, there is no scope of triple talaq in Quran. It must have happened for the first time somewhere and because the teachings of Quran were not referred to, the wrong practice continued. She has to accept the challenges of various kinds of wrong mentalities that have taken shape during a course of many years. Like, the issue of meher rakam, which is decided at the time of nikaah but never paid to the wife. So, there are challenges but I believe women are strong enough to cope up with them in their path of becoming self-resilient.