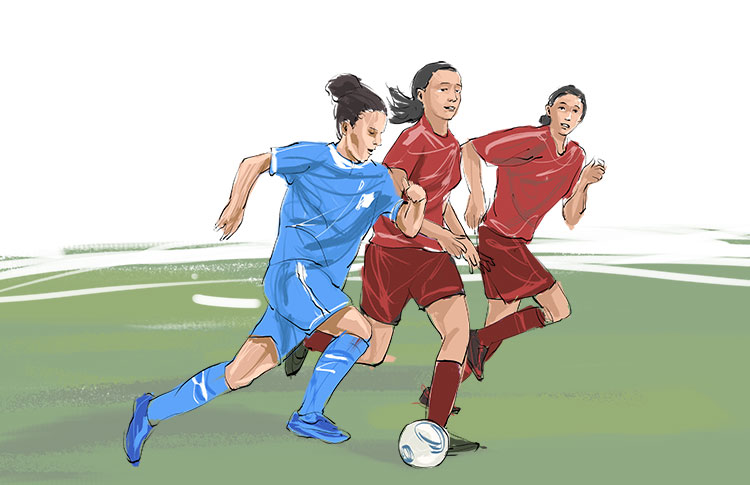 The focus, dynamism, and dedication that goes into the making of a great sportsperson remain unparalleled. If you have ever witnessed the life of a sportsperson closely, you’ll know that hard work is paramount and the struggle real. This struggle gets even more pronounced for sportswomen, especially in the patriarchal Indian setup where a sports field is not always looked at as the right place for women.

We, as a country, have for long overlooked our sportswomen. This is why IWB decided to take charge and share narratives of these gritty women to bring to them the much-deserved attention and accolades with The Locker Room Talk campaign.

The campaign has been all about celebrating Indian sportswomen and their love for sports. It is our homage to these gritty women who strive to bring pride to the country and our effort is to bring to them the much-deserved accolades. We aspire to push them to tackle and brush off every obstacle in their way, as they go ahead playing every game like their best game ever.

We at IWB believe that every sports team deserves an anthem! With the same conviction, we initiated our unique campaign, ‘The Locker Room Talk.’ Under the campaign, we connected with the Indian women’s Rugby, Ice Hockey, Football, and Kabaddi teams and, through expansive and comprehensive conversations, tried to get acquainted with them.

The result of our conversations culminated into custom-made anthems for each of the teams curated by our super talented in-house vocalist/songwriter Komal Panwar. These songs reflect the passion of each of the teams while encompassing their energies.

All the teams that we reached out to are admirable for their individual USPs. The Indian Women Football Team, for instance, is the most diverse of them all, with team members from different parts of India.

Our conversations with the team revealed that “passionate, inspired, and skilled” are the three words that best describe them. We got to learn about their dynamic approach to every match and how they play with the belief that “every game is a new game and a new opportunity to make your team proud, so step on the field and give the best you have.”

We were also told that “The more difficult the victory, the greater the happiness in winning,” is the quote that the team swears by.

We have attempted to translate the very same passion, zeal, and drive into the song that has been custom-made for the team. Consider the following lyrics:

We have paid special attention to the chorus in this song so as to bring out the diversity of the team and how when channelized correctly it becomes the very strength of the team. Following are the chorus lyrics:

Here is the full song:

Kick the boredom with IWB’s anthem for Women’s @Indian Football Association. Chant for them! These girls have balls, see them taking on the world! #TheLockerRoomTalk campaign aims at creating…

The Indian Women’s Football Team responded with great enthusiasm when we reached out to them for their feedback. Captain Bala told us that the song charged them all up. “The song is so inspiring. It directly reaches the heart! We really needed something like this,” said the captain.

As we share these anthems, we want the entire nation to broaden its horizons, give these women’s teams, that lurk at the precipice of oblivion, a chance to shine through and chant their team anthems, in unison and aloud. Let us all represent them with as much pride as they take in representing India.